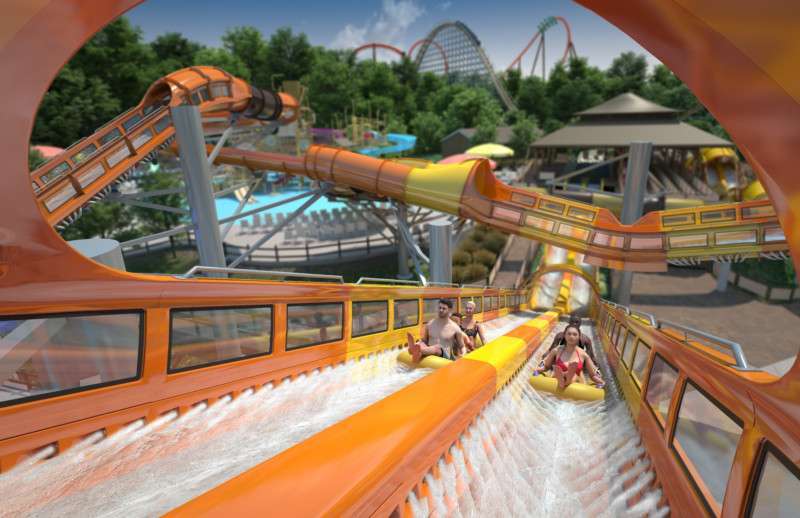 The ride features the first-ever head-to-head dueling zone on a water coaster, as well as two other RallyPOINTS™ where rafts will synchronize with one another. Each side also features two FlyingSAUCER® elements—which create “a faster and tighter ride with stronger g-forces,” as well as “maximum curving speed and centrifugal force,” according to manufacturer, ProSlide.

“Cheetah Chase is the perfect thrill ride for families. The three-person rafts allow families to race face-to-face, and the launch is the first of its kind,” says Holiday World’s president, Matt Eckert. “There’s nothing like this out there.”

With a total investment of approximately $7 million, Cheetah Chase is the world’s first full-circuit racing water coaster. It will travel at 30 feet per second and will have the tallest RocketBLAST® section in the world—27 feet tall. Each side will feature five RocketBLAST® sections: one flat and four uphill.

Holiday World & Splashin’ Safari’s existing water coasters Wildebeest and Mammoth have been voted the #1 and #2 water park attractions, respectively, by the Golden Ticket Awards presented by “Amusement Today.”  Wildebeest has won the #1 spot for nine consecutive years and Mammoth has been certified by Guiness World Records as the world’s longest water coaster.

“With the addition of Cheetah Chase, Splashin’ Safari will now be the undisputed Water Coaster Capital of the world,” adds Eckert.

Joe Kleimanhttp://wwww.themedreality.com
Raised in San Diego on theme parks, zoos, and IMAX films, InPark's Senior Correspondent Joe Kleiman would expand his childhood loves into two decades as a projectionist and theater director within the giant screen industry. In addition to his work in commercial and museum operations, Joe has volunteered his time to animal husbandry at leading facilities in California and Texas and has played a leading management role for a number of performing arts companies. Joe previously served as News Editor and has remained a contributing author to InPark Magazine since 2011. HIs writing has also appeared in Sound & Communications, LF Examiner, Jim Hill Media, The Planetarian, Behind the Thrills, and MiceChat His blog, ThemedReality.com takes an unconventional look at the attractions industry. Follow on twitter @ThemesRenewed Joe lives in Sacramento, California with his wife, dog, and a ghost.
Share
Facebook
Twitter
Linkedin
Email
Print
WhatsApp
Pinterest
ReddIt
Tumblr
Previous articleADG’s WaveTek wave generation systems turns 50
Next articleAntonio Ramirez to manage Thinkwell’s EMEA projects