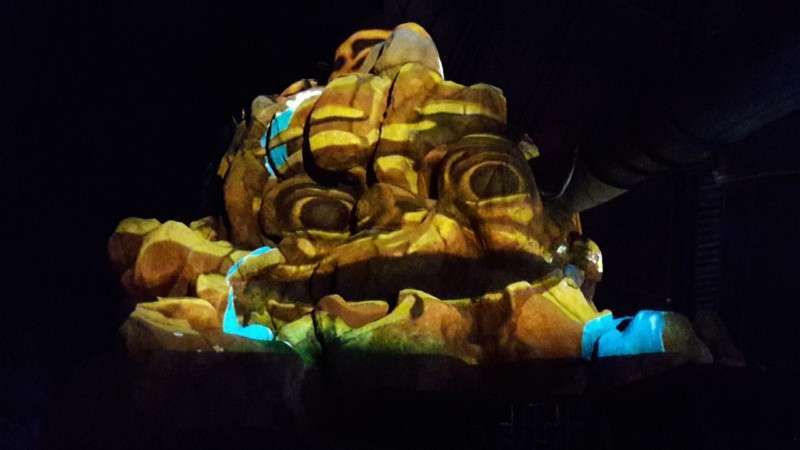 Fantasy Island theme park, UK, has unveiled a projection mapped experience that brings The Mystical Mountain to life, creating a new feature area and twice daily show. With the entertainment spanning into the evening, visitors are staying in the park for longer, regardless the weather, resulting in an increase in guest spending.

The Mountain has been created on existing 40 ft high mountainous theming within an indoor area at the center of the park. This used to be an atrium space but the ceiling has been covered to create the new atmospheric and highly themed leisure and relaxation destination.

Holovis show produced the whole experience, starting with the narrative that underpins the show and the Holovis Media concept and character artists created the central character of The Mystical Mountain. The Holovis Attraction team of engineers specified and installed the three Barco F90 laser based projectors and the Green Hippo Hippotiser that bring the show visuals to life.

The key shows take place at 1 pm and 9:30 pm, but during the day The Mountain can be seen sleeping, with butterflies sweeping past him and lizards inhabiting the lower rock faces. Within the show sequences, gushing water and explosive larva eruption visual effects are integrated perfectly with lighting, audio and SFX for a full multisensory experience.

Peter Cliff, Creative Director at Holovis explains: “Due to the physical finish of the theming, which resembles uneven mountainous terrain, the mountain was not an easy surface to projection map on to. We first captured a lidar scan of the desired area then worked from the point source data obtained. The result is a multipurpose canvas that Fantasy Island can easily update with new seasonal shows throughout the year to keep audiences engaged. The main show takes place in the evening so guests are staying later into the day, increasing the spend per head and resulting in a tangible ROI benefit for the park owners and operators.”

Edward Mellors, Director, The Mellors Group comments: “We wanted a new feature that would vastly augment the expected visitor experience and have certainly found it within the projection mapped show. This dynamic visualization is something that many of our guests have never seen in person before so they plan their day around attending the evening show. It’s great to have a none weather dependent feature that can be so easily updated with new content.”

Joe Kleimanhttp://wwww.themedreality.com
Raised in San Diego on theme parks, zoos, and IMAX films, InPark's Senior Correspondent Joe Kleiman would expand his childhood loves into two decades as a projectionist and theater director within the giant screen industry. In addition to his work in commercial and museum operations, Joe has volunteered his time to animal husbandry at leading facilities in California and Texas and has played a leading management role for a number of performing arts companies. Joe previously served as News Editor and has remained a contributing author to InPark Magazine since 2011. HIs writing has also appeared in Sound & Communications, LF Examiner, Jim Hill Media, The Planetarian, Behind the Thrills, and MiceChat His blog, ThemedReality.com takes an unconventional look at the attractions industry. Follow on twitter @ThemesRenewed Joe lives in Sacramento, California with his wife, dog, and a ghost.
Share
Facebook
Twitter
Linkedin
Email
Print
WhatsApp
Pinterest
ReddIt
Tumblr
Previous articleTRIOTECH’s Fear the Walking Dead Survival Opens on Las Vegas’ Fremont Street Experience
Next articleTEA SATE 2017 Sessions and Speakers Announced