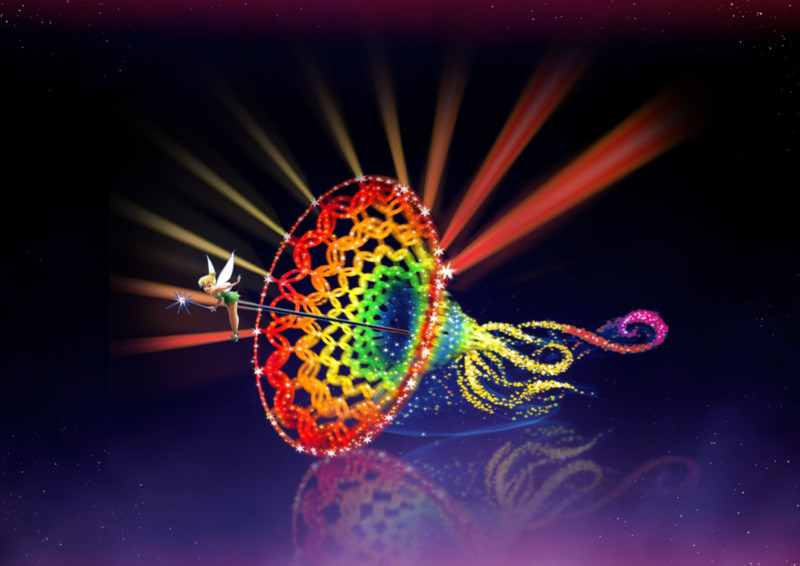 Hong Kong — Using a magic paintbrush and his vivid imagination, Sorcerer Mickey will light up the night with dazzling colors at the launch of “Disney Paint The Night”, the new nighttime spectacular coming to Hong Kong Disneyland in October 2014. The parade will mark Hong Kong Disneyland’s newest chapter after the completion of its three-part expansion project last year. It will appeal to both families and young adults, further boosting the attendance and business of the resort.

“Disney Paint The Night” will immerse guests in the color, energy and magic of an all-new nighttime spectacular through interactivity, inviting them to paint the night with their favorite colors.

Harnessing the scintillating power of Tinker Bell’s pixie dust, Mickey has enchanted his brush and painted visions inspired by classic Disney Pixar stories. Lightning McQueen, Sulley & Mike will be found in a Hong Kong Disneyland parade for the first time ever. Tinker Bell, Ariel, Belle, Buzz Lightyear & Woody, and many other beloved Disney friends will also immerse onlookers in a world of light and color along Main Street, U.S.A. each and every night.

Hong Kong Disneyland will continue to bring magical experiences to guests from far and wide. Apart from the nighttime spectacular, the resort will launch new offerings to celebrate its 10th anniversary in 2015. The first ever Marvel-themed area based on Iron Man will debut in Hong Kong Disneyland in late 2016. Another new resort-style hotel with 750 rooms will open by early 2017 after all necessary approvals have been obtained.

Joe Kleimanhttp://wwww.themedreality.com
Raised in San Diego on theme parks, zoos, and IMAX films, InPark's Senior Correspondent Joe Kleiman would expand his childhood loves into two decades as a projectionist and theater director within the giant screen industry. In addition to his work in commercial and museum operations, Joe has volunteered his time to animal husbandry at leading facilities in California and Texas and has played a leading management role for a number of performing arts companies. Joe previously served as News Editor and has remained a contributing author to InPark Magazine since 2011. HIs writing has also appeared in Sound & Communications, LF Examiner, Jim Hill Media, The Planetarian, Behind the Thrills, and MiceChat His blog, ThemedReality.com takes an unconventional look at the attractions industry. Follow on twitter @ThemesRenewed Joe lives in Sacramento, California with his wife, dog, and a ghost.
Share
Facebook
Twitter
Linkedin
Email
Print
WhatsApp
Pinterest
ReddIt
Tumblr
Previous articleSix Flags St. Louis Drenches Guests on New Interactive Tsunami Soaker
Next articleVooDoo Zip Line at Rio Las Vegas Drops Riders 30 Stories at More than 30 MPH