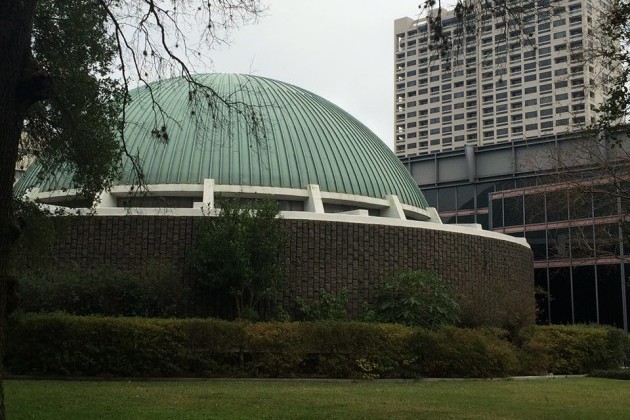 Salt Lake City, UT, USA (January 26, 2016) — The Houston Museum of Natural Science‘s Burke Baker Planetarium is set to become the world’s first True8K™ Planetarium on March 11, This groundbreaking Digistar 5 planetarium system from Evans and Sutherland (E&S) delivers the highest resolution hemispherical image on Earth, approaching the limit of what the human eye can resolve, displaying fulldome starfields and movies with over 50 million unique pixels. A typical digital movie screen is only 2 million pixels.

Kirk Johnson, Vice President and General Manager of E&S said, “This is a truly spectacular digital planetarium system. Since we first envisioned True8K™, we couldn’t wait to see it become a reality. Combined with Sony’s new laser projector, the new Digistar 5 planetarium in Houston will be nothing short of breathtaking.”

Digistar 5, the world’s premiere digital planetarium system, uses 20 state-of-the-art graphics processing computers to feed ten 4K projectors with the equivalent of 40 HD streams at 60 frames per second or faster. E&S has developed proprietary auto alignment and auto blending technology to combine images from the ten projectors into one seamless scene across the entire dome with no visible blends.

The Digistar projected image will have a contrast ratio of up to 20,000:1. According to Dr. Carolyn Sumners, the Museum’s Vice President for Astronomy, “The system can produce a night sky as dark, clear and crisp as the skies of West Texas, the Rockies, or the African savannah, giving Houstonians the rich night sky experience that has been lost to city dwellers.”

Museum President Joel Bartsch summarized the larger context of this achievement, “The Houston Museum of Natural Science strives to offer world-class experiences in its exhibits and theaters. With the world’s first True8K™ planetarium, our starfield is now an immersive exhibit that more closely and dramatically replicates reality than any other system currently known. Our full-dome experience now has the brightness, resolution, and vividness of the best theater screens, surrounding the audience in every direction. The Burke Baker Planetarium and its Friedkin Theater, the cornerstone of our institution when we opened in 1964, is now a crowning jewel in our 21st century museum.”

Digistar 5 is a powerful and easy-to-use digital planetarium projection system featuring a Cloud based library of shared content, intuitive show creation tools, NASA’s 3D universe with planets, stars, galaxies, asteroids, comets, and a host of spacecraft, a library of fulldome shows, and a worldwide community of users. With Digistar, planetarium astronomers can immerse audiences in live adventures, exploring the latest astronomical discoveries within hours of their release.

Dr. Sumners added, “The planetarium began with giant opto-mechanical machines that replicated the starry night far from city lights, but kept audiences firmly on Earth. The dream of the 21st century planetarium is to recreate once again this dark night sky and be able to travel through time and space to anywhere our data can take us – a neighboring planet, a nearby star cluster, a stellar birth cloud, a dying star, a distant galaxy, even back to the Big Bang when our universe began — with every moving image as sharp and vivid as the human eye can perceive. With the world’s first True8K™ Digistar system, at last the Burke Baker Planetarium delivers the experience that today’s moviegoers expect and that every urban child deserves.”

Teresa Phillips, Manager of Elementary Science for the Houston Independent School District, said, “We are very excited about the renovations taking place in the Burke Baker Planetarium. For generations, fourth grade students from HISD have been able to experience the dark night sky and observe different objects in the sky in the planetarium. The incredible digital clarity of the new Digistar 5 system will allow our students to clearly visualize abstract concepts such as the phases of the moon and the rotation of the Earth through this immersive experience. We appreciate the ongoing collaboration between our two organizations and know that the renovated planetarium will provide an experience that our fourth graders will not soon forget.”

The renovated Burke Baker Planetarium will be a dramatic improvement:

At least 5x the current brightness

Twice the current frame rate (with 120 frames per second possible)

A True8K™ planetarium must display all of the unique pixels in a dome master at least 8,000 pixels in diameter. This is over 50 million unique pixels (50,602,000 in the Houston planetarium). Existing “8K” planetariums display about 30 million pixels, only 60% of what is required to be a True8K™ theater.

Joe Kleimanhttp://wwww.themedreality.com
Raised in San Diego on theme parks, zoos, and IMAX films, InPark's Senior Correspondent Joe Kleiman would expand his childhood loves into two decades as a projectionist and theater director within the giant screen industry. In addition to his work in commercial and museum operations, Joe has volunteered his time to animal husbandry at leading facilities in California and Texas and has played a leading management role for a number of performing arts companies. Joe previously served as News Editor and has remained a contributing author to InPark Magazine since 2011. HIs writing has also appeared in Sound & Communications, LF Examiner, Jim Hill Media, The Planetarian, Behind the Thrills, and MiceChat His blog, ThemedReality.com takes an unconventional look at the attractions industry. Follow on twitter @ThemesRenewed Joe lives in Sacramento, California with his wife, dog, and a ghost.
Share
Facebook
Twitter
Linkedin
Email
Print
WhatsApp
Pinterest
ReddIt
Tumblr
Previous articleAtlantis Developers Close to Finalizing Land Deal for $2 Billion Hawai’i Resort
Next articlePortAventura Rebrands with New Website in Anticipation of Ferrari Land