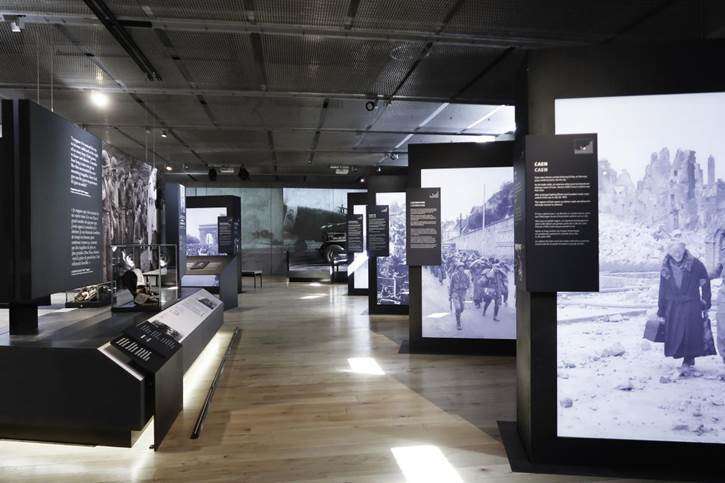 Thursday June 6 marked the 75 anniversary of the D-Day landings and the Normandy Campaign with special events being held by the American Battle Monuments Commission at the Normandy American Cemetery and Memorial, which now has a fully updated exhibition at its Visitor Center thanks to Leicester based Haley Sharpe Design (hsd).

The D-Day landings and Normandy Campaign were vital for the Allies gaining a foothold on mainland Europe during World War II. The Normandy American Cemetery and Memorial is the final resting place for over 9,000 soldiers who lie buried at the cemetery and over 1,500 names are inscribed on the Walls of the Missing, most of whom lost their lives during the landings and ensuing operations.

Claire Nunn, Interpretive Planner at hsd, commented, “Over recent years there has been a change in the demographics of visitors to the cemeteries and memorials. A growing number of visitors have less understanding of the reality of war and experiences of the soldiers.”

The American Battle Monuments Commission (ABMC) looks after the Normandy Memorial site in Colleville-sur-Mer (France). hsd was brought on board by Color-Ad Inc. to support the redesign of the exhibition spaces. They worked with the ABMC client and project team to evaluate the existing exhibits and interpretation to create a new experience that resonates with current and new audiences.

“The most important part of the redesign was finding creative and respectful ways of presenting the stories of those who are laid to rest so that visitors can better appreciate their contribution and role in the history of American military activity overseas,” continues Claire.

Following an evaluation of the previous interpretation and exhibits, a new interpretative framework now sets the D-Day landings into context within a chronology of events and with a particular focus on creating emotional connections to the storyline.

Personal stories and testimonies feature prominently with imagery and audio to provide audiences with a greater understanding and lasting impression of the significance of the landings and the enormous achievements and sacrifices of service members.

A mix of exhibit media has been used including large-scale graphics with impactful imagery and audio to develop atmosphere, compelling audio-visual components and sensitive tactile and digital interactive opportunities.

As well as being thought-provoking and engaging to national and international audiences the new exhibits are finished to an extremely high quality as befits this significant site and the requirements of sizeable visitor numbers. Usually, the visitor center receives over a million visitors, with two million visitors expected this year due to the 75th D-Day anniversary.

Paul Caygill, Designers at hsd, concluded, “It is a real honour to have worked on such an important project which explores the personal stories of those who served and those who suffered. We particularly wanted to focus on conveying the significance and reality of D-Day to younger visitors, to ensure that the sacrifices made here are never forgotten.”

Joe Kleimanhttp://wwww.themedreality.com
Raised in San Diego on theme parks, zoos, and IMAX films, InPark's Senior Correspondent Joe Kleiman would expand his childhood loves into two decades as a projectionist and theater director within the giant screen industry. In addition to his work in commercial and museum operations, Joe has volunteered his time to animal husbandry at leading facilities in California and Texas and has played a leading management role for a number of performing arts companies. Joe previously served as News Editor and has remained a contributing author to InPark Magazine since 2011. HIs writing has also appeared in Sound & Communications, LF Examiner, Jim Hill Media, The Planetarian, Behind the Thrills, and MiceChat His blog, ThemedReality.com takes an unconventional look at the attractions industry. Follow on twitter @ThemesRenewed Joe lives in Sacramento, California with his wife, dog, and a ghost.
Share
Facebook
Twitter
Linkedin
Email
Print
WhatsApp
Pinterest
ReddIt
Tumblr
Previous article
Warner Bros Studio Tour Hollywood adds original sets and costumes from The Big Bang Theory
Next article
SIGGRAPH selects sequence from Spitz’s “Birth of Planet Earth” for screening in Electronic Theater

Contextualizing EPCOT’s Guardians of the Galaxy