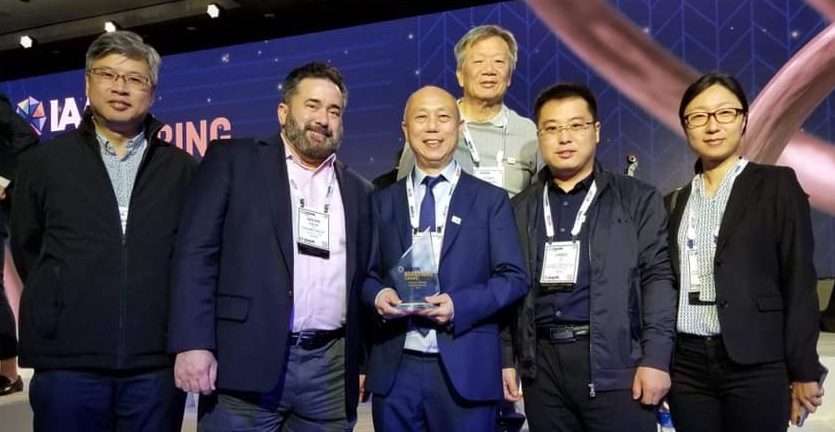 ABOVE: The team representing The Legend of Camel Bells with their IAAPA Brass Ring Award. Photo by Judith Rubin.

Shandong Huaxia Cultural Tourism group has been named for two prestigious, international honors: a TEA Thea Award for “The Legend of the Gods” and an IAAPA Brass Ring Award for “The Legend of Camel Bells” – both original, live theatrical multimedia shows operating on Huaxia theme park resort properties in China. Huaxia Cultural Tourism Group is also being recognized as a pioneer of environmental restoration in connection with one of the awards.

The two awards were announced in Orlando USA in November 2019 during the annual IAAPA Expo, the world’s foremost trade event for the global attractions industry. Both the awarded shows were produced by Huaxia Cultural Tourism Group as part of its “Legend” spectacle series, realizing the artistic and business vision of Huaxia Chairman Xia Chunting.

Chairman Xia said, “We’re extremely gratified to be honored with a TEA Thea Award and an IAAPA Brass Ring Award in the same year. TEA and IAAPA are well-established, prominent international organizations in the attractions industry; to receive this level of recognition from them validates the quality and success of our work and enables us to continue in our goal to share the Chinese culture with our own people and with others around the world. These globally recognized awards confer worldwide recognition and acclaim to Huaxia Cultural Tourism Group as a leader in the development, production and operation of major entertainment and cultural destinations.”

“THE LEGEND OF THE GODS” – TEA THEA AWARD

The Themed Entertainment Association (TEA) named “The Legend of the Gods” to receive a TEA Thea Award for Outstanding Achievement in the category of Live Show Spectacular.

“The Legend of the Gods” is a unique, one-hour, multimedia nighttime lagoon show, theatrically staged on a monumental scale, serving an audience of 2,100 at Huaxiacheng Tourism Scenic Area, Weihai Huaxia City in Shangdong, China. It was made possible by a pioneering, 16-year land restoration and redevelopment spanning thousands of acres that included moving 60 million cubic meters of dirt and planting more than 11 million trees in an area that had been devastated by mining.

A representative of Huaxia Cultural Tourism Group will attend the 26th annual TEA Thea Awards Gala (taking place in the US at Disneyland Resort in Anaheim, California) on April 18, 2020 to formally accept the trophy from TEA.

The International Association of Amusement Parks & Attractions (IAAPA) presented a Brass Ring Award trophy for Best Theatrical Production for “Legend of Camel Bells” at the official awards ceremony on November 19, 2019 in Orlando.

“The Legend of Camel Bells” is a permanent show at the Huaxia Cultural Tourism resort in Xi’an in scenic Huaxia City, a 6-billion-yuan enterprise already recognized with numerous leisure and tourism awards, including a TEA Thea Award in 2019. The show dramatizes a story of the Silk Road with epic scale and spectacle, blending state-of-the-art theater technology, live performance and animal actors, and monumental, animated sets and effects and surround sound. The 3,000-seat, purpose-built theater is designed with a revolving auditorium that delivers the audience to the sets that encircle it.

Joe Kleimanhttp://wwww.themedreality.com
Raised in San Diego on theme parks, zoos, and IMAX films, InPark's Senior Correspondent Joe Kleiman would expand his childhood loves into two decades as a projectionist and theater director within the giant screen industry. In addition to his work in commercial and museum operations, Joe has volunteered his time to animal husbandry at leading facilities in California and Texas and has played a leading management role for a number of performing arts companies. Joe previously served as News Editor and has remained a contributing author to InPark Magazine since 2011. HIs writing has also appeared in Sound & Communications, LF Examiner, Jim Hill Media, The Planetarian, Behind the Thrills, and MiceChat His blog, ThemedReality.com takes an unconventional look at the attractions industry. Follow on twitter @ThemesRenewed Joe lives in Sacramento, California with his wife, dog, and a ghost.
Share
Facebook
Twitter
Linkedin
Email
Print
WhatsApp
Pinterest
ReddIt
Tumblr
Previous articleGCVRS joins TEA, providing 360-degree sound design for immersive experiences
Next articleOriginal KidZania location upgraded as part of chain’s 20th anniversary celebration