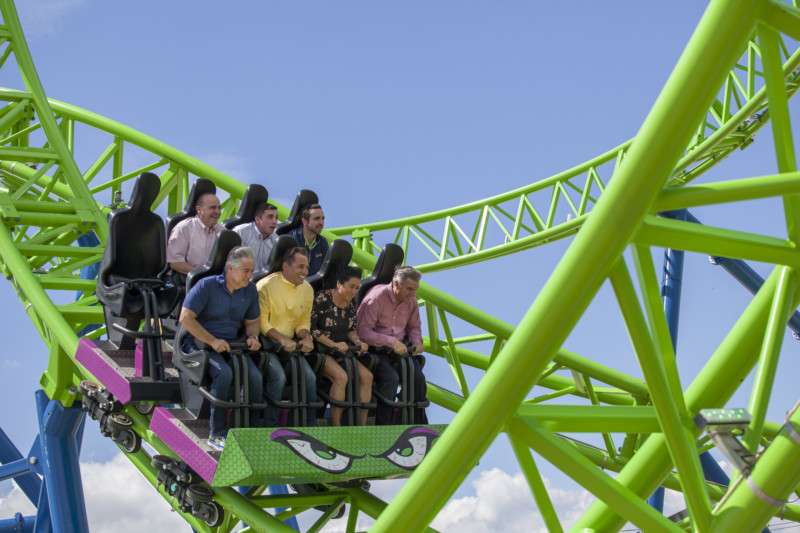 The Hydrus roller coaster opened at Casino Pier earlier this Summer. The ride, a Gerstlauer Euro-Fighter, was one of the centerpieces of a multi-million dollar rebuilding effort on the part of the family that owns the pier.

Maria Mastoris, Marketing Manager at Casino Pier, said, “Since Superstorm Sandy, our rebuilding plans were all geared towards fortifying the infrastructure to protect against any potential future loss. We [now] have a great roller coaster to replace the JetStar and a new Ferris wheel on our expanded pier that will bring a lot of excitement to the property and springboard us into more new and exciting things in the future.”

New Jersey Governor Chris Christie was on-hand during the opening ceremonies and celebrated the coaster as a symbol of the state’s recovery from the storm. He noted, “In the same way that the Jet Star was the iconic symbol of what happened here during superstorm Sandy, the Hydrus is now going to be forever the iconic symbol of the comeback of the Jersey Shore from Hurricane Sandy.”

The roller coaster, which features green track and blue columns, sports an exciting start with a chain lift that goes straight up into the sky. Once the ride crests the top of the hill the car heads towards the ground as it speeds down a 97-degree first drop. Riders then head through three inversions before the coaster returns to the station.

Siegfried Gerstlauer, Managing Director of Gerstlauer Amusement Rides, said, “We were extremely honored that Casino Pier chose Gerstlauer to provide their new coaster. Obviously with everything the park has been through the resilience of the owners is impressive. We think the project turned out fantastic and the vertical lift and beyond-vertical drop has created a new icon along the Jersey Shore.”

Since opening the ride has been prominently featured in national news coverage. Hydrus was featured in a segment on NBC News, listed as one of the 6 best new coasters on ABC News, and received significant regional coverage in The New York Times, USA Today, and the Washington Post, among others. Casino Pier was also recently chosen as the Top Jersey Shore Attraction in New Jersey Monthly magazine.

Adam Sandy, Chief Business Development Officer at Ride Entertainment, said that the experience was a great one for all involved. “We were fortunate to begin speaking with Casino Pier very early in the rebuilding process. Because the coaster was being built on a pier the park had some very specific requirements on size and weight distribution. We were thrilled with the resulting ride and working with Casino Pier was a great partnership, it was our second project with them in 24 months.” Ride Entertainment both sold the attraction for Gerstlauer and installed the coaster for Casino Pier.

Mastoris said that Gerstlauer was great to work with. “After looking at several different companies, it was decided that this coaster gave us everything we needed – thrills, excitement, a coaster that families can ride with a good rider height, good capacity, and fit in the footprint we had planned for it.  All we hear from is how much fun the coaster is, and how smooth and quiet it is! That makes everything from rebuilding from Superstorm Sandy to today feel worth it. When we finally opened Hydrus, it was a very big moment. We can now say we are fully back and can close the books on the ‘Superstorm era,’” she said.

Hydrus sports the newest Euro-Fighter vehicles, which Gerstlauer has been working on for some time. Siegfried Gerstlauer said, “This Euro-Fighter represents the culmination of evolution for this vehicle design. We have been improving it for several years and it offers a more comfortable and open rider experience.”

Bret Ulozas, a noted Seaside Heights amusements historian and the New Jersey representative for the American Coaster Enthusiasts (ACE), said, “From a historical perspective it is an iconic roller coaster for future generations. From the coaster enthusiast point of view, it is smooth and well-paced, everyone wants to ride it again and again.”

Casino Pier (https://casinopiernj.com) is open daily. Stop by and enjoy the thrills of Hydrus this summer in Seaside Heights, New Jersey.

Joe Kleimanhttp://wwww.themedreality.com
Raised in San Diego on theme parks, zoos, and IMAX films, InPark's Senior Correspondent Joe Kleiman would expand his childhood loves into two decades as a projectionist and theater director within the giant screen industry. In addition to his work in commercial and museum operations, Joe has volunteered his time to animal husbandry at leading facilities in California and Texas and has played a leading management role for a number of performing arts companies. Joe previously served as News Editor and has remained a contributing author to InPark Magazine since 2011. HIs writing has also appeared in Sound & Communications, LF Examiner, Jim Hill Media, The Planetarian, Behind the Thrills, and MiceChat His blog, ThemedReality.com takes an unconventional look at the attractions industry. Follow on twitter @ThemesRenewed Joe lives in Sacramento, California with his wife, dog, and a ghost.
Share
Facebook
Twitter
Linkedin
Email
Print
WhatsApp
Pinterest
ReddIt
Tumblr
Previous articleChristoph Kiessling to Keynote EAS Leadership Breakfast
Next articleADG Designed H2OBX Waterpark Opens on Carolina Outer Banks