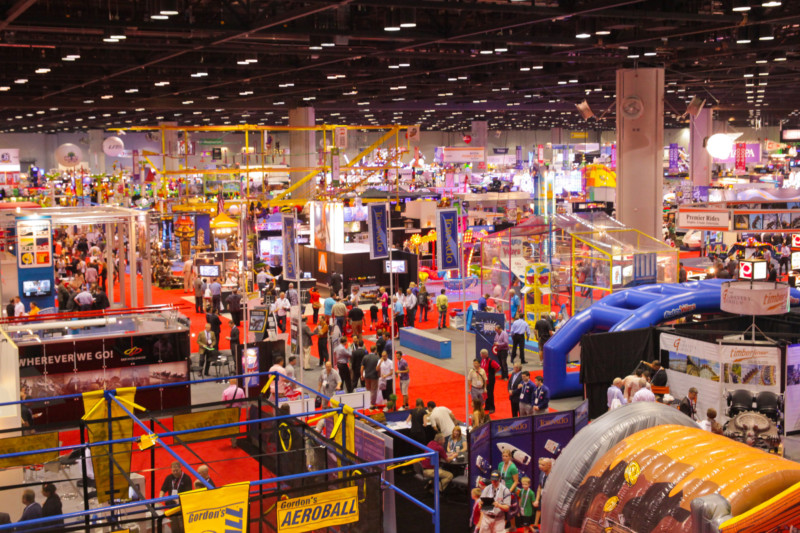 [quote]As home to seven of the top theme parks in the world plus many other attractions, Orlando is the perfect destination to host the largest international trade show for amusements and attractions.” — George Aguel, president and CEO of Visit Orlando[/quote]

Alexandria, VA, USA (May 27, 2014) – Officials from the International Association of Amusement Parks and Attractions (IAAPA), Visit Orlando, and the Orange County Convention Center (OCCC) today announced a six-year extension of their agreement to host IAAPA Attractions Expo in Orlando through 2025.

Approximately 28,800 people from more than 100 nations participated in IAAPA Attractions Expo 2013. The weeklong event is the largest conference and trade show for the worldwide attractions industry and it generates approximately $51.3 million for the Orlando-area economy. IAAPA officials also announced that registration for IAAPA Attractions Expo 2014, which takes place in the Orange County Convention CenterNov. 17-21, is now open.

The new contract represents an extension of IAAPA’s previous agreement to host the Expo in Orlando from 2010 through 2019.

“IAAPA Attractions Expo continues to grow year after year and that’s a testament to the power of Orlando as the ideal location for our global conference and trade show,” said IAAPA President and CEO Paul Noland. “The Orange County Convention Center is a best-in-class venue that’s well-suited for our event and our members love coming to Orlando to see what’s new in the industry and in the area’s world-renowned attractions.”

IAAPA officials cited a number of additional reasons for hosting the Expo in Orlando through 2025:

“We are so pleased that IAAPA has selected the Orange County Convention Center and Orlando as their home through 2025,” said Orange County Mayor Teresa Jacobs. “As the number-one tourist destination in the world, it makes great sense for Orlando to host the world’s top amusement park and attractions gathering.”

“Thanks to our world-class meeting facilities, recognized hospitality, and special relationship with IAPPA, we continue to enjoy growth in exhibitors and attendees,” said George Aguel, president and CEO of Visit Orlando.

“The Orange County Convention Center is honored to be chosen as a long-term partner for the prestigious IAAPA Attractions Expo,” said Kathie Canning, executive director of the Orange County Convention Center. “We have enjoyed an outstanding relationship with IAAPA and are excited to continue to provide their leadership, exhibitors, and attendees with all of the amenities that our convention center and community have to offer.”

The terms of the agreements between IAAPA and Orlando were not disclosed.

Joe Kleimanhttp://wwww.themedreality.com
Raised in San Diego on theme parks, zoos, and IMAX films, InPark's Senior Correspondent Joe Kleiman would expand his childhood loves into two decades as a projectionist and theater director within the giant screen industry. In addition to his work in commercial and museum operations, Joe has volunteered his time to animal husbandry at leading facilities in California and Texas and has played a leading management role for a number of performing arts companies. Joe previously served as News Editor and has remained a contributing author to InPark Magazine since 2011. HIs writing has also appeared in Sound & Communications, LF Examiner, Jim Hill Media, The Planetarian, Behind the Thrills, and MiceChat His blog, ThemedReality.com takes an unconventional look at the attractions industry. Follow on twitter @ThemesRenewed Joe lives in Sacramento, California with his wife, dog, and a ghost.
Share
Facebook
Twitter
Linkedin
Email
Print
WhatsApp
Pinterest
ReddIt
Tumblr
Previous articleAlcorn McBride Ups Standard Warranty to Five Years Coverage
Next articleEntertainment Design Corporation Promotes Alex Calle to CEO