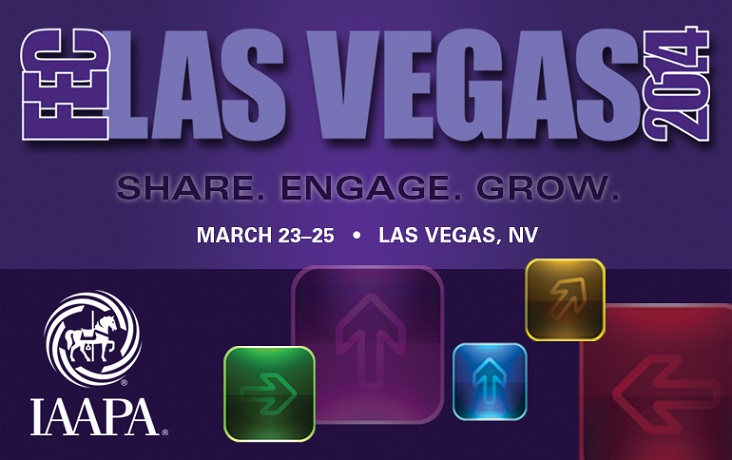 16 Companies Take Advantage of Early-Bird Sponsorship Opportunity
Sixteen companies that sponsored FEC Phoenix in 2013 were given an early-bird registration opportunity to sponsor the 2014 event. To take advantage of the offer, they had to commit by Nov. 11 so the remaining sponsorship opportunities could be made available to other members in time for IAAPA Attractions Expo 2013 in Orlando, Fla., Nov. 18-22. Here is a list of the 16 companies that have already committed to support FEC Las Vegas 2014:

Richard Long, national account sales manager for returning sponsor Benchmark Games said “[Last year] we had a chance to meet with key decision makers over two and a half days in a social networking environment, and the ‘no baloney’ information that was shared was extremely valuable. The format allowed operators and suppliers to come together and speak honestly without worrying about ‘what I am giving away’.”

Additional sponsorship opportunities, including two premium Platinum sponsorships, are still available for other IAAPA member companies on a first-come, first served basis. Interested parties should contact Brian Skepton at IAAPA ([email protected] or +1 703/299-5749). A complete list of sponsors is available at www.IAAPA.org/FECLasVegasSponsors and will be updated as new sponsors join the event.

“The AAMA and AMOA are excited to join Amusement Expo with IAAPA’s FEC Las Vegas for a valuable week of education and events in March 2014,” said AAMA Executive Vice President John Schultz and AMOA Executive Vice President Jack Kelleher, Amusement Expo co-organizers. “We are working together to provide a great experience for the FEC community and overall amusement industry. The energy and networking from these combined events will help jumpstart participants’ 2014.”

Scott is an author, educator, and 20-year veteran operator in the FEC industry. Having navigated multiple roles in the entertainment and services economy, including working at Swings-n-Things Family Fun Park near Cleveland, Ohio, he has a unique, hands-on perspective on the entrepreneurial side of business ownership and the day-to-day nuances of operational management. He currently operates Great Service Lives and provides a variety of leadership, coaching, and service-focused management training programs for businesses within the entertainment, recreation, and hospitality industries.

Matt has spent 24 years in the attractions industry. Starting as a ride operator at Canobie Lake Park just out of high school, Matt has enjoyed a robust career around the industry with leadership positions at Canobie, Knott’s Camp Snoopy, Valleyfair, and Smiles Entertainment Center, an FEC in Connecticut. In 2003 Matt joined Universal Orlando Resort as the senior trainer of leadership development. In 2011 he created Performance Optimist Consulting, and now helps leaders across the hospitality industry make sure they are getting the most out of themselves and their teams.

Scott and Matt will introduce 10-plus speakers at FEC Las Vegas and facilitate the rapid-fire discussions among participants. FEC Las Vegas will include two and a half days of educational programming, information exchange, and networking for FEC professionals.

About FEC Las Vegas 2014
FEC Las Vegas is a conference for FEC operators, by FEC operators, where the best and the brightest in the FEC industry gather to solve challenges, build a network, compare stats, and discuss proven strategies and tactics that will help participants take their businesses to the next level.

FEC Las Vegas 2014 is a must-attend event for owners and senior managers, who are looking for ways to build their businesses and increase revenue. With its theme “Share, Engage, and Grow,” conference attendees will learn from industry veterans, other participants, and suppliers who will share information on trends, hot topics, proven programs, and techniques for driving profitability. They will also benefit from the networking and the relationships they will build with other FEC Las Vegas participants.

FEC Las Vegas registration is only open to IAAPA facility members who are currently operating an FEC, as well as event sponsors. It includes two receptions, two dinners, two breakfasts, two lunches, and participation in all educational sessions and hands-on workshops. The registration fee is $339, discounted to only $289 up until Jan. 31.

The host hotel for FEC Las Vegas is the JW Marriott Resort & Spa, 221 N Rampart Blvd., Las Vegas, NV 89145. A special room rate of $135 per night (including resort fee and in-room Internet) is available if the room is booked before March 6, 2014. Additional information about FEC Las Vegas and a link for booking the hotel room at the special rate is available at www.IAAPA.org/FECLasVegas.

Joe Kleimanhttp://wwww.themedreality.com
Raised in San Diego on theme parks, zoos, and IMAX films, InPark's Senior Correspondent Joe Kleiman would expand his childhood loves into two decades as a projectionist and theater director within the giant screen industry. In addition to his work in commercial and museum operations, Joe has volunteered his time to animal husbandry at leading facilities in California and Texas and has played a leading management role for a number of performing arts companies. Joe previously served as News Editor and has remained a contributing author to InPark Magazine since 2011. HIs writing has also appeared in Sound & Communications, LF Examiner, Jim Hill Media, The Planetarian, Behind the Thrills, and MiceChat His blog, ThemedReality.com takes an unconventional look at the attractions industry. Follow on twitter @ThemesRenewed Joe lives in Sacramento, California with his wife, dog, and a ghost.
Share
Facebook
Twitter
Linkedin
Email
Print
WhatsApp
Pinterest
ReddIt
Tumblr
Previous article
Alan Caskey Named North America Business Development Manager at Holovis
Next article
MediaMation Awarded Patent for X4D Shared Drive Mechanism