The board of directors of the International Association of Amusement Parks and Attractions (IAAPA) elected Amanda Thompson OBE second vice chairman during its meeting on Sept. 25 in Berlin, Germany. Thompson is managing director (CEO) of Blackpool Pleasure Beach and will serve as IAAPA’s second vice chair in 2018. She will be first vice chair in 2019 and then lead the global attractions industry trade association as its chairman of the board in 2020.

“Amanda’s firsthand knowledge of leading a successful family owned business and her diverse industry experience make her the perfect person for this role,” said Mario Mamon, chairman of the IAAPA Governance Committee and president and CEO of Enchanted Kingdom in the Philippines. “She is a third-generation attractions industry leader and a long-time IAAPA volunteer. All of this, coupled with her passion for the industry make her the right leader at the right time for IAAPA.” 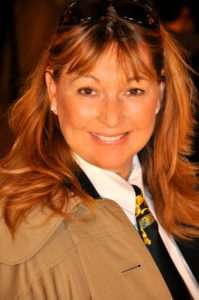 Thompson brings lifelong industry experience and knowledge to the IAAPA role that is as much generational as it is personal. Blackpool Pleasure Beach was established by Amanda’s great grandfather, WG Bean, in 1896. Her grandfather, Leonard Thompson, assumed leadership in 1931, and her father Geoffrey oversaw the business from 1976 until 2004. Since that time, Amanda has led the park as managing director (CEO).

Thompson’s election as IAAPA’s second vice chair marks the first time a second member of the same family has chaired the association. She is the first woman from Europe to chair the global trade association, and the third woman in IAAPA’s 100-year history to lead the organization.

Thompson has been part of Blackpool Pleasure Beach throughout her entire life. In 1982, she founded Stageworks Worldwide Productions, an entertainment company that produces shows around the world. Thompson is currently producer/director of “Hot Ice Show” and has previously directed “Eclipse,” “Mystique,” and “Forbidden.” Amanda has also been awarded the Michael Elliott Award for Director of the Year.

Thompson has been a dedicated and involved IAAPA member for decades. She has served two terms on the IAAPA Board of Directors and currently chairs the IAAPA Europe, Middle East, and Africa (EMEA) Regional Advisory Committee. She has also served as a member of IAAPA’s executive finance, membership, and entertainment committees.

Thompson received the coveted Order of the British Empire (OBE) honor for her services to tourism in 2012. She has produced content for 15 variety shows for Her Majesty the Queen of England and is a Patron of Blackpool’s world-famous Grand Theatre, the National Theatre of Variety, and a Patron of the Blackpool Civic Trust.

“Thanks to my grandfather, Blackpool Pleasure Beach became the first IAAPA member outside the United States when he joined the association in 1935. My father, Geoffrey Thompson was the chairman of the IAAPA board in 1996,” said Thompson. “Today, I’m excited for this opportunity to give back to this industry I love. It’s been a part of our family and our family business for many decades. I want to ensure that IAAPA is the global association of our industry and that we support and serve our members in all regions. Our industry employs more than 2 million globally, so it is a key industry, and a great industry to work in. I hope to serve as a role model for the increasing number of young women leaders in the attractions industry.”

Joe Kleimanhttp://wwww.themedreality.com
Raised in San Diego on theme parks, zoos, and IMAX films, InPark's Senior Correspondent Joe Kleiman would expand his childhood loves into two decades as a projectionist and theater director within the giant screen industry. In addition to his work in commercial and museum operations, Joe has volunteered his time to animal husbandry at leading facilities in California and Texas and has played a leading management role for a number of performing arts companies. Joe previously served as News Editor and has remained a contributing author to InPark Magazine since 2011. HIs writing has also appeared in Sound & Communications, LF Examiner, Jim Hill Media, The Planetarian, Behind the Thrills, and MiceChat His blog, ThemedReality.com takes an unconventional look at the attractions industry. Follow on twitter @ThemesRenewed Joe lives in Sacramento, California with his wife, dog, and a ghost.
Share
Facebook
Twitter
Linkedin
Email
Print
WhatsApp
Pinterest
ReddIt
Tumblr
Previous articleAquatica Orlando Introduces 3-in-1 Ray Rush Family Raft Slide in 2018
Next articleTech Museum of Innovation Develops AR Program for Newest Body Worlds Exhibit