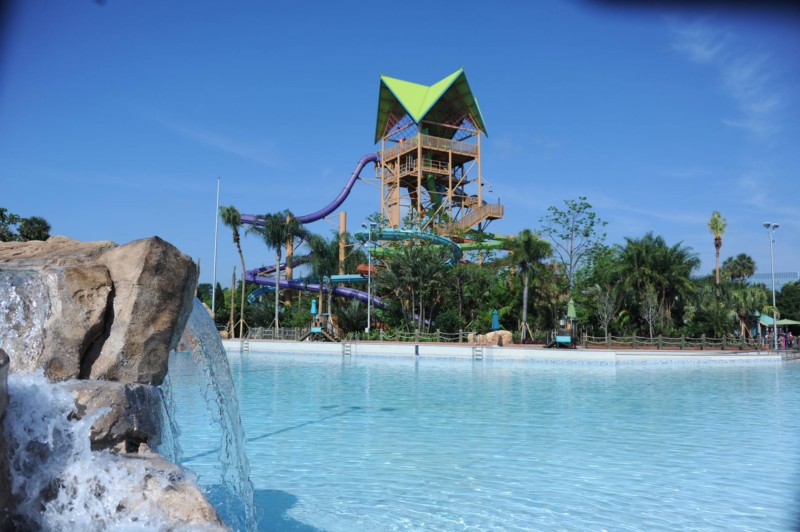 [quote]From the daring height, crazy drops, and intense speed, this thrilling new attraction brings a whole new level of excitement to an already amazing park that has so much for every age.” — Bryan Nadeau, Aquatica Orlando vice president[/quote]

Orlando, FL, USA (May 9, 2014) – Ihu’s Breakaway Falls – the tallest, steepest and only multi-drop tower slide of its kind in Orlando – officially opens at Aquatica, SeaWorld’s Waterpark.

Riders climb 126 steps to the top of the eight-story tower (nearly 80 feet), stepping into one of three colorful breakaway boxes. As the door closes, riders cross their arms and give a thumbs up in preparation for their drop — they’ll never know when the floor beneath them will disappear. Facing each other, riders watch as their fellow riders fall.  Adding to the anticipation is the sound of a heartbeat, which can be heard in the background while bracing for the drop.  Once the floor disappears, riders drop 20-24 feet per second launching them into a spiraling speed slide culminating in a final splashdown.

Riders who are not quite brave enough for the breakaway boxes can try the open slide. But don’t be fooled, this is not an ordinary slide; it’s the steepest of the four slides and many riders are calling it the most intense.

–Ihu’s Breakaway Falls features the tallest, steepest, and only multi-drop tower slide of its kind in Orlando.

–Those who dare to brave Ihu’s Breakaway Falls will experience an almost vertical drop for nearly 40 feet, the steepest slide of its kind in Orlando.

–Drop more than three stories and slide for 420 feet, the longest of the four slides, on the orange slide.

–The green slide path has the shortest drop, but it’s still a 28-foot fall – that’s the same as four seven-foot tall basketball players.

–Fall from the blue slide if you’re looking for the steepest slide with a breakaway box.

–While the purple slide isn’t a true drop slide, it is by no means a “chicken slide”. In fact, this open-aired slide is the steepest of all four slides.

–Once the floor disappears, riders will drop 20-24 feet per second.

–Ihu’s Breakaway Falls is the only high-speed water thrill slide in the world with three breakaway boxes that face each other so riders can share the full experience.

Joe Kleimanhttp://wwww.themedreality.com
Raised in San Diego on theme parks, zoos, and IMAX films, Joe Kleiman would expand his childhood loves into two decades as a projectionist and theater director within the giant screen industry. In addition to his work in commercial and museum operations, Joe has volunteered his time to animal husbandry at leading facilities in California and Texas and has played a leading management role for a number of performing arts companies. Joe has been News Editor and contributing author to InPark Magazine since 2011. HIs writing has also appeared in Sound & Communications, LF Examiner, Jim Hill Media, and MiceChat. His blog, ThemedReality.com takes an unconventional look at the attractions industry. Follow on twitter @ThemesRenewed Joe lives in Sacramento, California with his fiancé, two dogs, and a ghost.
Share
Facebook
Twitter
Linkedin
Email
Print
WhatsApp
Pinterest
ReddIt
Tumblr
Previous articleChance Rides’ First SkyQuest Provides Unprecedented Aerial Viewing at Indianapolis Zoo
Next articleMuseum at Prairiefire Brings American Museum of Natural History Exhibits to the Heartland