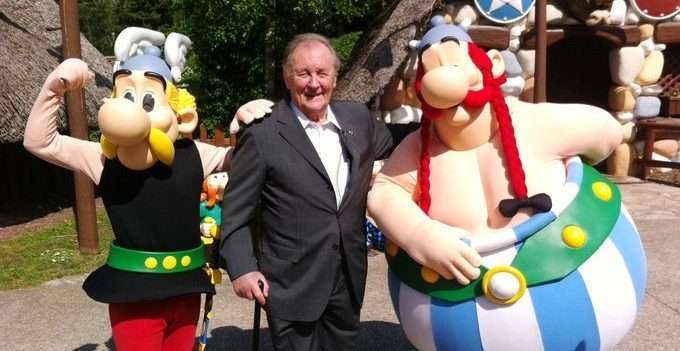 Albert Uderzo, co-creator of French comic Astérix, passed away on Tuesday, March 24, 2000 at his home in Neuilly. Born in Italy in 1927, Uderzo co-created the French comic Astérix in 1959 with screenwriter René Goscinny. In 1989, Parc Astérix, a theme park based on the historic Gallic world and characters created by Uderzo and Goscinny, opened in the French town of Plailly. Uderzo remained a consultant on the park’s development for many years.

On Uderzo’s passing, Dominique Parcel, Chairman and CEO of Parc Astérix owner Compagnie des Alpes remarked: “A tribute to this great man whose pencil, imagination and impertinence together made whole generations laugh. His work will remain universal because it is about sharing and creates social ties, key values all the more important in the situation we are going through”

“His heritage, we will always make it live through this Parc Astérix on which he has worked so much with us and also, without doubt, somewhere in each of our locations.”

Themed resort developer Sol Kerzner passed away on Wednesday, March 25 at his home in Cape Town, South Africa. Born in Johannesburg, South Africa, in 1935, Kerzner founded some of the world’s most iconic themed resorts. Commencing work in 1975, over the next ten years, Kerzner built the Sun City Resort outside Johannesburg, comprised of four hotels, a man-made lake, two Gary Player golf courses, and an entertainment center with an indoor 6,000-seat arena, which played host to a world-class roster of artists including Queen, Frank Sinatra, Liza Minelli, Shirley Bassey, as well as huge world title fights, and later a world-class waterpark.

In 1994, he acquired the bankrupt Paradise Island Resort in The Bahamas, expanding it and transforming it into the highly-themed Atlantis Resort, followed by billion dollar themed Atlantis resorts in Dubai, UAE and Sanya, China. Kerzner retired in 2014.

Neither death was COVID-19 related.

Joe Kleimanhttp://wwww.themedreality.com
Raised in San Diego on theme parks, zoos, and IMAX films, InPark's Senior Correspondent Joe Kleiman would expand his childhood loves into two decades as a projectionist and theater director within the giant screen industry. In addition to his work in commercial and museum operations, Joe has volunteered his time to animal husbandry at leading facilities in California and Texas and has played a leading management role for a number of performing arts companies. Joe previously served as News Editor and has remained a contributing author to InPark Magazine since 2011. HIs writing has also appeared in Sound & Communications, LF Examiner, Jim Hill Media, The Planetarian, Behind the Thrills, and MiceChat His blog, ThemedReality.com takes an unconventional look at the attractions industry. Follow on twitter @ThemesRenewed Joe lives in Sacramento, California with his wife, dog, and a ghost.
Share
Facebook
Twitter
Linkedin
Email
Print
WhatsApp
Pinterest
ReddIt
Tumblr
Previous articleScience Museum of Minnesota lays off more than 400 during extended closure, shifts to online-only programming
Next articleMuseums have protective gear to donate