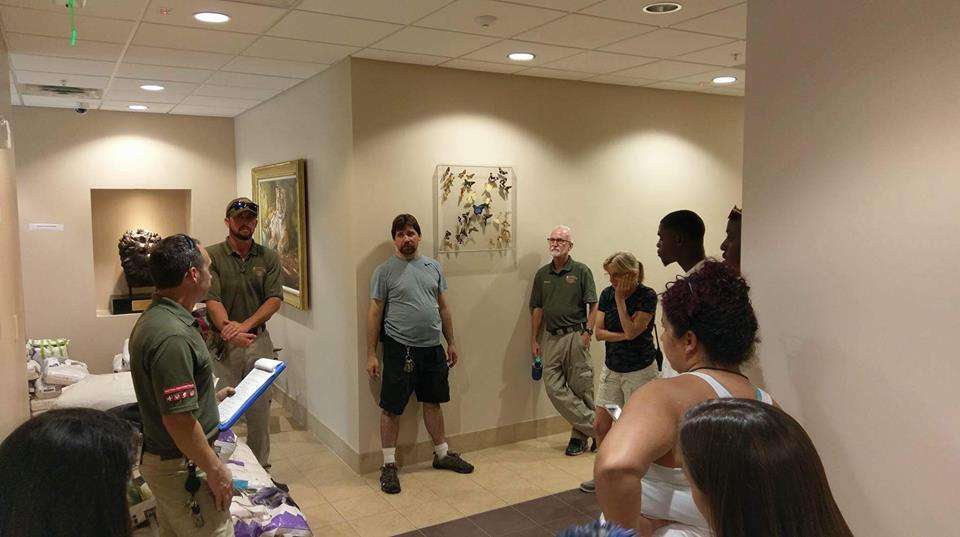 This is our final Hurricane Irma update. As of 10:30 pm EST, Irma is categorized as a tropical storm with maximum sustained winds of 45 mph, moving NNW at 16 mph. The eye is currently nearing Columbus, Georgia.

During Irma’s time in Florida, we monitored the status of a number of key animal attractions throughout the state:

Brevard Zoo on the Space Coast

Dolphin Research Center, Dolphins Plus, and Theater of the Sea in the Florida Keys

All facilities reported that animals made it through the storm with no injuries, with the exception of Palm Beach Zoo, which reported the deaths of three animals – a tree frog and a bird due to storm-related stress and an otter from a geriatric heart condition. Almost all animal attractions confirmed having staff ride-out teams on premises (a requirement for AZA member institutions) during the duration of the storm. The amount of facility damage varied and a number of attractions instituted internet funding campaigns to help with repair costs. An upcoming InPark feature will include ways to donate to help the attractions industry and its employees impacted by Hurricanes Harvey, Irma, and Jose.

The Florida Keys are currently closed to any incoming traffic. 10,000 residents who remained in the Keys during the storm may be evacuated over the coming days by the military.

Amtrak has canceled all rail to and from Georgia and Florida, including Auto Train, indefinitely.

Attractions in the Florida Keys, including Key West, will remain closed indefinitely while the islands remain closed to public access and a mass evacuation is at hand.

In Miami, Monkey Jungle, the Miami Seaquarium, Jungle Island, Zoo Miami, and Frost Science will all remain closed while facilities are assessed and damage addressed.

In Palm Beach County,  Palm Beach Zoo will be closed indefinitely to assess facilities and address damage. Lion Country Safari will conduct a thorough check of the facility on Tuesday.

Ringling Museum in Sarasota is assessing its situation and will remain closed until further notice.

IAAPA’s global headquarters in Orlando is scheduled to reopen on Tuesday.

LEGOLAND Florida Resort is assessing damage and as of 3:45 pm EDT today remained without power. The Resort’s parks will remain closed until further notice.

SeaWorld Orlando, Aquatica, and Discovery Cove will reopen on Wednesday.

Joe Kleimanhttp://wwww.themedreality.com
Raised in San Diego on theme parks, zoos, and IMAX films, InPark's Senior Correspondent Joe Kleiman would expand his childhood loves into two decades as a projectionist and theater director within the giant screen industry. In addition to his work in commercial and museum operations, Joe has volunteered his time to animal husbandry at leading facilities in California and Texas and has played a leading management role for a number of performing arts companies. Joe previously served as News Editor and has remained a contributing author to InPark Magazine since 2011. HIs writing has also appeared in Sound & Communications, LF Examiner, Jim Hill Media, The Planetarian, Behind the Thrills, and MiceChat His blog, ThemedReality.com takes an unconventional look at the attractions industry. Follow on twitter @ThemesRenewed Joe lives in Sacramento, California with his wife, dog, and a ghost.
Share
Facebook
Twitter
Linkedin
Email
Print
WhatsApp
Pinterest
ReddIt
Tumblr
Previous articleIrma Update 9/10 6:00 pm EDT
Next articleExpo 2017 Astana Draws to a Close After Hosting 50,000 Visitors Per Day