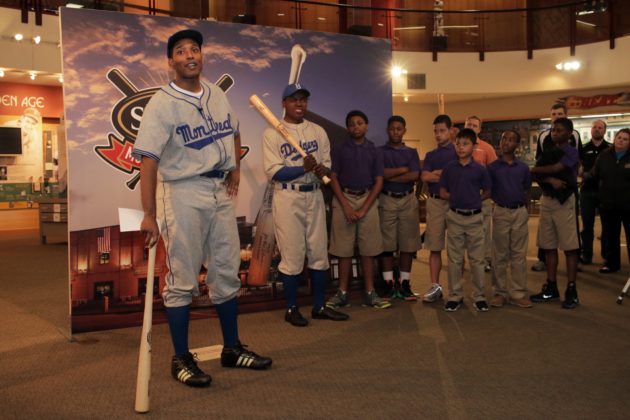 Louisville, KY, USA (May 12, 2016) — As the first African-American major leaguer in the 20th century, Jackie Robinson broke the color barrier in the big leagues. Over the course of his Hall-of-Fame career, Robinson faced down racism and inspired millions of people. After retiring from baseball he was dedicated to the advancement of civil rights and remained active and vocal on the issue until his death in 1972 at the age of 53.

“Jackie Robinson was the overwhelming choice of our guests for our next player sculpture,” said Anne Jewell, VP and Executive Director at the Louisville Slugger Museum & Factory. “His influence still resonates across generations, and there is still work to be done on the issues he confronted. We were thrilled when his wife, Rachel Robinson, gave her approval for this sculpture, and we’re honored to help keep his legacy alive.”

“Mrs. Robinson approved early renderings of the sculpture and even provided her husband’s shoe size so every inch of the piece would be as accurate as possible. “We are eagerly looking forward to the completion of the project,” said Mrs. Robinson

The unveiling today included the premiere of an original live portrayal of Jackie Robinson. The dramatic 5-minute piece is a collaboration with our Main Street neighbor, the Frazier History Museum, and will be performed several times a week for LSMF guests.

Joe Kleimanhttp://wwww.themedreality.com
Raised in San Diego on theme parks, zoos, and IMAX films, InPark's Senior Correspondent Joe Kleiman would expand his childhood loves into two decades as a projectionist and theater director within the giant screen industry. In addition to his work in commercial and museum operations, Joe has volunteered his time to animal husbandry at leading facilities in California and Texas and has played a leading management role for a number of performing arts companies. Joe previously served as News Editor and has remained a contributing author to InPark Magazine since 2011. HIs writing has also appeared in Sound & Communications, LF Examiner, Jim Hill Media, The Planetarian, Behind the Thrills, and MiceChat His blog, ThemedReality.com takes an unconventional look at the attractions industry. Follow on twitter @ThemesRenewed Joe lives in Sacramento, California with his wife, dog, and a ghost.
Share
Facebook
Twitter
Linkedin
Email
Print
WhatsApp
Pinterest
ReddIt
Tumblr
Previous article
MAD Systems Acquires LehmanAVC and Opens Orlando Office
Next article
Brazil’s Beach Park Resort Proves to be a ProSlide Success Story