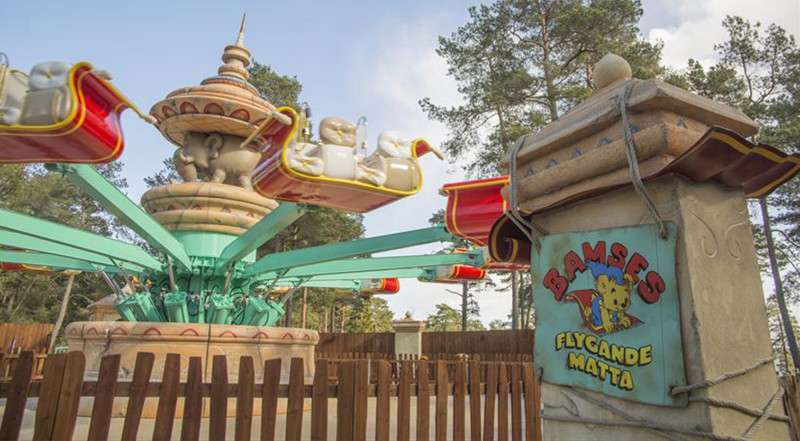 2015 saw the opening of Bamses Värld, or The World of Bamse, based on Sweden’s most beloved bear. Deep in a Swedish forest — both in the fictional Bamse universe and in real life — lies a friendly, woodsy community of characters, where rich décor, attractions, shops and restaurants make for a real-life comic book experience. As Bamse’s stories are numerous and nationally familiar, designers were able to tie in almost every element with a comic, cartoon episode or character. From a roller coaster modeled after a candy train in the recent motion picture “Bamse and Thief City” to a candy store taken straight from the comics, almost nothing in the land was left without a nod or reference. Kolmården Wildlife Park saw a 40% visitor increase after the opening of Bamses Värld. The following year, Jora Vision added Skalmans Luftballonger (“Skalman’s Hot Air Balloons”).

The latest addition to Bamses Värld, Bamses Flygande Matta, takes guests away from the familiar surroundings of Bamse’s village and on an adventure in the Orient. Based on a well-known Bamse story, the ride is sure to resound with Swedish guests, who just like Bamse himself will get to soar high on a magic carpet. Each carpet accommodates two adults and two children, and features a “magic button” which allows riders to pilot for themselves. The ride, for which the hardware was provided by Zamperla, was set amongst whimsically-themed temple ruins. Jora Vision built a temple tower held up by a statue of an elephant, dressed the operator booth and queue and provided props and signage to fit the theme.

Jora Vision’s first project for Kolmården entailed the queue and loading station for the park’s Safari ride back in 2011. The ride aimed to surpass expectations by taking guests over the animals in an elevated Dopplemayr cable car system, rather than driving them past habitats as in many other wildlife parks. From this unique vantage point and with audio guidance, riders are treated to a leisurely tour to much of the 370-acre park. The queue and station building tell the story of an imaginary explorer who has traveled the globe to study animals and their living environments. His collection of treasures is on display here, guarded within the thick clay walls of this north African-style building.

“We hope to continue our great collaboration with Kolmården Wildlife Park”, tells Sjors van Roosmalen, Creative Director at Jora Vision and responsible for designing many upgrades within the park. “To transform an already beautiful park into a place where even more exciting stories are told is a great pleasure. Looking to the future I foresee even more exciting additions!”

Joe Kleimanhttp://wwww.themedreality.com
Raised in San Diego on theme parks, zoos, and IMAX films, InPark's Senior Correspondent Joe Kleiman would expand his childhood loves into two decades as a projectionist and theater director within the giant screen industry. In addition to his work in commercial and museum operations, Joe has volunteered his time to animal husbandry at leading facilities in California and Texas and has played a leading management role for a number of performing arts companies. Joe previously served as News Editor and has remained a contributing author to InPark Magazine since 2011. HIs writing has also appeared in Sound & Communications, LF Examiner, Jim Hill Media, The Planetarian, Behind the Thrills, and MiceChat His blog, ThemedReality.com takes an unconventional look at the attractions industry. Follow on twitter @ThemesRenewed Joe lives in Sacramento, California with his wife, dog, and a ghost.
Share
Facebook
Twitter
Linkedin
Email
Print
WhatsApp
Pinterest
ReddIt
Tumblr
Previous articleWhiteWater in Texas: Typhoon Texas Turns One and Epic Waters Nears Opening
Next articleMousetrappe Announces New Port Aventura Ferrari Land Attractions and New Staff