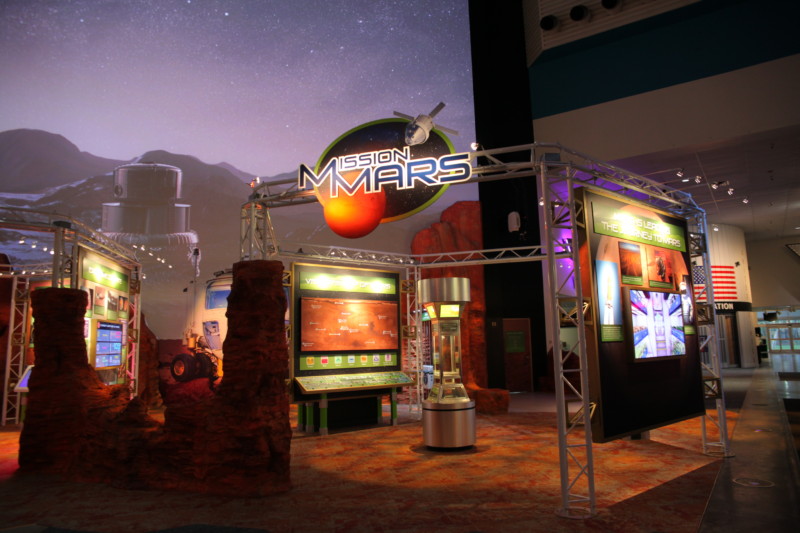 The new Mission Mars exhibit at Space Center Houston showcases an immersive experience about the red planet, offering an opportunity to peer inside an Orion spacecraft research model, stand close to a giant model rocket, and walk on a virtual Mars environment.

“This new major exhibit will inspire the next generation of explorers who could one day walk on Mars,” said William T. Harris, president and CEO of the science and space learning center. “Visitors will explore what it takes to travel to Mars, the hardware that will get us to the fourth planet in our solar system and how humans may live and conduct research on the red planet in future decades.”

Space Center Houston worked closely with NASA in the development of Mission Mars. A 4K technology video shows a virtual Mars landscape with rovers exploring the planet, a future rocket launching from Earth and heading for Mars and future astronauts landing. The exhibit puts visitors in the astronaut’s seat of an Orion simulator and allows them to record their own historic messages as they take their first steps on Mars. A collection of three rare Mars meteorites is on display inside the exhibit for a limited time, plus there is a special Mars rock visitors can touch. There are only 60,000 known meteorites on Earth, fewer than 150 are from Mars and most of those are held in private collections.

The future-looking exhibit takes visitors to a Mars landscape and features a look at how Mars and Martians have been illustrated in pop culture; the wealth of potential scientific discoveries to uncover on Mars; the innovation needed to build the most advanced spacecraft; and what returning to earth from deep space involves. Understanding the evolution and formation of Mars is the first step of the journey in the new exhibit. The physical terrain is explored through virtual landscapes provided from an orbiting satellite and surface rovers. The experience allows visitors to leave their footprints on three different types of Mars surfaces, study Olympus Mons, the largest volcano in the solar system, and seek evidence of water and water erosion as keys to finding evidence of possible life on Mars.

Visitors are able to peer inside a full-size Orion research model used by engineers from NASA Johnson Space Center and Lockheed Martin. The exhibit includes a magnificent 45-foot 1/8th scale model of the Space Launch System, which will be the most advanced and powerful deep space rocket ever produced. The SLS will use four RS-25 engines to help propel astronauts further into space than any rocket in history. Visitors can walk around one of these engines in the display. Touch-screen activities provide an opportunity to explore Mars, suit up an astronaut and pack for the long trip. Astronauts will face a unique set of challenges to sustain life and conduct experiments deep in the solar system. The exhibit shows how resources will be conserved and what techniques will be used to grow fresh food to sustain astronauts and reduce payload.

NASA’s Office of Education provided a grant through the Competitive Program for Museums, Science Centers, Planetariums and NASA Visitor Centers. These grants are designed to create interactive exhibits to engage the public, students and teachers in NASA-themed science, technology, engineering and mathematics. Lockheed Martin provided the Orion capsule research model, along with financial support for the exhibit construction. Space Center Houston is holding a jubilee celebration all year to honor its 25th anniversary on Oct. 16. The activities include the debut of several new exhibits, special events and a thought-leader speaker series.

Joe Kleimanhttp://wwww.themedreality.com
Raised in San Diego on theme parks, zoos, and IMAX films, InPark's Senior Correspondent Joe Kleiman would expand his childhood loves into two decades as a projectionist and theater director within the giant screen industry. In addition to his work in commercial and museum operations, Joe has volunteered his time to animal husbandry at leading facilities in California and Texas and has played a leading management role for a number of performing arts companies. Joe previously served as News Editor and has remained a contributing author to InPark Magazine since 2011. HIs writing has also appeared in Sound & Communications, LF Examiner, Jim Hill Media, The Planetarian, Behind the Thrills, and MiceChat His blog, ThemedReality.com takes an unconventional look at the attractions industry. Follow on twitter @ThemesRenewed Joe lives in Sacramento, California with his wife, dog, and a ghost.
Share
Facebook
Twitter
Linkedin
Email
Print
WhatsApp
Pinterest
ReddIt
Tumblr
Previous article
Six Flags Adds Mixed Reality Experience to Coasters at Two California Theme Parks
Next article
Disney’s Animal Kingdom to Premiere Rivers of Light Nighttime Spectacular on February 17