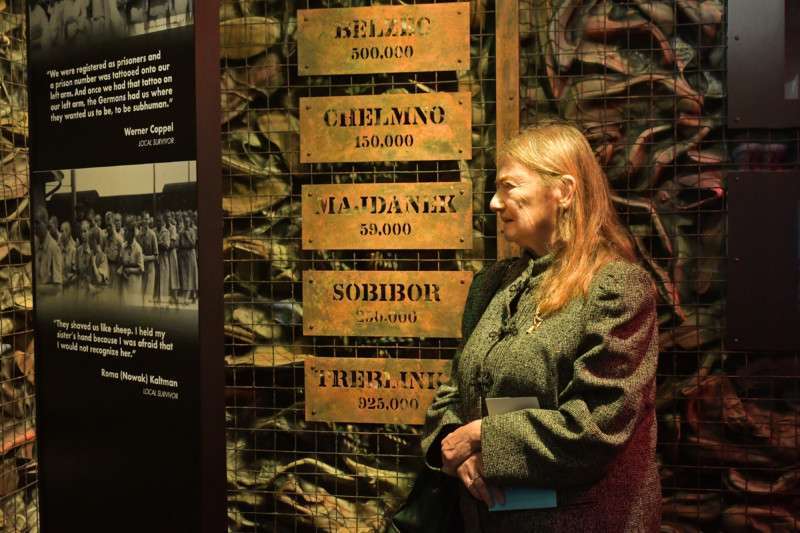 The Nancy & David Wolf Holocaust & Humanity Center (HHC) is now open to the public. The 7,500-square-foot cultural institution is the only Holocaust museum in the United States with a positive, authentic connection to its physical location – Union Terminal, where more than 1,000 survivors and refugees arrived by train to rebuild their lives in Cincinnati.

The exhibit design, concept, and project management of the museum represented a collective effort of the HHC staff, Berenbaum Jacobs Associates (BJA), and JRA. JRA previously worked with the HHC on their long-running permanent exhibit, “Mapping Our Tears,” while BJA collaborated with HHC and the National Underground Railroad Freedom Center on the special exhibition, “Unlocking the Gates of Auschwitz: 70 Years Later.”

The team of HHC, JRA, and BJA has created a museum that incorporates innovative storytelling, interactive experiences, personal narratives, original artwork, and genuine artifacts to chronicle the courage, strength, and triumph of local survivors during one of the darkest chapters of human history. The exhibits forge an emotional connection with local survivors by depicting their lives from the earliest days of Nazism through the devastation of the Holocaust, concluding with their eventual path to freedom. Throughout the Holocaust Gallery, the museum juxtaposes “bystanders,” those who witnessed injustice and did nothing, with “upstanders,” those who risked their lives to save the lives of others.

In addition to these historical exhibits, HHC houses the Humanity Gallery, which showcases local individuals who have made positive changes in their community and beyond. Visitors have the opportunity to explore what they can do to become modern upstanders, taking action at both a local and global level on topics that affect citizens everywhere.

With its focus on local survivor stories, as well as its emphasis on using the lessons of a tragic past to build a more compassionate future, the Nancy & David Wolf Holocaust & Humanity Center is unique among cultural institutions of its type.

Joe Kleimanhttp://wwww.themedreality.com
Raised in San Diego on theme parks, zoos, and IMAX films, InPark's Senior Correspondent Joe Kleiman would expand his childhood loves into two decades as a projectionist and theater director within the giant screen industry. In addition to his work in commercial and museum operations, Joe has volunteered his time to animal husbandry at leading facilities in California and Texas and has played a leading management role for a number of performing arts companies. Joe previously served as News Editor and has remained a contributing author to InPark Magazine since 2011. HIs writing has also appeared in Sound & Communications, LF Examiner, Jim Hill Media, The Planetarian, Behind the Thrills, and MiceChat His blog, ThemedReality.com takes an unconventional look at the attractions industry. Follow on twitter @ThemesRenewed Joe lives in Sacramento, California with his wife, dog, and a ghost.
Share
Facebook
Twitter
Linkedin
Email
Print
WhatsApp
Pinterest
ReddIt
Tumblr
Previous articleBarco introduces Medialon Showmaster version 2.7
Next articleIAAPA EMEA holds Winter Conference for first time in Canary Islands