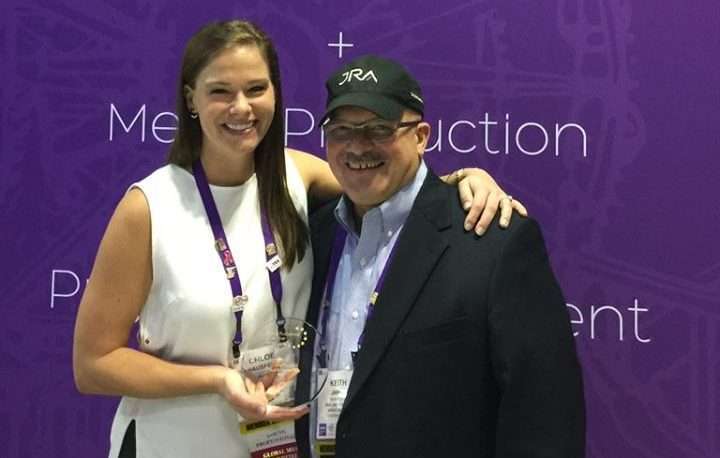 The International Association of Amusement Parks and Attractions (IAAPA) has just named Jack Rouse Associates (JRA) Director of Marketing and Business Development, Chloe Hausfeld (pictured above with her father, JRA CEO Keith James), its 2017 Young Professional of the Year. The recognition and accompanying award were given at the annual IAAPA Attractions Expo’s GM and Owners Breakfast by IAAPA Young Professionals Sub-Committee Chair, Will B. Morey, ICAE.

The IAAPA Young Professional of the Year Award honors members who demonstrate a dedication to the attractions industry through strong leadership, teamwork, and integrity, while continually developing their knowledge and experience. The Young Professional must also be a strong advocate of IAAPA’s mission to support, grow, and nurture the amusement park and attractions industry.

The IAAPA Young Professional of the Year recipient is determined by the association’s Membership Committee.  Hausfeld was selected from a strong list of candidates on account of her professionalism, leadership ability, and passion for the industry.  “In her short time in the industry, Chloe has made a name for herself by working tirelessly and dedicating herself to advancing the missions of JRA and IAAPA,” said Morey.  “She speaks candidly and is a motivating force to those around her.”

As Director, Marketing and Business Development, Chloe Hausfeld’s leadership efforts and relationship management abilities have greatly contributed to JRA’s penetration into the Asia-Pacific market, and she frequently attends high-level meetings with current and perspective clients from around the world. Within the office, Hausfeld is a chief strategist in the studio’s marketing and business development department, contributing to discussions as to which projects JRA should pursue. She also helps coordinate trade show logistics, business travel, and employee enrichment activities. Prior to JRA, Hausfeld received her Bachelors Degree in Special Education from the University of Cincinnati.

Upon entering the industry, Hausfeld immediately became involved in several IAAPA committees and initiatives, including the Young Professionals Committee and Manufacturers and Suppliers Committee. In addition, for the last two years, she has represented both IAAPA and the State of Ohio in IAAPA’s Advocacy Day activities, lobbying Ohio senators and representatives on the issues faced by the entertainment industry.

Most recently, Hausfeld joined IAAPA’s Give Kids the World (GKTW) Committee to help organize the various charity events hosted by IAAPA during Expo week. GKTW Village is an 84-acre, nonprofit “storybook” resort in Central Florida, where children with life-threatening illnesses and their families are treated to weeklong, cost-free vacations. Events include a motorcycle ride, a golf outing, and the Footsteps from the Heart 5K/1K through GKTW Village.

“I have had the very distinct pleasure of watching her grow up (literally) in our industry,” said Dan Schultz, JRA Chief Operating Officer.  “I know that I speak for all of us at JRA when I say that we are extremely proud and thrilled that Chloe has received this prestigious award. Her passion and dedication serve as a prime example of the new wave of talented professionals that will lead the charge as our industry continues to grow and prosper.”

“Just being nominated is humbling, but to actually be the recipient of the 2017 IAAPA Young Professional of the Year Award is beyond words,” said Hausfeld. “I’m unbelievably honored to receive the award, and I’m grateful to those who contributed to the nomination. To say that I am lucky to able to do what I do is an understatement, and I look forward to many more years in the ‘Industry of Fun’!”

Joe Kleimanhttp://wwww.themedreality.com
Raised in San Diego on theme parks, zoos, and IMAX films, InPark's Senior Correspondent Joe Kleiman would expand his childhood loves into two decades as a projectionist and theater director within the giant screen industry. In addition to his work in commercial and museum operations, Joe has volunteered his time to animal husbandry at leading facilities in California and Texas and has played a leading management role for a number of performing arts companies. Joe previously served as News Editor and has remained a contributing author to InPark Magazine since 2011. HIs writing has also appeared in Sound & Communications, LF Examiner, Jim Hill Media, The Planetarian, Behind the Thrills, and MiceChat His blog, ThemedReality.com takes an unconventional look at the attractions industry. Follow on twitter @ThemesRenewed Joe lives in Sacramento, California with his wife, dog, and a ghost.
Share
Facebook
Twitter
Linkedin
Email
Print
WhatsApp
Pinterest
ReddIt
Tumblr
Previous article
LEGOLAND California Resort Tops Off Second Themed Hotel
Next article
Gilroy Gardens expands nighttime events