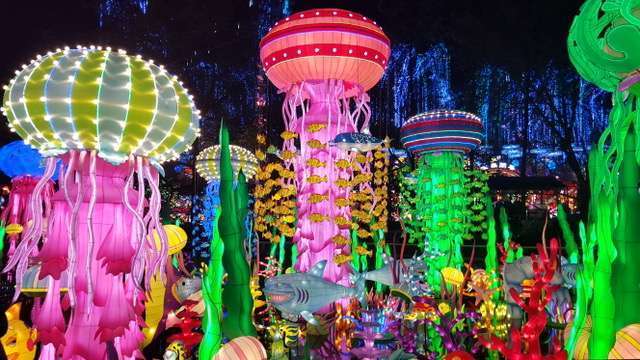 Jungle Island, South Florida’s popular eco-adventure attraction, reinvents an ancient Buddhist tradition with a Magic City twist through the debut of Luminosa! Festival of Lights. In partnership with Zigong Lantern Group and China Lantern International, which is the #1 industry leader in Chinese Lantern Festivals worldwide, the park will invite visitors from around the globe to marvel at a nighttime jungle filled with giant lanterns, hand-crafted out of colorful silk by Chinese artisans, from October 5, 2019 to January 8, 2020.

Luminosa will take guests on a journey through light across 13 of the park’s 18 acres. The journey tells the story of the jungle, which begins with an exploration of wildlife, birds, bloom and the beautiful Biscayne Bay. It then writes a chapter into the future through a story of transformation, rooted in adventure and infused with Miami’s new vibrant urban art identity.

“Luminosa! at Jungle Island is certain to be one of the most Instagrammable and talked about events of the season,” says Curtis Crider, Jungle Island’s new general manager. “Between the rich history behind the festival and its beautiful pageantry set within a jungle-like setting, this must-see installation will be a celebration of two cultures coming together and the rebirth of an iconic South Florida attraction.”

A few of the visuals will include oversized orchids and flowers, a demure cassowary and silk parrots in the Birds and Blooms exhibit; a sea of glowing jellyfish in the Biscayne Bay display; some of the world’s rarest animals down Jungle Trail; to 100-foot wide by 20-foot tall panoramic scenes of Miami’s most iconic destinations decked out in Chinese graffiti art in the Miami Style exhibit. All lanterns will be illuminated by environmentally-friendly LED lights and made out of water-proof and fire-resistant materials, reinforced by steel frames.

The Chinese Lantern Festival is believed to date back 2000 years ago to the Eastern Han Dynasty when Buddhist monks would light lanterns in the temples. Traditionally, the Lantern Festival marks the end of the Chinese New Year, also known as Spring Festival. The lanterns are thought to symbolize people letting go of their pasts and celebrating a new future, much like Jungle Island.

“Our joint effort with Jungle Island has influenced our design team to create something truly extraordinary,” adds Justin Corsa, executive director USA, China Lantern International. “Local Miami flair combined with eastern craftsmanship will result in one of our most creative and innovative exhibits to date.”

Joe Kleimanhttp://wwww.themedreality.com
Raised in San Diego on theme parks, zoos, and IMAX films, InPark's Senior Correspondent Joe Kleiman would expand his childhood loves into two decades as a projectionist and theater director within the giant screen industry. In addition to his work in commercial and museum operations, Joe has volunteered his time to animal husbandry at leading facilities in California and Texas and has played a leading management role for a number of performing arts companies. Joe previously served as News Editor and has remained a contributing author to InPark Magazine since 2011. HIs writing has also appeared in Sound & Communications, LF Examiner, Jim Hill Media, The Planetarian, Behind the Thrills, and MiceChat His blog, ThemedReality.com takes an unconventional look at the attractions industry. Follow on twitter @ThemesRenewed Joe lives in Sacramento, California with his wife, dog, and a ghost.
Share
Facebook
Twitter
Linkedin
Email
Print
WhatsApp
Pinterest
ReddIt
Tumblr
Previous articleAV Stumpfl establishes domestic sales & logistics facility for all AV Stumpfl products in the USA
Next articleIAAPA hosts press conference to showcase IAAPA Expo Asia 2019