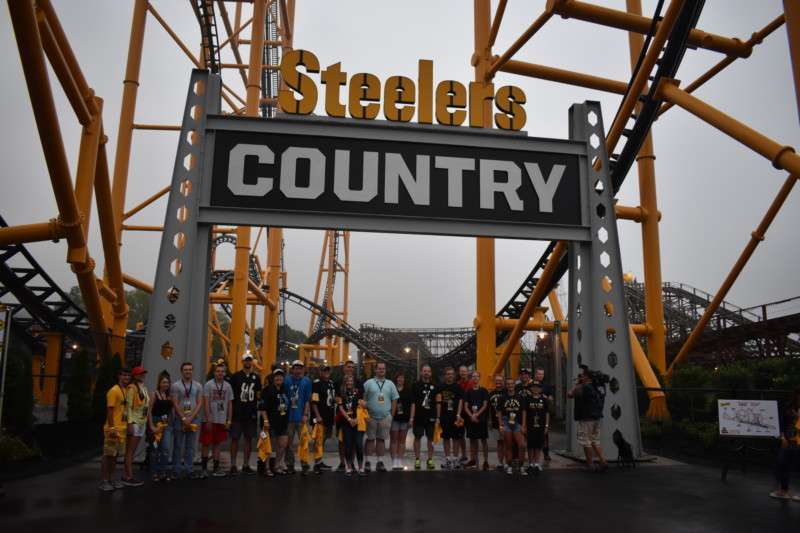 Football players, coaster enthusiasts and media gathered at Kennywood Park on Friday, July 12 for a sneak preview of one of America’s most anticipated roller coaster of 2019, The Steel Curtain, before its opening to the public on July 13.

The Steel Curtain sends its riders upside down more times than any other roller coaster in North America (9), including the world’s tallest inversion at 197 feet high. Winners of a national contest held in 2018 took the maiden voyage at 6:30 a.m. Friday, followed a few hours later by a group of Pittsburgh Steelers players past and present, including star defensive end Cam Heyward and Mike Wagner and John Banaszak, members of the 1970s Steelers defense that won four Super Bowls in a six-year span. Those ‘70s Steelers were led by a legendary line nicknamed The Steel Curtain, from which Kennywood’s newest record-setting roller coaster takes its name.

“It’s a lot of thrills, a lot of power, a lot of fun,” says Heyward. “If you’re looking for a good time, this is the gut punch you need!”

The Steel Curtain is the flagship attraction of the forthcoming Steelers Country at Kennywood themed land, including interactive games, retail and dining experiences designed to bring fans “onto the field” in a way never seen before. The remaining attractions of Steelers Country will open at a later date.

“This roller coaster changes the landscape of Kennywood completely and brings a whole new level of thrill to Southwestern Pennsylvania,” says Kennywood General Manager Jerome Gibas. “Bringing together two of the region’s most iconic institutions by partnering with the Steelers puts the extra point on this touchdown of a ride.”

Designed by S&S Worldwide, The Steel Curtain zooms across 4,000 feet of track, crossing over midways and even through Kennywood’s Lagoon, a central gathering place at the National Historic Landmark amusement park since its opening in 1898. Along with setting a world record for tallest inversion and North American record for most inversions, The Steel Curtain is Pennsylvania’s tallest roller coaster at 220 feet, hitting a top speed of 75 miles per hour and featuring a stunning 205-foot drop coming out of that record-setting inversion.

“S & S is very proud to partner with the fine folks at Kennywood and Palace Entertainment on this record-breaking, iconic coaster,” says S & S Worldwide President Tim Timco. “A great deal of time and effort has been put into the design, engineering and construction of this terrific ride that we are confident will be worth the wait. What a tremendous addition to this celebrated amusement park!”

For more on The Steel Curtain, please visit www.kennywood.com/steelerscountry

Joe Kleimanhttp://wwww.themedreality.com
Raised in San Diego on theme parks, zoos, and IMAX films, InPark's Senior Correspondent Joe Kleiman would expand his childhood loves into two decades as a projectionist and theater director within the giant screen industry. In addition to his work in commercial and museum operations, Joe has volunteered his time to animal husbandry at leading facilities in California and Texas and has played a leading management role for a number of performing arts companies. Joe previously served as News Editor and has remained a contributing author to InPark Magazine since 2011. HIs writing has also appeared in Sound & Communications, LF Examiner, Jim Hill Media, The Planetarian, Behind the Thrills, and MiceChat His blog, ThemedReality.com takes an unconventional look at the attractions industry. Follow on twitter @ThemesRenewed Joe lives in Sacramento, California with his wife, dog, and a ghost.
Share
Facebook
Twitter
Linkedin
Email
Print
WhatsApp
Pinterest
ReddIt
Tumblr
Previous articleQuebec welcomes two new Triotech attractions
Next articleTransformed Apollo/Saturn V Center and Moon Tree Garden open at KSC Visitor Complex celebrating 50th anniversary of lunar landing