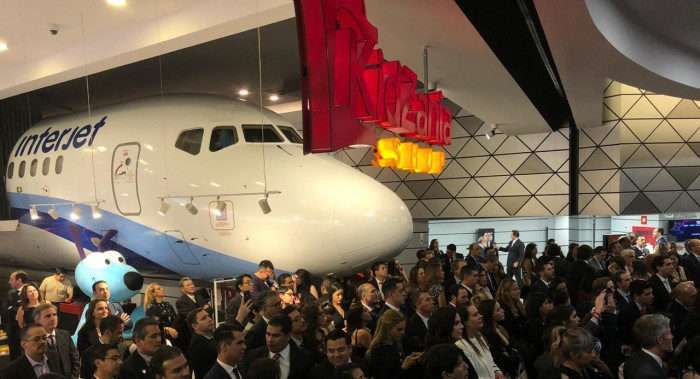 KidZania celebrated its first two decades of igniting the hearts and minds of children everywhere by empowering them to get ready for a better world with a moving ceremony, in which children were the stars. The gala took place in Santa Fe, a district of Mexico City.

Since KidZania is a place for and by kids, children had a very special role during the 20th Anniversary Gala that was hosted in KidZania Santa Fe, the first Metropolis of the Nation; formerly known as “La Ciudad de los Niños” (city of children). Kids participated as masters of ceremony throughout the entire ceremony, later a group of girls performed a choreography dancing to the rhythm of “We build this city”, a choir of kids performed the national anthems of Mexico and KidZania; and several children delivered the keys to the city to KidZania Board members, Industry Partners, and delegates from KidZania States for being in sync with KidZania’s Spirit and sharing the commitment of getting children ready to create a better world.

Irving Aguilar, age 9, declaimed a letter that emphasized on the strong commitment that children have to create a better future, a future where kids can be happy, exercise their rights, feel safe, protect the environment, and contribute in a positive way within their communities. By the end of the letter, he received a standing ovation applause, one of the highlights of the evening.

This gala also had a very important purpose, give a huge “ZanKs” to all KidZania’s constituencies for their contribution in creating what KidZania is today. As a token of gratitude, Xavier Lopez Ancona, president of KidZania, read a ZanKs letter recognizing the essential role that stakeholders like collaborators, franchisees, Industry Partners, Board members, educators, media, academia, family and friends for their support throughout KidZania’s first two decades of existence.

As a finale of the ceremony, a commemorative video showcased the most important milestones in KidZania’s history from 1999 to 2019.

Afterwards, all attendees enjoyed a cocktail party in the premises of the fully renovated KidZania Santa Fe.

As part of the 20th anniversary celebrations, KidZania Santa Fe, formerly known as “La Ciudad de los Niños” and the facility where the story of the Nation started back in 1999, reopened its doors after an extensive 10-month remodeling process to incorporate all the features included in the KidZania 4.0 model.

This facility combines the best of its traditional role-playing activities with new professions to help children get ready for the jobs of the future, which include a lot of STEM-related professions.

With its 4.0 model, KidZania aims to stay current and evolve into a concept that adapts to the needs of its visitors by offering them more and exciting experiences. Among the most relevant innovations encompassed in this model are:

New content options: New role-playing activities were developed, including animation and robotics in order to widen the range of professions represented at KidZania. Now, children can learn about aeronautics, programming, drones, internet of things, among many more surprises.

Interactive activities for parents: KidZania Santa Fe will have interactive points of sale, and a few role-playing activities where parents will be able to participate with their children.

Technological innovations: KidZania Santa Fe features the FourZ operative system which will ease every day’s operations, and also will have a new visitors app that will enhance their experience during their visit to KidZania.

As Xavier Lopez Ancona, president of KidZania mentioned: “We are celebrating 20 years of inspiring the hearts and minds of children in more than 25 countries to create a better world. A key part of this celebration is the remodeling and reopening of KidZania Santa Fe, the facility that saw our concept being born, and the Metropolis that will surely set the pace for the next two decades of the company.”

Joe Kleimanhttp://wwww.themedreality.com
Raised in San Diego on theme parks, zoos, and IMAX films, InPark's Senior Correspondent Joe Kleiman would expand his childhood loves into two decades as a projectionist and theater director within the giant screen industry. In addition to his work in commercial and museum operations, Joe has volunteered his time to animal husbandry at leading facilities in California and Texas and has played a leading management role for a number of performing arts companies. Joe previously served as News Editor and has remained a contributing author to InPark Magazine since 2011. HIs writing has also appeared in Sound & Communications, LF Examiner, Jim Hill Media, The Planetarian, Behind the Thrills, and MiceChat His blog, ThemedReality.com takes an unconventional look at the attractions industry. Follow on twitter @ThemesRenewed Joe lives in Sacramento, California with his wife, dog, and a ghost.
Share
Facebook
Twitter
Linkedin
Email
Print
WhatsApp
Pinterest
ReddIt
Tumblr
Previous articleHuaxia Cultural Tourism Group earns prestigious awards from leading attraction industry trade groups IAAPA and TEA
Next articlePalace Entertainment establishing support facility in Pittsburgh to be headed by COO John Reilly