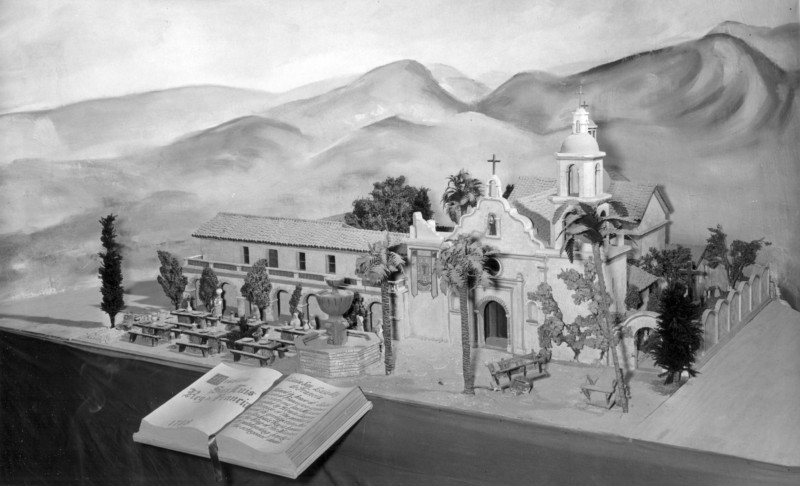 Knott’s Berry Farm has announced that starting on November 30, the beloved scale models of California’s historic Missions have returned to the park. This project reflects Knott’s continued appreciation and preservation of California’s rich history.

Scaled models of the original California Missions boarder the same midway between Silver Bullet and the south entrance of Fiesta Village, as it did previously for many years. Twenty-year veteran of Knott’s Berry Farm’s woodshop and current Knott’s craftsman, Bob Weir, has been meticulously restoring the missions for over three years, for a new generation of guests to appreciate.

“Knott’s Berry Farm prides itself in celebrating California’s rich, living history, and the California Mission models hold as much educational value as they do sentimental value for many of our guests,” said Knott’s general manager, Jon Storbeck. “We know that grade school curriculums in California include lessons on the California Missions, so we’re pleased that Knott’s Adventures in Education programs will allow students a unique and authentic learning experience that can only be found at Knott’s.”

In addition to the return of the historic missions, Knott’s is hosting its Early California History Day on March 15, 2017, in which students will have the opportunity to visit and tour the displayed models within the park, as well as have the opportunity to display a mission of their own. One homemade mission model will be selected to represent an individual school and enter into the California Missions competition. The winning models will be awarded special Knott’s Berry Farm prizes.

In the 1950’s as Knott’s Berry Farm grew in popularity, Walter Knott needed a way to keep park guests off of the stagecoach trail between the train depot and the northern end of the park for safety reasons. In keeping with the spirit of Knott’s – attractions both entertain and educate – Walter commissioned Leon Bayard de Volo to create scale models of all 21 California Missions. The missions were displayed in lit cases along the midway running between the Calico Railroad and what is now the south entrance to Fiesta Village.

The area was named El Camino Real (“The King’s Highway”), in honor of the actual California highway that connects all 21 missions. On the North and South ends of El Camino Real stood two full-size double-arch “ruins,” which were built and installed at Knott’s in 1955 and 1956, respectively. Today, the double-arch ruin that originally marked the entrance to Mission row near the train station can be found near the Ghost Town General Store and the Indian Trails Stage. The northern most double-arch is still standing in its original location, behind Wave Swinger in Fiesta Village.

The park will install all 21 mission models within the coming months.

Joe Kleimanhttp://wwww.themedreality.com
Raised in San Diego on theme parks, zoos, and IMAX films, InPark's Senior Correspondent Joe Kleiman would expand his childhood loves into two decades as a projectionist and theater director within the giant screen industry. In addition to his work in commercial and museum operations, Joe has volunteered his time to animal husbandry at leading facilities in California and Texas and has played a leading management role for a number of performing arts companies. Joe previously served as News Editor and has remained a contributing author to InPark Magazine since 2011. HIs writing has also appeared in Sound & Communications, LF Examiner, Jim Hill Media, The Planetarian, Behind the Thrills, and MiceChat His blog, ThemedReality.com takes an unconventional look at the attractions industry. Follow on twitter @ThemesRenewed Joe lives in Sacramento, California with his wife, dog, and a ghost.
Share
Facebook
Twitter
Linkedin
Email
Print
WhatsApp
Pinterest
ReddIt
Tumblr
Previous articleStefan Guttensohn Joins Nolan Heimann LLP’s Corporate & Securities Practice
Next articleDesign Collective and Plano-Coudon Partner with National Aquarium on New Animal Care and Rescue Center