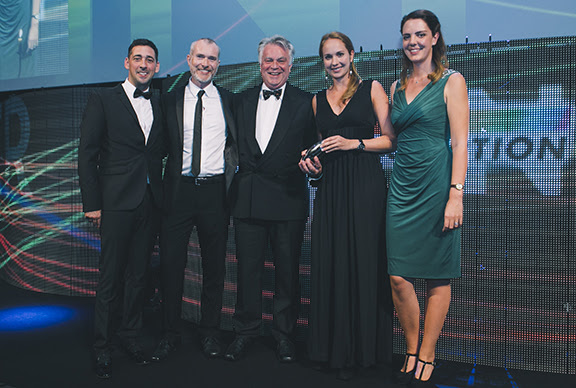 London, UK and Wels, Austria — Kraftwerk Living Technologies, international specialist in the field of audio-visual system integration headquartered in Wels, was honored with an AV Award in the category “Entertainment Venue of the Year” at the AV Awards ceremony held in London in late September. The record-breaking and award-winning project currently holding two Guinness World Records is the world’s largest 4D Theater and was designed and realized by the experts from Kraftwerk. The flagship attraction of the Chinese theme park Chimelong Ocean Kingdom in Zhuhai was opened in June of 2015 and seats a total of 1000 people – allowing for an hourly throughput of almost 3000 people.

Nominated in the “Best Entertainment Venue of the Year” category, the 5D Castle Theater at Chimelong Ocean Kingdom was up against tough competition. Kraftwerk Living Technologies was announced the winner in front of over 1200 attendees.

“We aimed at creating a visitor attraction that surpasses any existing experience by not only its size, but also its quality, following the credo: Go big and be unforgettable,” says Christian Hofer, Managing Partner and Technical Director at Kraftwerk Living Technologies. “And together with an incredibly visionary client, great partners and suppliers as well as an amazing Kraftwerk Living Technologies team, we managed to do so. We could not be more excited about winning this award and getting such great recognition for the project all across the industry.”

The AV Award was the third honor received for the 5D Castle Theater and followed an InAVation Award for “Most InAVative International Project” in February and an InstallAward as “Best Visitor Attraction Project” in June.

Joe Kleimanhttp://wwww.themedreality.com
Raised in San Diego on theme parks, zoos, and IMAX films, InPark's Senior Correspondent Joe Kleiman would expand his childhood loves into two decades as a projectionist and theater director within the giant screen industry. In addition to his work in commercial and museum operations, Joe has volunteered his time to animal husbandry at leading facilities in California and Texas and has played a leading management role for a number of performing arts companies. Joe previously served as News Editor and has remained a contributing author to InPark Magazine since 2011. HIs writing has also appeared in Sound & Communications, LF Examiner, Jim Hill Media, The Planetarian, Behind the Thrills, and MiceChat His blog, ThemedReality.com takes an unconventional look at the attractions industry. Follow on twitter @ThemesRenewed Joe lives in Sacramento, California with his wife, dog, and a ghost.
Share
Facebook
Twitter
Linkedin
Email
Print
WhatsApp
Pinterest
ReddIt
Tumblr
Previous articlePHOTOS: MOTIONGATE Dubai Prepares for Opening
Next articleThinkwell Group Re-envisions Richard Nixon Presidential Library and Museum for New Generations of Visitors