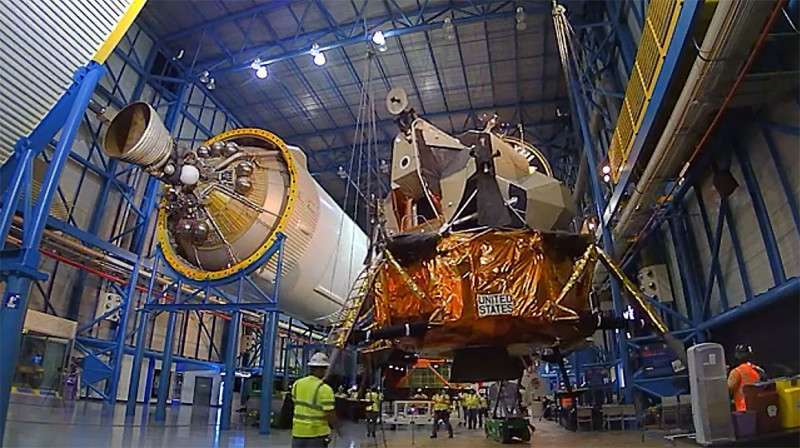 Lunar Module 9 (LM-9) has “landed” atKennedy Space Center Visitor Complex’s Apollo/Saturn V Center. This summer, guests will be able to get a closer look at LM-9, one of only three remaining Lunar Modules designed for mission use. Previously suspended from the ceiling, the relocation of the module is part of an initiative to reimagine the Apollo/Saturn V Center as Kennedy Space Center Visitor Complex gears up for the 50th anniversary celebration of Apollo 11.

Originally intended to fly on Apollo 15, LM-9 was replaced with an Extended Lunar Module when the Lunar Rover was added to the mission. In 2017, this American relic was completely refurbished to preserve for generations to come. The careful relocation of the historic artifact took place over several hours to ensure its safety. Visit the following link to view a time-lapse of the move.

In celebration of the 50th anniversary, visitors to the Apollo/Saturn V Center will be met with a host of additions and enhancements as it is reimagined with a renovated “sense of arrival” that includes revamped landscaping, thematic signage and more, setting a new tone for the experience. At the entrance to the Lunar Theater, guests will be transported back to 1969 as they step into a period living room recreation to experience what it was like to watch the Moon landing. Other enhancements include an enriched Touch the Moon exhibit, a Moon Tree garden, Fisher Space Pen legacy display, a closer look at the CSM-119, and more. The Astrovan, which transported astronauts to the launch pad and can be seen in the movie “First Man,” is also on display at the Apollo/Saturn V Center.

Joe Kleimanhttp://wwww.themedreality.com
Raised in San Diego on theme parks, zoos, and IMAX films, InPark's Senior Correspondent Joe Kleiman would expand his childhood loves into two decades as a projectionist and theater director within the giant screen industry. In addition to his work in commercial and museum operations, Joe has volunteered his time to animal husbandry at leading facilities in California and Texas and has played a leading management role for a number of performing arts companies. Joe previously served as News Editor and has remained a contributing author to InPark Magazine since 2011. HIs writing has also appeared in Sound & Communications, LF Examiner, Jim Hill Media, The Planetarian, Behind the Thrills, and MiceChat His blog, ThemedReality.com takes an unconventional look at the attractions industry. Follow on twitter @ThemesRenewed Joe lives in Sacramento, California with his wife, dog, and a ghost.
Share
Facebook
Twitter
Linkedin
Email
Print
WhatsApp
Pinterest
ReddIt
Tumblr
Previous articleDEAL show showcases more than 300 exhibitors from 40 countries
Next articleChristie illuminates twin-dome theater at Shanghai Haichang Ocean Park