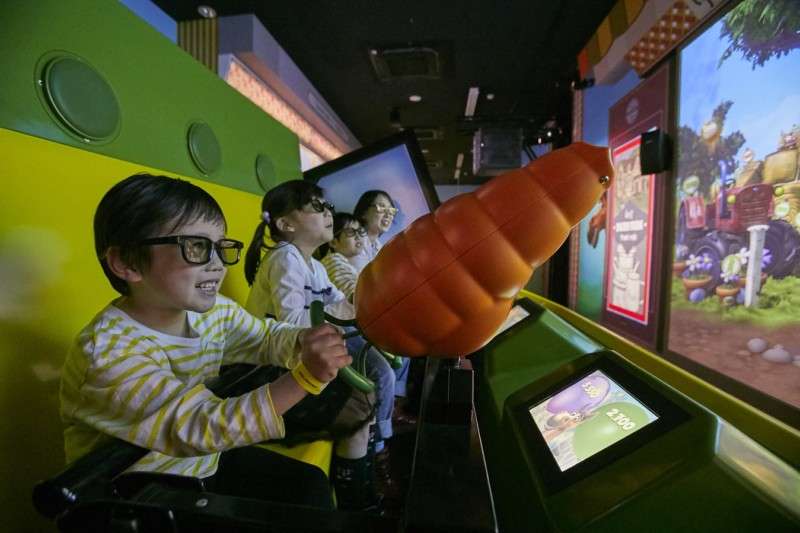 Nagashima Spa Land is a major amusement park in Kuwana, Japan, featuring many different rides, attractions and a water park. Lagotronics Projects designed the new indoor attraction for an existing building in the park.

The park named the Farm Fair ride ‘Farm de Bang Bang’. Lagotronics Projects delivered the storyline, interactive technique/equipment, 3D video game and lighting installation. The Dark Ride has 7 3D game scenes, a pre- and post-show and 10 agricultural-themed vehicles, each seating 4 persons. Every vehicle has 2 built-in score monitors, so visitors can keep track of their score. Every ride-player has his own carrot-shooter to play the 3D video game.

During the pre-show, the game is explained by the main characters of the Farm Fair story: Horse, Cat and Rooster. Visitors even get the opportunity to practice before boarding their vehicles.

The real-time video game is based on full HD quality graphics. Targets appearing in the game show the number of points that can be scored. Once hit, it will give an immediate visible effect. This ‘art of interactivity’ gives players the feeling of a real game in which they interact with and change the gameplay. In addition, they are awarded with points for every hit. The game scenes take players to different locations at the farm, such as the meadow, barn, kitchen and vegetable garden. Some of the scenes are especially designed for Nagashima Spa Land.

When the final game scene is over, the player sees his own picture on the screen together with his personal score. When leaving the ride, visitors pass by 2 big score monitors which show their scores as well as the high scores of the day and season. This will challenge them to ride & play again to improve their score and defeat their fellow-players.

Mark Beumers, CEO of Lagotronics Projects, is very delighted with this project: “We’re very proud of having delivered another Farm Fair themed ride, besides the Farm Fair GameChanger in Bayern-Park (Germany). Horse, Cat and Rooster told me they’re very excited to enjoy Farm Fair in Japan as well, only this time in a Dark Ride!

Lagotronics’ partners on the project were ART Engineering and KCA Corporation.

Joe Kleimanhttp://wwww.themedreality.com
Raised in San Diego on theme parks, zoos, and IMAX films, Joe Kleiman would expand his childhood loves into two decades as a projectionist and theater director within the giant screen industry. In addition to his work in commercial and museum operations, Joe has volunteered his time to animal husbandry at leading facilities in California and Texas and has played a leading management role for a number of performing arts companies. Joe has been News Editor and contributing author to InPark Magazine since 2011. HIs writing has also appeared in Sound & Communications, LF Examiner, Jim Hill Media, and MiceChat. His blog, ThemedReality.com takes an unconventional look at the attractions industry. Follow on twitter @ThemesRenewed Joe lives in Sacramento, California with his fiancé, two dogs, and a ghost.
Share
Facebook
Twitter
Linkedin
Email
Print
WhatsApp
Pinterest
ReddIt
Tumblr
Previous articleFive rules for a successful Expo pavilion
Next articleMickey and friends headed to Disneyland Resort in trio of new attractions