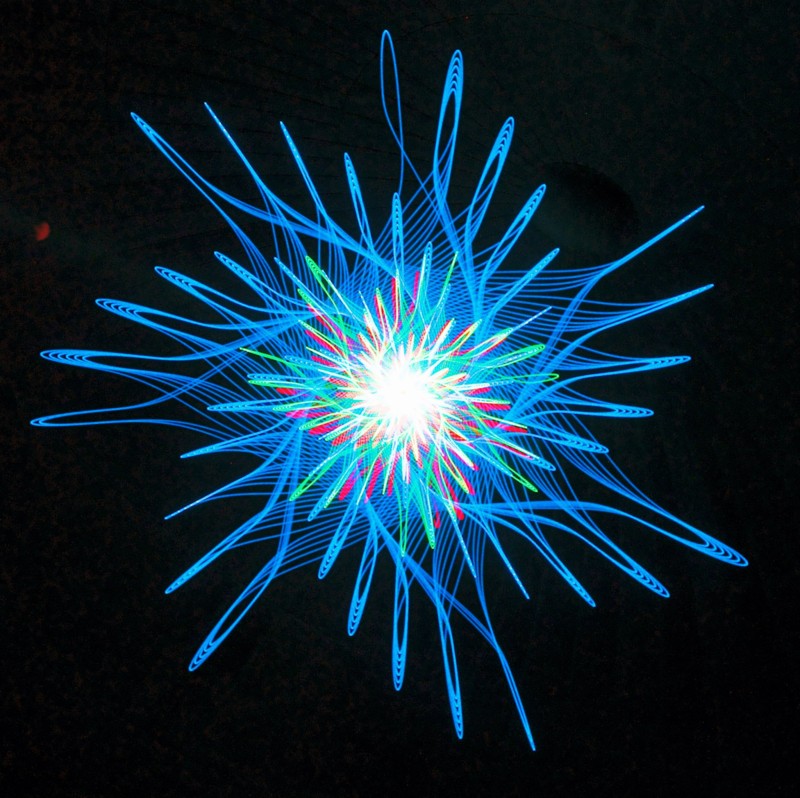 It’s a blast from the past! LASERIUM®, the original cosmic laser show, returns to The Saint Louis Science Center for a limited engagement celebrating the 50th Anniversary of the James S. McDonnell Planetarium. “It’s the one thing that I have been asked consistently since I first arrived in Saint Louis over a year ago.” said Bert Vescolani, President and CEO of the Saint Louis Science Center. “Can you bring back the laser shows? Well, you asked for it: Lights! Music! Planetarium! They’re back!“

LASERIUM first premiered at the James S. McDonnell Planetarium in the summer of 1975 and became an instant hit, captivating audiences with a collage of vibrant colors and laser illusions set to an eclectic mix of music. “When you show that on the Planetarium’s 80-foot dome, you’re just blown away,” said John Lakey, Director of the James S. McDonnell Planetarium. “LASERIUM was a huge sensation. Shows sold out all the time.”

One of the first to see LASERIUM at the Planetarium was Brian Wirthlin who became not only a fan but also a student of the art and technology. “I am a ‘laserist’ which means I’m an artist who uses laser technology, “said Wirthlin, who has revived LASERIUM, even digitizing the original analog tapes. The music selection is a mix of classic and rock, from Holst’s Neptune to Pink Floyd’s Echoes.

LASERIUM opened to the general public on April 5, 2013 with two shows at 8:30 PM and 10:00 PM. Admission is $8 for members, $10 for non-members. The laser shows will continue on selected dates through April.

Judith Rubin
Judith Rubin ([email protected]) is a leading journalist, publicist, strategist, blogger, content marketing specialist and connector in the international attractions industry. She excels at writing about all aspects of design and technical design, production and project management. Areas of special interest include AV integration and show control, lighting design and acoustics, specialty cinema, digital video and world’s fairs. Judith has ties to numerous industry organizations. From 2005-2020 she ran communications, publications and social media for the Themed Entertainment Association (TEA). In 2013, she was honored with the TEA Service Award. She was development director of IMERSA, and co-chair of the 2014 IMERSA Summit. She was publicist for the Large Format Cinema Association in the 1990s, now part of the Giant Screen Cinema Association (GSCA) and has also contributed to the publications of PLASA, IAAPA and the International Planetarium Society. Already making her mark as a magazine and book editor, Judith joined World’s Fair magazine in 1987, which introduced her to the attractions industry. Launching as a freelancer in the mid 1990s she has contributed to dozens of publications and media outlets including Funworld, Lighting&Sound America, Sound & Communications, Urban Land, The Raconteur and The Planetarian. She joined InPark in 2010. Judith earned a Bachelor of Fine Arts from Pratt Institute. She has lived in New York City and the San Francisco Bay Area, and now makes her home in Saint Louis, where she is active in the local arts and theater community.
Share
Facebook
Twitter
Linkedin
Email
Print
WhatsApp
Pinterest
ReddIt
Tumblr
Previous article
Brother Moon & Sister Sun’s TALL TALE: new ride to be designed by Gary Goddard for Lotte World
Next article
At LEGOLAND® Discovery Center Westchester, there’s something for grownups too