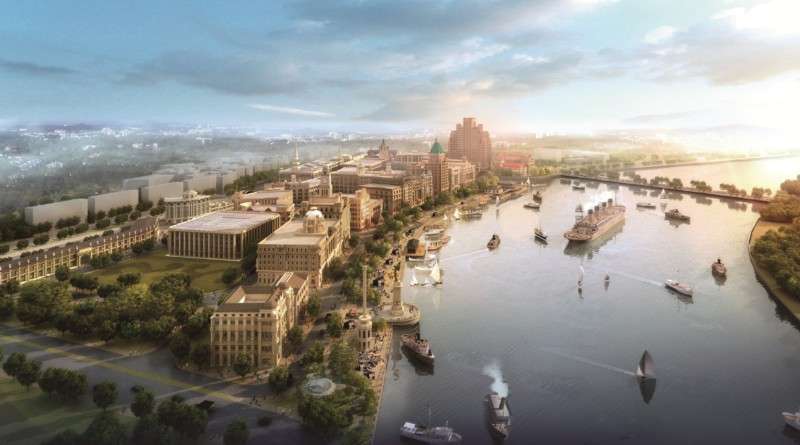 China’s theme park landscape welcomed yet another major player this week, as the “Dream Bund” movie studio and theme park made its grand debut on Saturday, August 17th, in Hengdian, the country’s “City of Film and Television.” Dream Bund’s premiere is part of the continued expansion of the world’s largest film and television shooting site, notable for its collection of full-scale practical sets that include intricately-crafted recreations of over a dozen iconic Chinese palaces and locales.

The new theme park, styled to evoke Shanghai’s iconic waterfront district during the first half of the 20th Century, has been uniquely designed to allow for concurrent operations of both its theme park attractions, and up to twenty film and television productions, at any given time. Scheduled to roll-out in phases over the next year, highlights of the park’s opening day program include the signature Trolley Tour, a historical museum, and the Broadway Hotel, modeled after Shanghai’s iconic Broadway Mansions building.

Hollywood-based Legacy Entertainment was engaged by Hengdian World Studios to design and master plan the 280,000 square meter project. Legacy has a sizable roster of previous, massive, and highly-successful Chinese projects, which have included Galaxy Macau, Studio City Macau, Shanghai Haichang Ocean Park, and Harbin’s Kingdom of Poseidon,  among others.

Reflecting on the project’s unique challenges, Barry Kemper, Partner and Chief Operating Officer at Legacy Entertainment, said, “Capturing the inherent beauty and romance of Shanghai’s yesteryear was the easy part for us. Balancing the operational demands of both a movie studio and a theme park, each complex in and of itself, was not. We sincerely enjoyed our collaboration with Hengdian World Studios, as they are not only one of China’s best tourism operators, but their attention to detail is second to none in the market.”

The Dream Bund project was born out of a global demand by filmmakers to shoot film and TV productions along the Shanghai Bund, one of the world’s most recognizable locations. Other sections of the park will feature finely-crafted replicas of Nanjing Road, the Paramount Theater, and a Hutong neighborhood, among many other iconic locales.

Joe Kleimanhttp://wwww.themedreality.com
Raised in San Diego on theme parks, zoos, and IMAX films, InPark's Senior Correspondent Joe Kleiman would expand his childhood loves into two decades as a projectionist and theater director within the giant screen industry. In addition to his work in commercial and museum operations, Joe has volunteered his time to animal husbandry at leading facilities in California and Texas and has played a leading management role for a number of performing arts companies. Joe previously served as News Editor and has remained a contributing author to InPark Magazine since 2011. HIs writing has also appeared in Sound & Communications, LF Examiner, Jim Hill Media, The Planetarian, Behind the Thrills, and MiceChat His blog, ThemedReality.com takes an unconventional look at the attractions industry. Follow on twitter @ThemesRenewed Joe lives in Sacramento, California with his wife, dog, and a ghost.
Share
Facebook
Twitter
Linkedin
Email
Print
WhatsApp
Pinterest
ReddIt
Tumblr
Previous articleTechnifex announces three new executives
Next articleJRA team members take to global stage with industry presentations this Fall