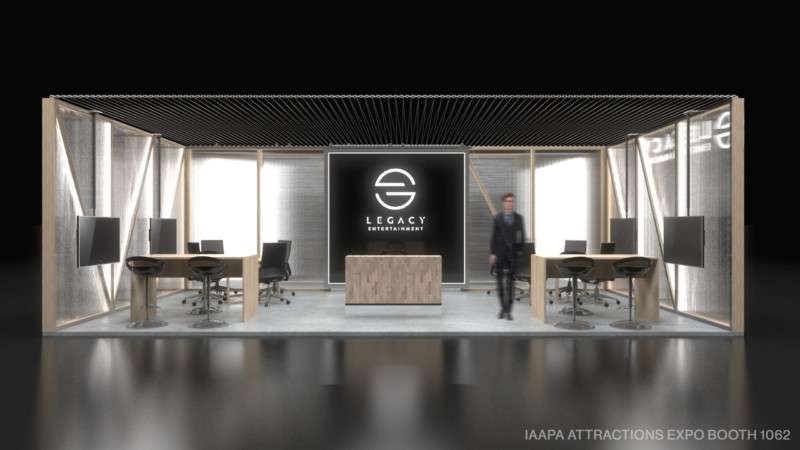 Legacy Entertainment has completed its brand evolution and will make its official company debut under its new banner during IAAPA 2018 in Orlando. There, the firm will sport a striking new booth that will boldly represent the completion of this yearlong rebranding and restructuring process. (Legacy Entertainment’s Booth Number at IAAPA is 1062)

The announcement of the new brand also coincides with the completion of the transition from a sole proprietorship to senior employee ownership.

Speaking from the company’s international headquarters in Hollywood, California, Barry Kemper, one of the owners of Legacy Entertainment and the company’s Chief Operating Officer, stated that the company will be making “A number of very impressive announcements,” during the upcoming IAAPA Trade Show in Orlando, November 12 -16.

“While we now have a new name and a new logo, we are still providing our clients with the same standard-setting creative services for their bold and innovative projects based around the world,” Kemper said. “During the past 16 years, we’ve assembled the industry’s top talents, and have recently even made several new hires to strengthen our already robust team.”

Kemper adds that the company’s evolution has concluded at an optimal time. He says, “Soon, two of our largest and most exciting projects to date will be coming online – Shanghai Haichang Ocean Park, and Chimelong Ocean World, two massive projects in China slated to debut in November 2018 and mid-2019, respectively. The openings of these two major attractions will allow us a wonderful opportunity to reintroduce ourselves to the global industry as Legacy Entertainment.”

Legacy Entertainment will also be represented at IAAPA by a speaking engagement by Taylor Jeffs, also an owner of Legacy Entertainment and the company’s President & Chief Creative Officer, as part of the conference’s renowned Educational Seminar Program. On Wednesday, November 14th, from 2:00 to 3:15 PM, Jeffs will speak on the subject of “Applying Immersive Theater Trends to Theme Parks and Attractions.”

Jeffs’ session will provide attendees an exclusive look at how industry leaders are applying trends from immersive theater attractions into the realms of theme parks, museums, retail, and other location-based venues, as guests continue to look for deeper levels of immersion and interactions from these experiences. Through specific examples, Jeffs will cite the key principles of immersive theater and how they directly influence the attractions industry, how they will shape the future of theme parks and attractions, and how companies such as Legacy are now leading the way into this exciting new field.

Joe Kleimanhttp://wwww.themedreality.com
Raised in San Diego on theme parks, zoos, and IMAX films, InPark's Senior Correspondent Joe Kleiman would expand his childhood loves into two decades as a projectionist and theater director within the giant screen industry. In addition to his work in commercial and museum operations, Joe has volunteered his time to animal husbandry at leading facilities in California and Texas and has played a leading management role for a number of performing arts companies. Joe previously served as News Editor and has remained a contributing author to InPark Magazine since 2011. HIs writing has also appeared in Sound & Communications, LF Examiner, Jim Hill Media, The Planetarian, Behind the Thrills, and MiceChat His blog, ThemedReality.com takes an unconventional look at the attractions industry. Follow on twitter @ThemesRenewed Joe lives in Sacramento, California with his wife, dog, and a ghost.
Share
Facebook
Twitter
Linkedin
Email
Print
WhatsApp
Pinterest
ReddIt
Tumblr
Previous articleSix Flags to manage Magic Waters Waterpark in Rockford, Illinois
Next articleCreating magic with light