Winter Haven, FL, USA – In an evening reminiscent of a classic Hollywood movie premiere, LEGOLAND Florida Resort welcomed celebrities, media and VIP guests to a gala event Jan. 28 for the grand opening of “The LEGO Movie™ 4D A New Adventure.” The theatrical attraction reunites Emmet and friends from “The LEGO Movie” in an all-new short story combining dazzling 3D computer animation with 4D, real-world effects such as wind, water and fog.

The resort built for kids staged a kid-friendly world premiere, punctuated by twin blasts of glittering confetti that welcomed the Master Builder heroes back to the big screen. Hundreds of fans strolled an interactive special effects-filled red carpet before entering the Wells Fargo Fun Town Theater to celebrate the return of Emmet, Wyldstyle, MetalBeard, Benny and Unikitty. 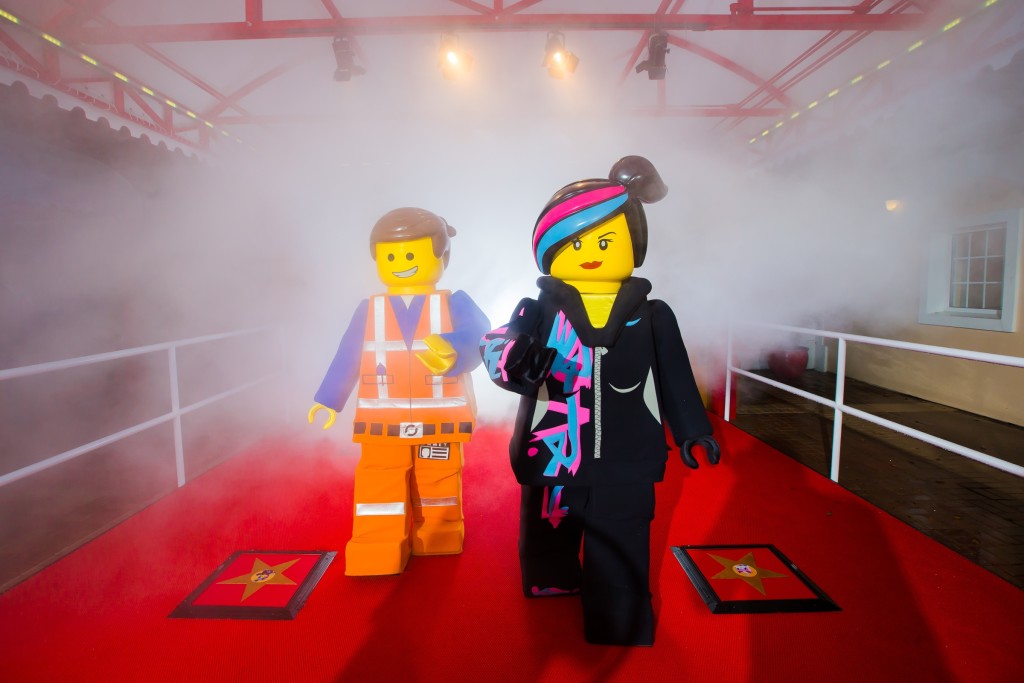 In 2014, kids around the world embraced the adventures of Emmet, an ordinary, rules-following, perfectly average LEGO minifigure who is mistakenly identified as the key to saving the world in “The LEGO Movie™,” which went on to gross more than $400 million worldwide.

Fans can now find out what happened after the movie, now that “The LEGO Movie™ 4D A New Adventure” has officially opened at LEGOLAND Florida Resort.

Set after the events of the movie, the 12 ½-minute story finds the gang entangled in an Evil Secret Plot involving a mysterious theme park inspired by their adventures in “The LEGO Movie,” one that requires them to call on the Master Builder skills of a surprise ally to save the day.

“The LEGO Movie™ 4D A New Adventure” was directed by Rob Schrab, who is making his feature film directorial debut with “The LEGO Movie Sequel,” set to open May 18, 2018. When it came to designing the attraction, he said a strong story was critical to its success.

“We only spotlight them for a fraction of the amount of time,” he said, “so it’s important to get to the fun as soon as possible. This is the first time Emmet, Wyldstyle and the gang meet since the film.”

Developed in collaboration with LEGOLAND owner Merlin Entertainments Group and Warner Bros. Consumer Products, the attraction was created by Los Angeles-based Pure Imagination Studios with input from Phil Lord and Christopher Miller, the talented writer-directors who brought “The LEGO Movie” to life, along with producer Dan Lin.

The result is a blend of the same sly humor and breathtaking, built-with-LEGO visuals that made the first-ever, full-length theatrical LEGO film a global hit among kids and adults alike.

For Offerman, the opportunity to slip back into MetalBeard’s bricks was a welcome one.

“I have worked with Rob on ‘Childrens Hospital’ and ‘Parks and Recreation,’ so it was like a nice reunion of old pals from summer camp,” he said of making the attraction. “We just tried to make each other laugh with silly renderings of dead-serious pirate-y mayhem.”

Following its debut in Florida, “The LEGO Movie™ 4D A New Adventure” will opened at LEGOLAND California Resort in Carlsbad, Calif., and will open at all other LEGOLAND theme parks and LEGOLAND Discovery Centers worldwide throughout 2016.

Joe Kleimanhttp://wwww.themedreality.com
Raised in San Diego on theme parks, zoos, and IMAX films, InPark's Senior Correspondent Joe Kleiman would expand his childhood loves into two decades as a projectionist and theater director within the giant screen industry. In addition to his work in commercial and museum operations, Joe has volunteered his time to animal husbandry at leading facilities in California and Texas and has played a leading management role for a number of performing arts companies. Joe previously served as News Editor and has remained a contributing author to InPark Magazine since 2011. HIs writing has also appeared in Sound & Communications, LF Examiner, Jim Hill Media, The Planetarian, Behind the Thrills, and MiceChat His blog, ThemedReality.com takes an unconventional look at the attractions industry. Follow on twitter @ThemesRenewed Joe lives in Sacramento, California with his wife, dog, and a ghost.
Share
Facebook
Twitter
Linkedin
Email
Print
WhatsApp
Pinterest
ReddIt
Tumblr
Previous articlePalace Entertainment’s Fernando Eiroa Appointed CEO of Parques Reunidos in Advance of Company Going Public
Next articleQuassy To Start 108th Season with New Ride and New Slides