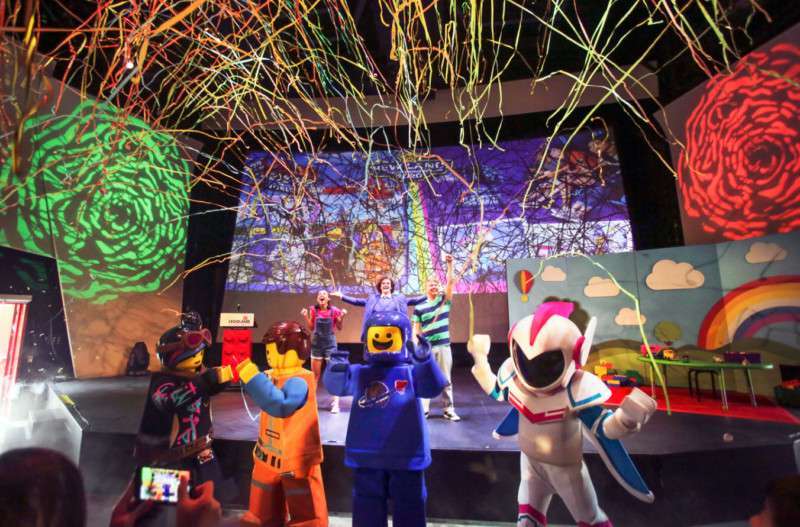 “The LEGO MOVIE WORLD is LEGOLAND California Resort’s largest Park addition ever and we are thrilled to create an interactive experience that fully immerses guests into a world that was so brilliantly created by LEGO and celebrated by the hugely popular LEGO film franchise from our friends at Warner Bros.,” said General Manager Peter Ronchetti. “We can’t wait to see the faces on all the children as they interact within the creative world of Bricksburg and experience the incredible Masters of Flight ride which is taking the traditional soaring-type of ride to new heights.”

On the flagship ride Masters of Flight, guests hop aboard Emmet’s triple decker flying couch for a thrill-seeking adventure. The flying theater attraction whisks guests away on a suspended ride with a full-dome virtual screen, giving the sensational feeling of flying above memorable lands such as Middle Zealand, Cloud Cuckoo Land, Pirates Cove and Outer Space. Along the way, riders will see some familiar faces along with some new ones like Sweet Mayhem, a star character from THE LEGO® MOVIE 2: The Second Part. Masters of flight features cutting edge technology including a 180-degree turn in the ride experience.

The LEGO MOVIE WORLD is based on the blockbuster films The LEGO Movie and The LEGO Movie 2: The Second Part. The new land fully immerses guests into the LEGO Movie universe and places them onto the streets of Bricksburg.  In addition to Masters of Flight, kids and families will get to enjoy the rush of falling from Unikitty’s Disco Drop and experiencing the many personalities of the fearless feline. The new ride launches guests to the top of Cloud Cuckoo Land, then drops, spins and bounces them back down to earth, creating a thrilling and fun experience. The adventure doesn’t stop there as guests can explore Benny’s Play Ship, ride a fully reimagined carousel, and meet Emmet and all of his friends in Emmet’s Super Suite apartment.

Joe Kleimanhttp://wwww.themedreality.com
Raised in San Diego on theme parks, zoos, and IMAX films, Joe Kleiman would expand his childhood loves into two decades as a projectionist and theater director within the giant screen industry. In addition to his work in commercial and museum operations, Joe has volunteered his time to animal husbandry at leading facilities in California and Texas and has played a leading management role for a number of performing arts companies. Joe has been News Editor and contributing author to InPark Magazine since 2011. HIs writing has also appeared in Sound & Communications, LF Examiner, Jim Hill Media, and MiceChat. His blog, ThemedReality.com takes an unconventional look at the attractions industry. Follow on twitter @ThemesRenewed Joe lives in Sacramento, California with his fiancé, two dogs, and a ghost.
Share
Facebook
Twitter
Linkedin
Email
Print
WhatsApp
Pinterest
ReddIt
Tumblr
Previous articleTake a ride to Orion on Kings Islands 2020 giga coaster
Next articleDisney Parks previews D23 announcements

SoFi Stadium to be added to LEGOLAND California’s Miniland U.S.A.