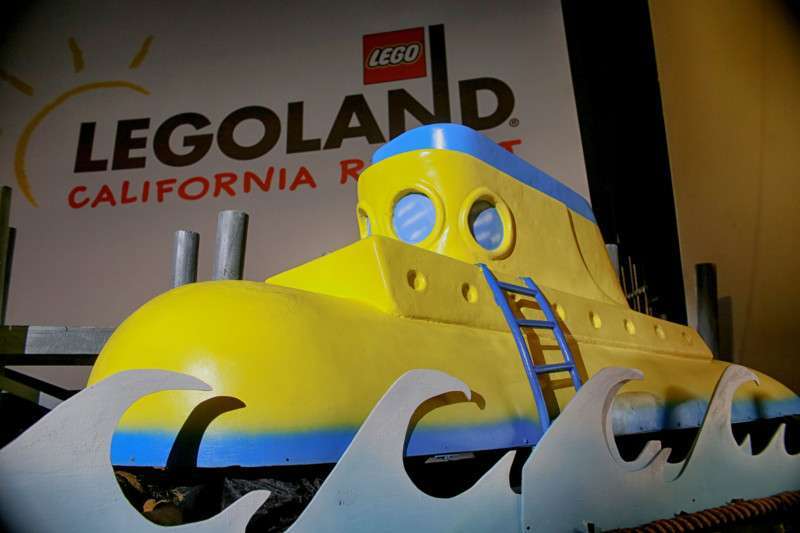 LEGOLAND® California Resort’s General Manager Peter Ronchetti announced at today’s press conference new adventures for 2018.  In January, a new 4-D movie launches, followed by the opening of LEGOLAND® Castle Hotel in the spring and, just announced, LEGO® City Deep Sea Adventure submarine ride is opening in the summer. LEGO® City Deep Sea Adventure is Merlin Entertainment’s single largest investment in any LEGOLAND® Park and will take passengers aboard a real submarine where they will be submerged underwater and immersed in an ocean habitat.

“I’m extremely excited for our guests to experience LEGO City Deep Sea Adventure submarine ride,” said Ronchetti. “For the first time in the United States, we are bringing our guests onboard a real submarine where they’ll go underwater to discover a truly amazing world filled with more than 2,000 different real sea animals, including several species of stingrays and a variety of exotic sharks.”

The ride will open in summer of 2018 and takes guests on a submarine ride looking for lost treasure on a sunken LEGO shipwreck. Among the real sea animals are bright LEGO octopi, marine tropical fish and LEGO scuba divers. Touchscreens at each porthole inside the sub are used by guests to help the LEGO minifigure dive team identify gems, pearls, LEGO gold coins and more throughout the journey. Up to 12 guests will board one of eight submarines that are designed after the LEGO City Deep Sea Adventure line of toys.

The summer exploration ride is opening shortly after LEGOLAND Castle Hotel opens in the spring of 2018. “We are excited to expand our LEGOLAND kingdom with LEGOLAND Castle Hotel, not only for the new adventures it will bring to our guests, but also the new jobs it will create for the community,” said Ronchetti. Ronchetti announced the hiring will start today for 200 new Model Citizens (employees) to work at new premium themed 250-room hotel. Thirty leadership roles are needed including Head Chef, Front Office Manager and Food and Beverage Manager. “We’ll be starting to recruit the other positions as early as December as we’d like to have everyone royally trained and ready to go by the Hotel’s opening in spring!” Some of the positions needed include cooks, valet, housekeepers, entertainers and more. Interested individuals can visit http://jobs.LEGOLAND.com/.

Joe Kleimanhttp://wwww.themedreality.com
Raised in San Diego on theme parks, zoos, and IMAX films, InPark's Senior Correspondent Joe Kleiman would expand his childhood loves into two decades as a projectionist and theater director within the giant screen industry. In addition to his work in commercial and museum operations, Joe has volunteered his time to animal husbandry at leading facilities in California and Texas and has played a leading management role for a number of performing arts companies. Joe previously served as News Editor and has remained a contributing author to InPark Magazine since 2011. HIs writing has also appeared in Sound & Communications, LF Examiner, Jim Hill Media, The Planetarian, Behind the Thrills, and MiceChat His blog, ThemedReality.com takes an unconventional look at the attractions industry. Follow on twitter @ThemesRenewed Joe lives in Sacramento, California with his wife, dog, and a ghost.
Share
Facebook
Twitter
Linkedin
Email
Print
WhatsApp
Pinterest
ReddIt
Tumblr
Previous articleVRstudios Maximizes NVIDIA and Unity Technology for “Terminal 17” VR Arena Experience
Next articleDubai Parks and Resorts: Operationally speaking