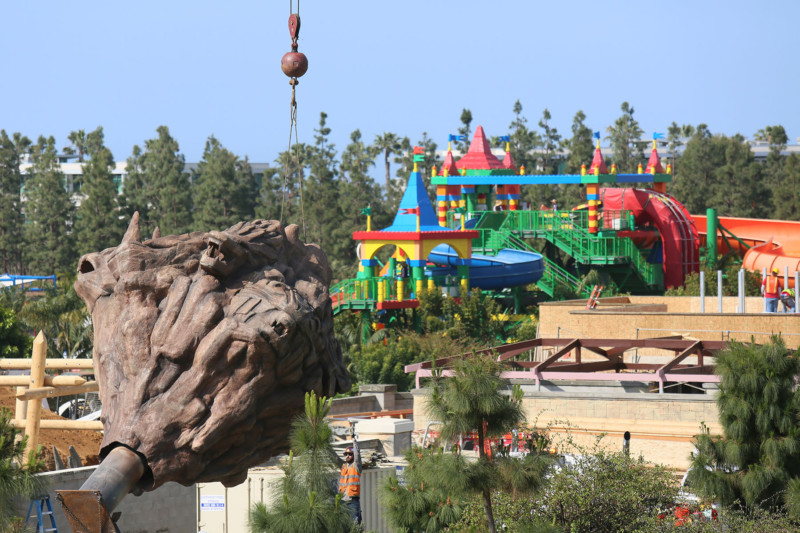 [quote]Mt. Cavora can be seen from anywhere inside the Water Park as it “floats” 40-feet above the wave pool releasing 400 gallons of water every minute for guests to splash about and enjoy.”[/quote]

Carlsbad, CA, USA (April 3, 2014) – Who says moving mountains isn’t possible?  LEGOLAND California Resort took on that challenge by bringing one of the largest features of the new LEGO Legends of Chima Water Park presented by Cartoon Network to Carlsbad from Lake Elsinore.  The 40-foot tall “floating” Mt. Cavora will be featured in the new interactive Lion Temple Wave Pool, one of the new areas in the Chima Water Park opening May 24, 2014.

This icon from the LEGO Group’s newest hit product “Legends of Chima,” was created for the Resort by Storyland Studios in Lake Elsinore, CA and took a team of 20 builders more than four months to design and construct. A caravan of workers traveled in the early hours of the night moving power lines and other obstacles to ensure a safe journey for the colossal Water Park feature that was installed with the use of a heavy loading crane. The floating mountain, known for providing the great energy source “CHI” to the eight animal tribes, is 23-feet tall, 13-feet wide and weighs more than 11,000 pounds.  An animal from each tribe is represented on Mt. Cavora: a lion, an eagle, a crocodile, a gorilla, a bear, a rhinoceros, a wolf and a raven. 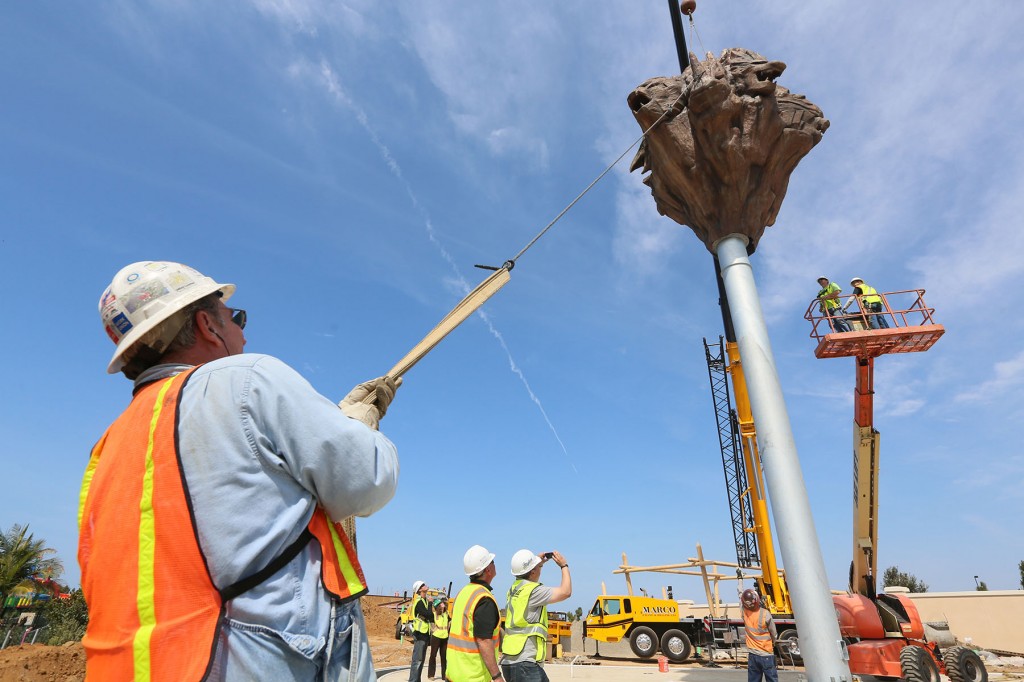 Areas featured in the new LEGO Legends of Chima Water Park include: Lion Temple Wave Pool – The centerpiece of the new Water Park where guests make their way through a LEGO archway and into an interactive wave pool designed for families with young children.  Cragger’s Swamp – This hands-on water play area invites guests to ride water slides, blast water cannons and jets and slide through the head of a massive crocodile. More than 50 interactive water play features will delight young guests in water that is only one foot deep.  Eglor’s Build-A-Boat – Following in the unique interactive play experience introduced with Build-A-Raft River at LEGOLAND Water Park, Eglor’s Build-A-Boat gives children the opportunity to use their creativity and bring their imaginations to life. Young guests can build their own boat and race against their friends and also build their own LEGO scene in Chima on any of four base plates set in front of model scenes. Wolves’ Den – This is the place to grab a bite when guests get hungry. Enjoy tasty food surrounded by collectibles gathered by the clever wolf tribe. Explorers Forest- In this lush and tropical forest, guests will be greeted by Gorzan the Gorilla in his 15-foot tall mech suit. Rhino Beach – This sand filled oasis offers guests a place to get some shade, lounge and rest. Speedorz Arena- This interactive play area lets guests race their Speedorz through unique obstacles. Forever Rock- Featured just outside Cragger’s Swamp, the iconic rock contains a smaller rock acting as chalk board for kids to tally their achievements just as Cragger and Laval did. For those that want to kick back and stay awhile, 15 new cabanas surround the area for rent.

Joe Kleimanhttp://wwww.themedreality.com
Raised in San Diego on theme parks, zoos, and IMAX films, InPark's Senior Correspondent Joe Kleiman would expand his childhood loves into two decades as a projectionist and theater director within the giant screen industry. In addition to his work in commercial and museum operations, Joe has volunteered his time to animal husbandry at leading facilities in California and Texas and has played a leading management role for a number of performing arts companies. Joe previously served as News Editor and has remained a contributing author to InPark Magazine since 2011. HIs writing has also appeared in Sound & Communications, LF Examiner, Jim Hill Media, The Planetarian, Behind the Thrills, and MiceChat His blog, ThemedReality.com takes an unconventional look at the attractions industry. Follow on twitter @ThemesRenewed Joe lives in Sacramento, California with his wife, dog, and a ghost.
Share
Facebook
Twitter
Linkedin
Email
Print
WhatsApp
Pinterest
ReddIt
Tumblr
Previous article
Johnny Darnell Griggs Named Partner at Law Firm Nolan Heimann
Next article
VIEW PHOTOS FROM THE 2014 TEA SUMMIT