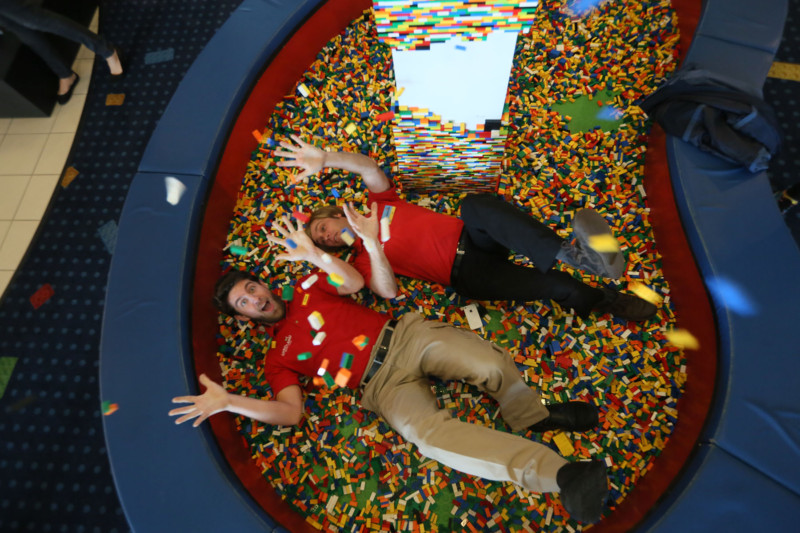 [quote]The Model Builder Challenge kicked off with great success in Denver, made great strides in Dallas, kept the excitement rolling in Santa Barbara, heated up in Phoenix and now concludes in San Francisco.”[/quote]

Carlsbad, CA, USA —   The competition is heading toward the finish line as LEGOLAND California Resort’s Model Builders, Tim Sams and Rob McCarthy make their last stop of the “Model Builder Challenge”, competing against one another to build models based on the Resort’s new LEGO Legends of Chima Water Park presented by Cartoon Network, opening Memorial Day weekend. The fifth and final city of the Model Builder Challenge is San Francisco on May 3, between 11 a.m. and 2 p.m. at the Children’s Creativity Museum.

Fans all over the world are interacting with each Model Builder via Facebook and providing suggestions, asking questions, showing off their own models as inspiration and cheering on their favorite builder. Fans are also encouraged to vote for Tim (#BuilderTim) or Rob (#BuilderRob) in an effort to help their favorite builder win the ultimate prize: a magical LEGO orb of CHI. Fans voting online can win their own prize: a family four pack of tickets to LEGOLAND California Resort. On May 3, fans coming to the Children’s Creativity Museum can not only watch the Model Builders compete, but see exclusive LEGO models including a miniature version of the new Water Park and a four-foot LEGO model of the Legends of Chima character Laval.  In additon, guests that day will have a chance to win tickets to visit the Resort and experience the new LEGO Legends of CHIMA Water Park for answering trivia questions. Other surprise prizes will also be given out to guests every half hour while supplies last.

Joe Kleimanhttp://wwww.themedreality.com
Raised in San Diego on theme parks, zoos, and IMAX films, Joe Kleiman would expand his childhood loves into two decades as a projectionist and theater director within the giant screen industry. In addition to his work in commercial and museum operations, Joe has volunteered his time to animal husbandry at leading facilities in California and Texas and has played a leading management role for a number of performing arts companies. Joe has been News Editor and contributing author to InPark Magazine since 2011. HIs writing has also appeared in Sound & Communications, LF Examiner, Jim Hill Media, and MiceChat. His blog, ThemedReality.com takes an unconventional look at the attractions industry. Follow on twitter @ThemesRenewed Joe lives in Sacramento, California with his fiancé, two dogs, and a ghost.
Share
Facebook
Twitter
Linkedin
Email
Print
WhatsApp
Pinterest
ReddIt
Tumblr
Previous articleAlaska Airlines Donates $2.5 Million to Museum of Flight for New Education Center
Next articleShetland Ponies Now Offered with Ranch House Rentals at Slagharen Resort