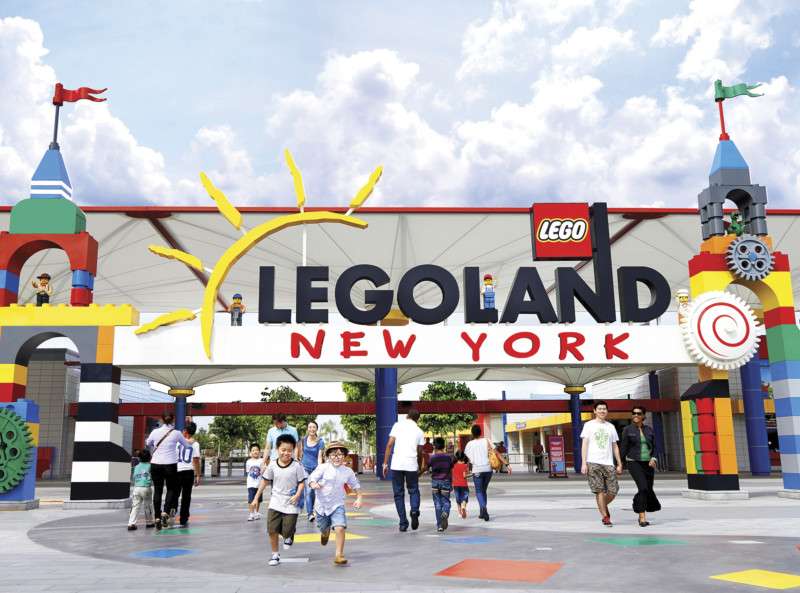 Merlin Entertainments Chief Executive Officer Nick Varney officially announced that LEGOLAND® New York is being built. The gathering took place at the Palacio Catering and Conference Center in Goshen on Oct. 25, with more than 250 people attending.

After Varney officially announced that LEGOLAND New York will open in 2020, more than 30,000 LEGO bricks were dumped onto the stage by construction vehicles and 1,500 balloons cascaded from the ceiling much to the delight of local school children in attendance.

“We have spent a lot of time building relationships in the community, listening and responding to concerns, and we are looking forward to building a theme park that will enhance the community and be a tremendous neighbor,” said Varney. “I am honored to announce LEGOLAND New York is officially moving forward.”

After more than a year of public meetings and hearings in addition to a thorough and transparent review process by officials, LEGOLAND New York has been granted conditional approval of its site plan by the Town of Goshen Planning Board, allowing it to officially move ahead with building the Park.

At the ceremony, Varney spoke about the uniqueness of LEGOLAND parks and reinforced that Merlin picked an outstanding location to construct its newest LEGOLAND Park.

“We are humbled to join the Goshen community,” said Varney. “I can pledge to you that LEGOLAND New York will be a trusted and valued member of this community. I am thrilled that Goshen is the place where we will build our third LEGOLAND Park in the U.S. – the first in the Northeast. I am eager to continue with our $350 million investment with significant more investments to follow in the years to come, providing Goshen, Orange County, the Hudson Valley and New York State with significant economic benefits.”

LEGOLAND New York anticipates generating $283 million in sales tax and hotel occupancy tax for Orange County over the period of 30 years. The Town of Goshen would receive about $71 million in revenue from the host community fee LEGOLAND will pay and its share of PILOT payments and tax payments.

The Park’s design will build upon the successful models of parks operating in California, Florida, the United Kingdom, Germany, Malaysia, Denmark, Dubai and Japan.

The New York Park will be open seasonally from April 1 to November 1.

Joe Kleimanhttp://wwww.themedreality.com
Raised in San Diego on theme parks, zoos, and IMAX films, InPark's Senior Correspondent Joe Kleiman would expand his childhood loves into two decades as a projectionist and theater director within the giant screen industry. In addition to his work in commercial and museum operations, Joe has volunteered his time to animal husbandry at leading facilities in California and Texas and has played a leading management role for a number of performing arts companies. Joe previously served as News Editor and has remained a contributing author to InPark Magazine since 2011. HIs writing has also appeared in Sound & Communications, LF Examiner, Jim Hill Media, The Planetarian, Behind the Thrills, and MiceChat His blog, ThemedReality.com takes an unconventional look at the attractions industry. Follow on twitter @ThemesRenewed Joe lives in Sacramento, California with his wife, dog, and a ghost.
Share
Facebook
Twitter
Linkedin
Email
Print
WhatsApp
Pinterest
ReddIt
Tumblr
Previous article
Six Flags Announces Record Revenue for Year to Date
Next article
National Air and Space Museum Embarking on Seven Year Transformation