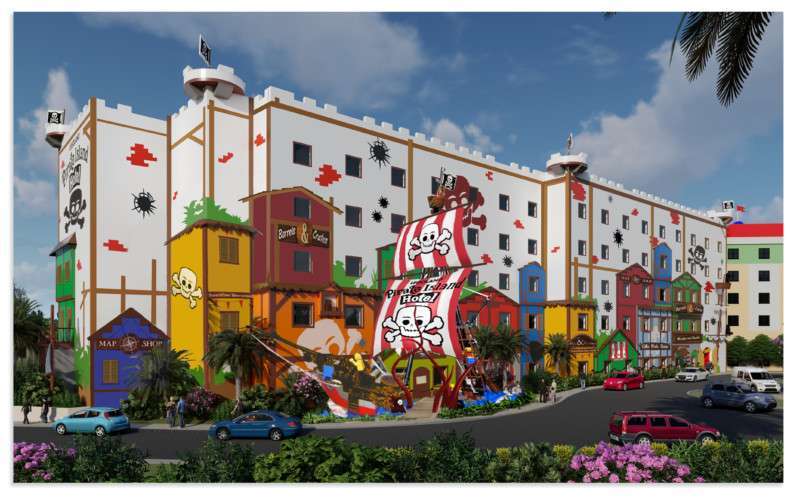 LEGOLAND® Pirate Island Hotel, the first LEGO® Pirate themed hotel in North America, is set to open April 17, 2020. The newest on-site accommodation at LEGOLAND® Florida Resort will invite brick fans to vacation like a pirate just steps from the entrance to the theme park built for kids. In honor of “International Talk Like a Pirate Day”, the resort is releasing an animated “fly-through” video which offers an in-depth behind-the-scenes look inside this unique resort.

LEGOLAND Pirate Island Hotel will be the resort’s third accommodation and will feature 150 fun-filled rooms (including four suites), a heated pool with pool deck (complete with LEGO®soft bricks to build in the pool), hundreds of LEGO models, in-room LEGO treasure hunts and exclusive character experiences. Similar to the popular LEGOLAND Hotel, each room will include two separate spaces; a kid’s sleeping area and an adult area. The adult side of the room comes furnished with LEGO pirate décor, a king bed and television, while the other separate area just for kids will feature a bunk bed, LEGO play areas and their very own television to watch all of their favorite LEGO movies! The new hotel rooms will also be fully themed with interactive LEGO Pirate models throughout and include an array of humorous decor designed specifically for a kid-centric family vacation.

The five-story hotel will house the pirate-themed Shipwreck Restaurant, Smuggler’s Bar for adult swashbucklers, an entertainment area with kid-friendly nightly programming and LEGO play areas. Also, with every overnight stay, guests will enjoy a complimentary family-style breakfast. The wreckage of a pirate ship sits directly outside the entrance of the hotel and offers guests a unique photo opportunity.

The pirates are recruiting buccaneers to join their crew with a limited time offer: buy two nights and receive one night free! Guests can book their pirate adventure today at www.legoland.com/pirate-island-hotel.

Joe Kleimanhttp://www.themedreality.com
Raised in San Diego on theme parks, zoos, and IMAX films, Joe Kleiman would expand his childhood loves into two decades as a projectionist and theater director within the giant screen industry. In addition to his work in commercial and museum operations, Joe has volunteered his time to animal husbandry at leading facilities in California and Texas and has played a leading management role for a number of performing arts companies. Joe has been News Editor and contributing author to InPark Magazine since 2011. HIs writing has also appeared in Sound & Communications, LF Examiner, Jim Hill Media, and MiceChat. His blog, ThemedReality.com takes an unconventional look at the attractions industry. Follow on twitter @themedreality Joe lives in Sacramento, California with his fiancé, two dogs, and a ghost.
Share
Facebook
Twitter
Linkedin
Email
Print
WhatsApp
Pinterest
ReddIt
Tumblr
Previous articleCleveland Metroparks Zoo Director Chris Kuhar sworn in as new Chair of AZA Board of Directors
Next articleUniversal Beijing Resort announces first two resort hotels