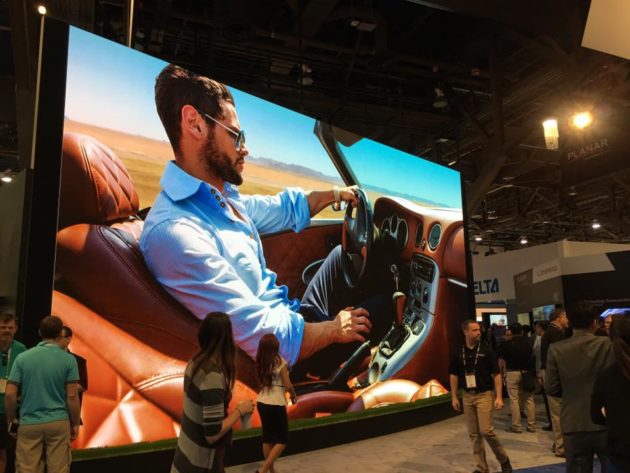 Las Vegas, NV, USA — Leyard and Planar, a Leyard company, are the recipients of seven prestigious industry technology honors at InfoComm 2016, the largest event in North America focused on the professional AV industry.

“InfoComm 2016 was an impressive presentation of the professional AV industry’s latest innovations and it’s an honor to be recognized by industry veterans,” said Jennifer Davis, chief marketing officer at Leyard. “This year’s event marks the first InfoComm that Leyard and Planar were able to showcase our groundbreaking technologies together. We are thrilled to receive recognition for both the Planar LookThru transparent display and the massive, eye-catching Leyard TWA Series 8K LED video wall that was the talk of this year’s show and the highest resolution LED video wall ever shown at InfoComm.”

The Leyard TWA Series is a family of fine pitch LED video wall displays featuring a unique design, low power consumption and outstanding image quality. Offered in a unique 54-inch flat panel format, it delivers the pixel density and form-factor similar to LCD and rear projection video walls, but with a truly seamless image that can be configured to nearly any size. Leyard and Planar showcased the Leyard TWA Series at InfoComm 2016 in an enormous 8K installation of 64 individual Leyard TWA Series 1.2 millimeter pixel pitch displays, measuring more than 31 feet wide by 18 feet tall (9.5 meters by 5.5 meters).

7thSense‘s Delta Infinity Media Server – a fully uncompressed single-box 8K 60fps media server – was used by Leyard to power the eight heads of HD at 60fps media playback – all from a single machine.

Matt Barton, CEO of 7thSense explained; “We’ve worked on huge amounts of innovation, product development and business expansion over the past twelve months. I’m delighted by the number of businesses that have chosen our products to drive their displays at Infocomm this year – it gives us an incredible opportunity to show off our range of hardware and software products in action across a broad spectrum of performance and budget specifications.”

The awards Leyard and Planar received at InfoComm 2016 recognized the companies for their leadership in developing outstanding new products that solve meaningful problems for AV integrators and technology managers. In some cases, the awards were judged by a panel of engineers and industry experts. In others, the award finalists were selected by a panel of judges, with the winners voted on by publication readers.

The seven awards that Leyard and Planar won are:

Joe Kleimanhttp://wwww.themedreality.com
Raised in San Diego on theme parks, zoos, and IMAX films, Joe Kleiman would expand his childhood loves into two decades as a projectionist and theater director within the giant screen industry. In addition to his work in commercial and museum operations, Joe has volunteered his time to animal husbandry at leading facilities in California and Texas and has played a leading management role for a number of performing arts companies. Joe has been News Editor and contributing author to InPark Magazine since 2011. HIs writing has also appeared in Sound & Communications, LF Examiner, Jim Hill Media, and MiceChat. His blog, ThemedReality.com takes an unconventional look at the attractions industry. Follow on twitter @ThemesRenewed Joe lives in Sacramento, California with his fiancé, two dogs, and a ghost.
Share
Facebook
Twitter
Linkedin
Email
Print
WhatsApp
Pinterest
ReddIt
Tumblr
Previous articleNewly Formed ThrillCorp to Issue $50 Million IPO for Developing Polercoaster and SkySpire Attractions
Next articleMediaMation Supplies MX4D Motion Seats to Cedar Fair’s Mass Effect Attraction