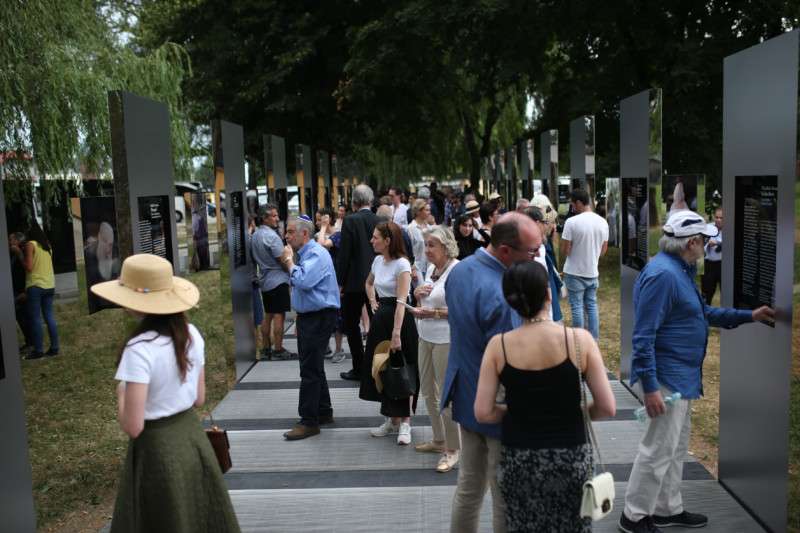 Daniel Libeskind, along with photographer Caryl Englander, and curator Henri Lustiger Thaler of the Amud Aish Memorial Museum, present a new temporary exhibition, Through the Lens of Faith. The exhibit opened at the Auschwitz-Birkenau State Museum on July 1, 2019 marking the 75th Anniversary of the liberation of the camp in 1945.

The exhibition is composed of 21 color portraits taken by Caryl Englander of Jewish, Polish, Roman Catholic and Sinti survivors of the camp. The photographs were taken over a course of three years. Caryl Englander selected her subjects from survivor networks associated with the Amud Aish Memorial Museum in Brooklyn, New York.

Englander captures her subjects intimately, in their homes, many look directly into the lens—often with their sleeve rolled up to reveal the infamous serial number that was tattooed on prisoners at Auschwitz and the sub- camps—and smiling into the camera.

“Through the Lens of Faith is a testament to the resiliency of the human spirit. Survivors imprisoned in Auschwitz-Birkenau drew on their most profound beliefs systems in the cruelest place on earth,” said curator Dr. Lustiger Thaler. “Daniel Libeskind’s design captures the past, present and future of survivor experiences and memories in conversation with Caryl Englander’s moving portraits,” added Thaler.

Three-meter-tall, vertical steel panels line up on both sides of a path that veers off the route that leads to the Auschwitz Memorial and Museum. The repetitive pattern of the panels is reminiscent of the stripes from a prisoner’s uniform, suggesting internment, while the exterior mirrored surfaces reflect the surrounding landscape and evoke a physical and spiritual freedom.

“We can’t understand the millions that were murdered in the Holocaust, but we can understand one person’s story,” said architect Daniel Libeskind. “This exhibition brings the stories of the survivors into focus, while weaving their intimate accounts into the context of the camp and contemporary life.”

As visitors enter the installation, they encounter the portraits; each one is framed in a recessed vertical panel, and overlaid with black glass etched with the words of the subject’s first-person experiential account of Auschwitz and the perseverance of their faith. Below each didactic is data on the families that was created by survivors after the Holocaust. Each captures the longing for family renewal amongst this population after the genocide. The installation is replete with visual and personal self-narrations, filling in the blank spaces of the visitor experience of Auschwitz.

“The project asks an often thought of question, but never so purposefully explored in visual and discursive terms: How did a largely religious population maintain their sense of identity and culture in a Deathworld, called Auschwitz?” said photographer Caryl Englander. “This place was structured to disarm any form of dignity and resistance. My work is a visual testament to the absolute endurance of human courage. With each person I had the privilege to meet, I felt their resilience, their hope and their joy for life.”

The exhibition is on view through October 31, 2020. According to the 2018 TEA/AECOM Museum Index, the Auschwitz-Birkenau State Museum was the 19th most visited museum in Europe last year, with 2.15 million visitors.

Joe Kleimanhttp://wwww.themedreality.com
Raised in San Diego on theme parks, zoos, and IMAX films, InPark's Senior Correspondent Joe Kleiman would expand his childhood loves into two decades as a projectionist and theater director within the giant screen industry. In addition to his work in commercial and museum operations, Joe has volunteered his time to animal husbandry at leading facilities in California and Texas and has played a leading management role for a number of performing arts companies. Joe previously served as News Editor and has remained a contributing author to InPark Magazine since 2011. HIs writing has also appeared in Sound & Communications, LF Examiner, Jim Hill Media, The Planetarian, Behind the Thrills, and MiceChat His blog, ThemedReality.com takes an unconventional look at the attractions industry. Follow on twitter @ThemesRenewed Joe lives in Sacramento, California with his wife, dog, and a ghost.
Share
Facebook
Twitter
Linkedin
Email
Print
WhatsApp
Pinterest
ReddIt
Tumblr
Previous articleCanada awards contract for national pavilion at EXPO 2020 Dubai
Next articleRyan McClure returns to St Louis’ Gateway Arch Park Foundation as its new executive director