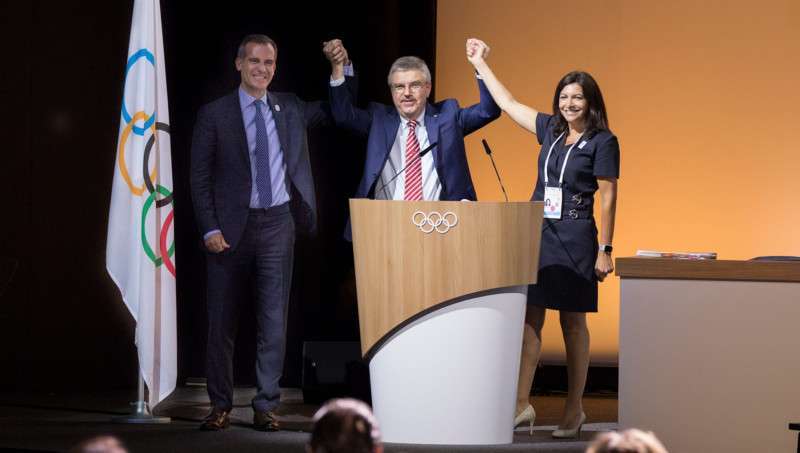 Today, the membership of the International Olympic Committee (IOC) approved the following proposal, naming both Los Angeles and Paris as host cities of future Olympic Games. It is still be determined which city will host in 2024 and which in 2028:

“Recognising the exceptional circumstances and unique opportunities presented by the candidatures of Los Angeles and Paris for the Olympic Games 2024, the International Olympic Committee takes the following decision:

1. To authorise the IOC Executive Board to conclude a tripartite agreement with Los Angeles and Paris and their respective NOCs [National Olympic Committees] for the simultaneous election of the host cities of the Olympic Games 2024 and 2028 during the 131st IOC Session in Lima;

3. Should such tripartite agreement not be concluded, the 131st IOC Session will proceed with the election of the host city 2024 in accordance with the current election procedure.”

Seconds after this decision, Los Angeles Mayor Eric Garcetti and Paris Mayor Anne Hidalgo signalled their desire to reach an agreement by making a surprise joint appearance before the Session to thank IOC members. Earlier in the day, the delegations of Los Angeles 2024, led by Mayor Garcetti, and Paris 2024, led by the President of the French Republic, Emmanuel Macron, made outstanding and emotional presentations at the 2024 Candidate City Briefing.

President Bach added that it was only the second time he had been stunned into momentary silence by good news, the first being after he was elected IOC President in 2013. 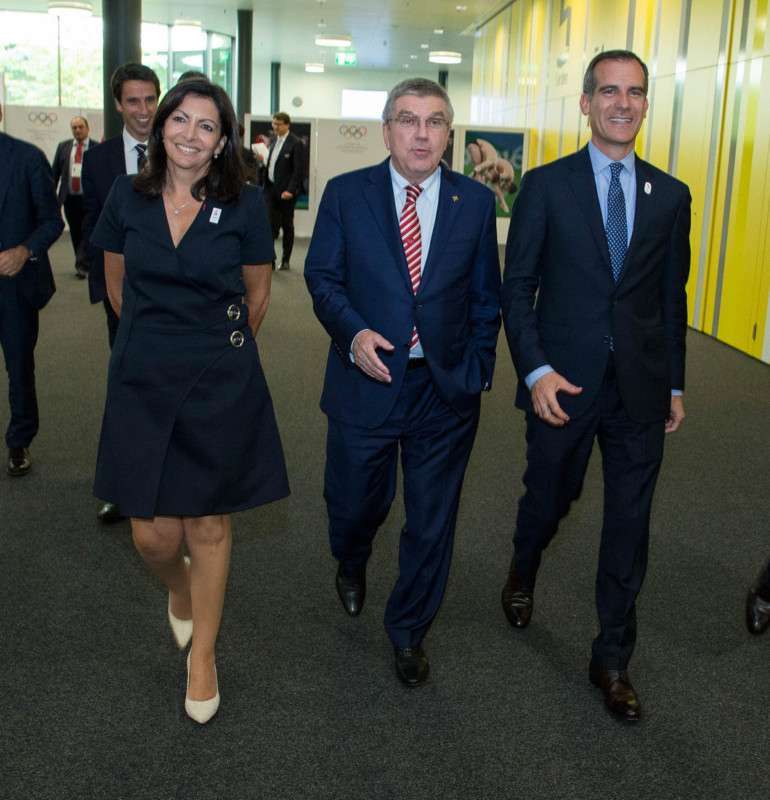 The two mayors said they were eager to start their discussions over which city would go first and expressed confidence that they can reach an agreement.

“In Olympic history there’s only been 37 times in which there has been a tie for a gold medal. Maybe today is the 38th,” Mayor Garcetti said. “For Los Angeles, it’s a golden opportunity, one that we don’t take lightly.”

Mayor Hidalgo said: “I am fully committed with the Paris team to putting all my energy, our creativity and my resolve into reaching an agreement for Paris to experience once again this Olympic adventure that it has been longing for for 100 years.”

French President Emmanuel Macron said earlier that he had signalled his support for a dual award even before the IOC formally approved the concept.

“We are ready to work with them on this ‘win-win-win’ approach,” President Macron said.

InPark has collected the Opening and Closing Ceremonies for the Olympic and Paralympic Games in Vancouver, London, Sochi, and Rio into a single playlist. Click the tab in the top left of the following window to select your video:

Joe Kleimanhttp://wwww.themedreality.com
Raised in San Diego on theme parks, zoos, and IMAX films, InPark's Senior Correspondent Joe Kleiman would expand his childhood loves into two decades as a projectionist and theater director within the giant screen industry. In addition to his work in commercial and museum operations, Joe has volunteered his time to animal husbandry at leading facilities in California and Texas and has played a leading management role for a number of performing arts companies. Joe previously served as News Editor and has remained a contributing author to InPark Magazine since 2011. HIs writing has also appeared in Sound & Communications, LF Examiner, Jim Hill Media, The Planetarian, Behind the Thrills, and MiceChat His blog, ThemedReality.com takes an unconventional look at the attractions industry. Follow on twitter @ThemesRenewed Joe lives in Sacramento, California with his wife, dog, and a ghost.
Share
Facebook
Twitter
Linkedin
Email
Print
WhatsApp
Pinterest
ReddIt
Tumblr
Previous article
Wanda Group to Sell 91% Stake in Chinese Attraction Holdings
Next article
SeaWorld Orlando Offers Guests New Opportunity to Engage With Killer Whales Up-Close