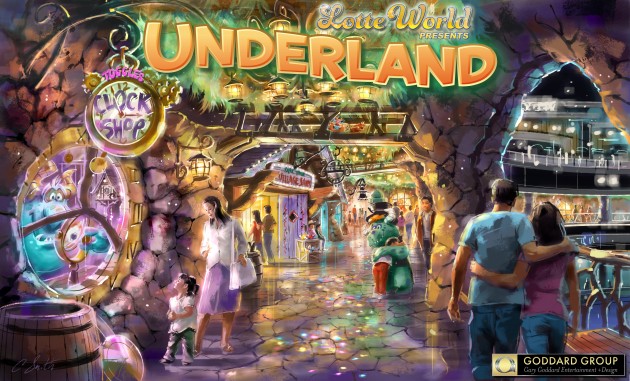 Seoul, Korea —  This spring, visitors to South Korea’s Lotte World theme park will find a whole new world to discover as UNDERLAND makes its public debut. Located in a space underneath the main theme park formerly occupied by a public mall, UNDERLAND is an all-new themed entertainment zone. Guests to the park will be immersed within this colorful new world, home to friendly ogres inspired by the popular Korean fairy tale entitled “Ogre’s Magic Club.”

“For over a decade now there’s been talk of turning the mall space into additional theme park area, but with the spike in attendance over the last year, the idea was put on the front burner” says Taylor Jeffs, Director of Design for Hollywood-based design firm and project creator, the Goddard Group. Jeffs also notes that the time period from the initial idea for UNDERLAND to its opening will have been a brief 14 months.

“The creation of Underland gave us the chance to give our guests more of what they’d been asking for, including enhanced dining options and seating capacity, as well as one of our most exciting high-tech attractions to date.” adds W.G. Choi, UNDERLAND’s producer.

Featuring an interactive XD Theatre created by Triotech, along with four new food and beverage locations, phase one of UNDERLAND increases Lotte World’s guest area by over 22,000 square feet. In addition, the fun and lovable ogres who will inhabit the land, created by famed character designer and longtime Goddard Group collaborator Phil Mendez, will significantly expand Lotte World’s overall family of mascot characters.

Ashley Choi, Lotte World Manager of Attraction Development, adds “Up to this point, no other theme park in Korea has taken advantage of our country’s rich culture of myths and legends. We see the launch of UNDERLAND as a big opportunity to build upon a popular story and characters already well ingrained within the public consciousness.”

In October 2012, the Lotte World and the Goddard Group announced a strategic creative partnership that would lead to the creation of new lands, attractions, shows, restaurants, and stores. UNDERLAND is the third project to be created under this partnership, with the JUMPING FISH family ride and DO YOU SPEAK BELUGA? interactive theatre having made successful launches in October and January, respectively.

Currently celebrating its 10th Anniversary, the Goddard Group, launched by Gary Goddard in 2002 in Los Angeles, has grown to become one of the most successful independent entertainment design firms working in the industry today, having designed and opened over two-dozen currently-operating attractions and destinations all over the globe for a variety of clients, including Universal Studios, Six Flags, Lotte, Galaxy, and Melco-Crown.

If you’ve ever been to New York’s Times Square, Las Vegas, Tokyo, Sydney, Cape Town, Jakarta, Hollywood, Shanghai or the Philippines, chances are you’ve personally experienced one of the themed entertainment attractions, hotels, resorts, aquariums, retail outlets or visitor centers designed and produced by Gary Goddard and The Goddard Group.

While best known for theme parks and attractions, Goddard and his company also specialize in a broad range of mediums, having also designed resorts, casinos, museums, and retail malls, as well as having produced Broadway shows and creating outstanding 3D/ 4D attractions.

Joe Kleimanhttp://wwww.themedreality.com
Raised in San Diego on theme parks, zoos, and IMAX films, InPark's Senior Correspondent Joe Kleiman would expand his childhood loves into two decades as a projectionist and theater director within the giant screen industry. In addition to his work in commercial and museum operations, Joe has volunteered his time to animal husbandry at leading facilities in California and Texas and has played a leading management role for a number of performing arts companies. Joe previously served as News Editor and has remained a contributing author to InPark Magazine since 2011. HIs writing has also appeared in Sound & Communications, LF Examiner, Jim Hill Media, The Planetarian, Behind the Thrills, and MiceChat His blog, ThemedReality.com takes an unconventional look at the attractions industry. Follow on twitter @ThemesRenewed Joe lives in Sacramento, California with his wife, dog, and a ghost.
Share
Facebook
Twitter
Linkedin
Email
Print
WhatsApp
Pinterest
ReddIt
Tumblr
Previous articleLEGOLAND California Resort Set to Open Themed Hotel and New Attractions in 2013
Next articleAlton Towers Gets Sheep Smiling to Promote 2013 Coaster