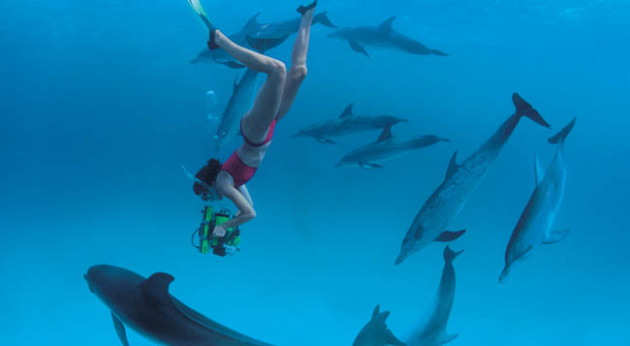 Laguna Beach, CA, USA —Marking another benchmark in MacGillivray Freeman’s long history of producing some of the most successful films for IMAX theatres, MacGillivray Freeman Films has announced that its giant-screen ocean documentary Dolphins had surpassed $100 million at the worldwide box office.  The film, which was nominated for an Academy Award for Best Documentary Short Subject, has been seen by nearly 20 million people in more than 200 IMAX and giant-screen theatres worldwide since it first debuted in 2000.

“With this new milestone, Dolphins confirms its standing as one of the most beloved films of the giant screen industry,” said Shaun MacGillivray, President of MacGillivray Freeman Films.  “Millions of people have been entertained and inspired by this underwater romp with the ocean’s most playful creatures, and we’re proud of the fact that the film is still playing in theatres today.”

“When we set out to make Dolphins more than fifteen years ago, we wanted to take audiences on a journey into the hidden world of these remarkably intelligent animals, to give viewers the sensation they were swimming right alongside them in their ocean home,” said producer/director Greg MacGillivray. “The film succeeds in giving people a new perspective on these fascinating mammals, which is why theatres continue to open the film for two, even three, repeat exhibitions.”

Other MacGillivray Freeman films to reach this notable box office milestone include To Fly!, Everest and The Living Sea.

The historic film is narrated by Pierce Brosnan. Grammy Award-winning singer/songwriter Sting composed the title song for the film, “I Love You Like a Hole in the Head,” and released an album that helped promote the film’s release. Dolphins follows a team of scientists as they travel from Patagonia to the Bahamas studying dolphin communication.  The film is produced by MacGillivray Freeman Films in association with the National Wildlife Federation with major funding provided by the National Science Foundation and Museum Film Network.

Joe Kleimanhttp://wwww.themedreality.com
Raised in San Diego on theme parks, zoos, and IMAX films, InPark's Senior Correspondent Joe Kleiman would expand his childhood loves into two decades as a projectionist and theater director within the giant screen industry. In addition to his work in commercial and museum operations, Joe has volunteered his time to animal husbandry at leading facilities in California and Texas and has played a leading management role for a number of performing arts companies. Joe previously served as News Editor and has remained a contributing author to InPark Magazine since 2011. HIs writing has also appeared in Sound & Communications, LF Examiner, Jim Hill Media, The Planetarian, Behind the Thrills, and MiceChat His blog, ThemedReality.com takes an unconventional look at the attractions industry. Follow on twitter @ThemesRenewed Joe lives in Sacramento, California with his wife, dog, and a ghost.
Share
Facebook
Twitter
Linkedin
Email
Print
WhatsApp
Pinterest
ReddIt
Tumblr
Previous articleTAA Designs New Driving School, Redesigns Hotel at Germany’s Heide Park Resort
Next articleSally Corporation Creates New Kind of Stockholm Syndrome with House of Nightmares