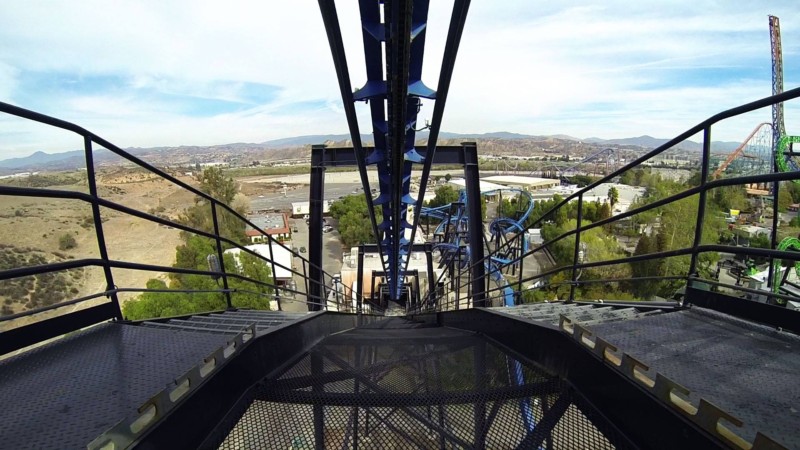 [quote]You have no idea what is coming next. This is a tremendous new experience and one guests should take advantage of quickly since it will only be available during the spring.” — Bonnie Rabjohn, Six Flags Magic Mountain park president[/quote]

Valencia, CA, USA /PRNewswire/ — For a limited time only, Six Flags Magic Mountain’s popular suspended looping coaster, BATMAN The Ride, is more intense than ever as riders dare to take on an all new experience – going backwards!

As the roller coaster climbs the 10-story lift hill, riders will take in the full scope of BATMAN The Ride‘s track as they anticipate the adventure that lies ahead. The train will reach speeds of 50 mph and travel through 2,700 feet of track, all while maneuvering hairpin turns, vertical loops, corkscrews and a zero-g roll … all while going backwards. The excitement is magnified since guests cannot see the twists and turns that await them.

“In honor of BATMAN The Ride’s 20th anniversary, we’re offering our guests an entirely different ride experience by going backwards. No matter how many times you have been on BATMAN The Ride, nothing compares to the thrill of racing down 10 stories facing the other direction,” said Bonnie Rabjohn, Six Flags Magic Mountain park president.

Celebrating its 20th anniversary on March 26, BATMAN The Ride has given close to 32 million thrilling rides and reigns as one of the most popular roller coasters in the world. BATMAN The Ride backwards opened to the public on Saturday, March 22.

Also going backwards this spring, trains on the iconic “woodie” Colossus, hit the tracks in reverse.  Covering 10 acres of land, with tracks measuring nearly a mile long at 4,325 feet, this classic wooden coaster features drops of more than 100 feet and a total of 14 hills including a climactic triple jump towards the end … backwards. Colossus celebrated its 35th anniversary in June, 2013.

Joe Kleimanhttp://wwww.themedreality.com
Raised in San Diego on theme parks, zoos, and IMAX films, InPark's Senior Correspondent Joe Kleiman would expand his childhood loves into two decades as a projectionist and theater director within the giant screen industry. In addition to his work in commercial and museum operations, Joe has volunteered his time to animal husbandry at leading facilities in California and Texas and has played a leading management role for a number of performing arts companies. Joe previously served as News Editor and has remained a contributing author to InPark Magazine since 2011. HIs writing has also appeared in Sound & Communications, LF Examiner, Jim Hill Media, The Planetarian, Behind the Thrills, and MiceChat His blog, ThemedReality.com takes an unconventional look at the attractions industry. Follow on twitter @ThemesRenewed Joe lives in Sacramento, California with his wife, dog, and a ghost.
Share
Facebook
Twitter
Linkedin
Email
Print
WhatsApp
Pinterest
ReddIt
Tumblr
Previous article
Formal Dining Room at George Washington’s Mount Vernon Estate Reinterpreted as “New Room”
Next article
New Coaster Dragonfire From Premier Rides Slated as Signature Attraction for Doha Oasis Mall