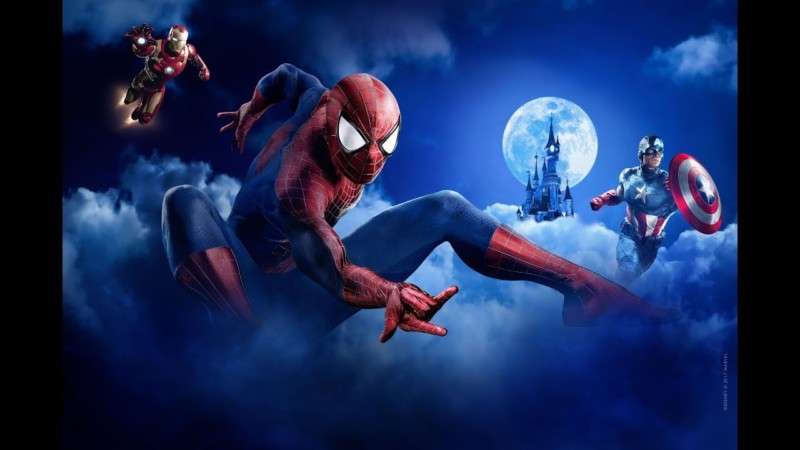 Just a few weeks after the cinema release of the highly anticipated AVENGERS: INFINITY WAR, the Marvel Super Heroes will be assembling at Disneyland Paris for the very first time. Iron Man, Captain America, Thor, Black Widow, Star-Lord, Gamora and Spider-Man will all be at Walt Disney Studios Park from June 10 for a unique season of events, shows, and interactive experiences of truly epic proportions. Guests will have the chance to join them and be part of the adventure. This unique event is the conclusion to Disneyland Paris’s 25th Anniversary celebrations.

Marvel: Super Heroes United is a full scale show at the Studio Theatre, located in the heart of Walt Disney Studios Park. The production includes live-action on-stage antics with Thor, Iron Man, Black Widow, Doctor Strange, Black Panther and Spider-Man – and other Marvel Universe characters. It also features cutting-edge special effects that will bring the Incredible Hulk and the fearsome Thanos to life – a first for Disneyland Paris. Guests will be treated to engaging projections and other big surprises.

In the show, Thanos has found a way of manipulating the Avengers and their allies in order to destroy them. Will the heroes manage to escape his clutches?

Marvel: Super Heroes United brings iconic figures from the Marvel Universe to the stage with a focus on three themes: origins, duality and unity. This 20-minute show will be performed several times a day at Walt Disney Studios Park.

Tony Stark invites guests to the open-air Production Courtyard to present the latest version of his revolutionary invention – an ‘Arc Reactor’ that generates green energy. But look out… It’s exactly the kind of event that a certain Loki loves to interrupt. Thor’s fearsome half-brother will try to use it as an opportunity for a power grab. Fortunately, Black Widow, Spider-Man and the god of thunder himself are nearby to foil his plans.

Several times a day at the foot of the Hollywood Tower Hotel, guests will have the opportunity to see this show that’s as action-packed as it is offbeat.

Guardians of the Galaxy Awesome Dance-Off

As the name suggests, guests will have the opportunity for a dance-off with the Guardians of the Galaxy. Music is a key part of Peter Quill’s character, who’s better known by the name of Star-Lord. His adventures are set to the 70s & 80s tunes of his favorite playlists. And so as you’d expect, he’s making a truly musical entrance – alongside Gamora, the most dangerous woman in the universe.

Guardians of the Galaxy Awesome Dance-Off will take place several times a day in the Production Courtyard.

The Marvel Summer of Super Heroes is also giving you the chance for a heroic handshake with the very first Avenger: Captain America. Steve Rogers himself will be at Walt Disney Studios Park to share an epic experience with guests – one they can capture forever in a photo. It’s the perfect opportunity to show friends and social media followers that they’ve met the leader of the Avengers!

The Marvel Summer of Super Heroes will also bean opportunity to discover a range of Marvel products exclusive to Disneyland® Paris A unique range of souvenir and lifestyle merchandise – including Marvel hero headbands – have been developed for the special occasion.

Joe Kleimanhttp://wwww.themedreality.com
Raised in San Diego on theme parks, zoos, and IMAX films, InPark's Senior Correspondent Joe Kleiman would expand his childhood loves into two decades as a projectionist and theater director within the giant screen industry. In addition to his work in commercial and museum operations, Joe has volunteered his time to animal husbandry at leading facilities in California and Texas and has played a leading management role for a number of performing arts companies. Joe previously served as News Editor and has remained a contributing author to InPark Magazine since 2011. HIs writing has also appeared in Sound & Communications, LF Examiner, Jim Hill Media, The Planetarian, Behind the Thrills, and MiceChat His blog, ThemedReality.com takes an unconventional look at the attractions industry. Follow on twitter @ThemesRenewed Joe lives in Sacramento, California with his wife, dog, and a ghost.
Share
Facebook
Twitter
Linkedin
Email
Print
WhatsApp
Pinterest
ReddIt
Tumblr
Previous articleWicker Man Dominates Alton Towers Spring 2018
Next articleFinal Ride on LEGOLAND Florida’s Project X Coaster Marks Start of Transformation to VR Experience