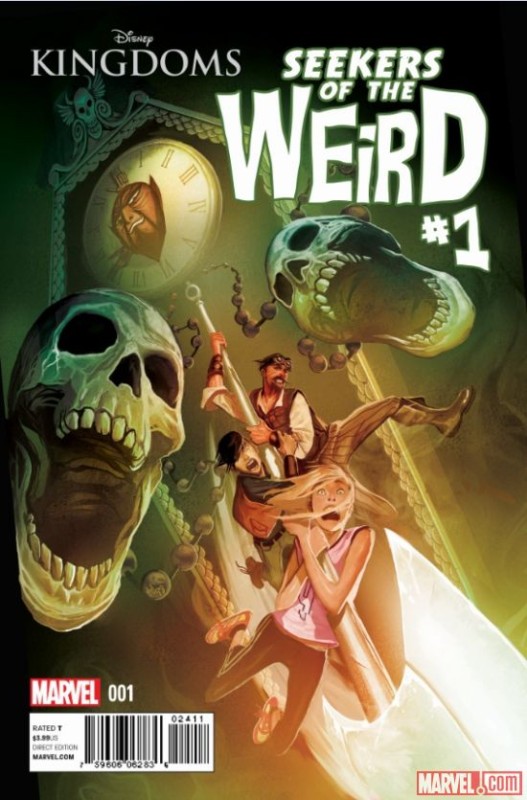 This January, experience the first all-new adventure inspired by Disney’s legendary – but never constructed – Museum of the Weird. Dreamed up by famous Imagineer Rolly Crump in 1965, the Museum of the Weird was home to a collection of mystical curiosities said to have been unearthed from all corners of the globe. Originally conceived as a spooky walk-through attraction connected to the Haunted Mansion, Crump’s innovative designs were left on the drawing board following the passing of Walt Disney….until now.

“We’re thrilled to be part of this historic launch that taps into the immense creativity of Walt Disney Imagineering to create background stories for so many beloved attractions,” said SVP of Marvel Publishing David Gabriel. “Grounded in rich Disney history, Disney Kingdoms is a great way to link Disney fans and Marvel fans!”

Written by Brandon Seifert and drawn by Karl Moline DISNEY KINGDOMS: SEEKERS OF THE WEIRD follows teens Maxwell and Melody, thrust into a thrilling race through the world’s strangest and most dangerous museum when their parents are kidnapped. Together, they must join forces with their mysterious and swashbuckling uncle as they attempt to rescue their family and save the world from an evil secret society. And they just might discover the truth behind their wild and weird destiny along the way! “Disney Kingdoms is the ultimate team-up for fans of Disney and Marvel,” said Editor Bill Rosemann. “Working hand-in-hand with the world-famous Walt Disney Imagineers, Marvel’s best and brightest creators will unleash entire worlds inspired by and built around the attractions and characters that you’ve always known—but will experience for the very first time!”

What terrifying secrets lie inside the mysterious Museum of the Weird? Find out this January as the harrowing journey begins in DISNEY KINGDOMS: SEEKERS OF THE WEIRD #1.

Joe Kleimanhttp://wwww.themedreality.com
Raised in San Diego on theme parks, zoos, and IMAX films, InPark's Senior Correspondent Joe Kleiman would expand his childhood loves into two decades as a projectionist and theater director within the giant screen industry. In addition to his work in commercial and museum operations, Joe has volunteered his time to animal husbandry at leading facilities in California and Texas and has played a leading management role for a number of performing arts companies. Joe previously served as News Editor and has remained a contributing author to InPark Magazine since 2011. HIs writing has also appeared in Sound & Communications, LF Examiner, Jim Hill Media, The Planetarian, Behind the Thrills, and MiceChat His blog, ThemedReality.com takes an unconventional look at the attractions industry. Follow on twitter @ThemesRenewed Joe lives in Sacramento, California with his wife, dog, and a ghost.
Share
Facebook
Twitter
Linkedin
Email
Print
WhatsApp
Pinterest
ReddIt
Tumblr
Previous article
Central Florida’s 2014 Attractions Reach Milestones
Next article
Zamperla Unveils Plans to Build $110 Million Leisure and Cultural Park in Venice