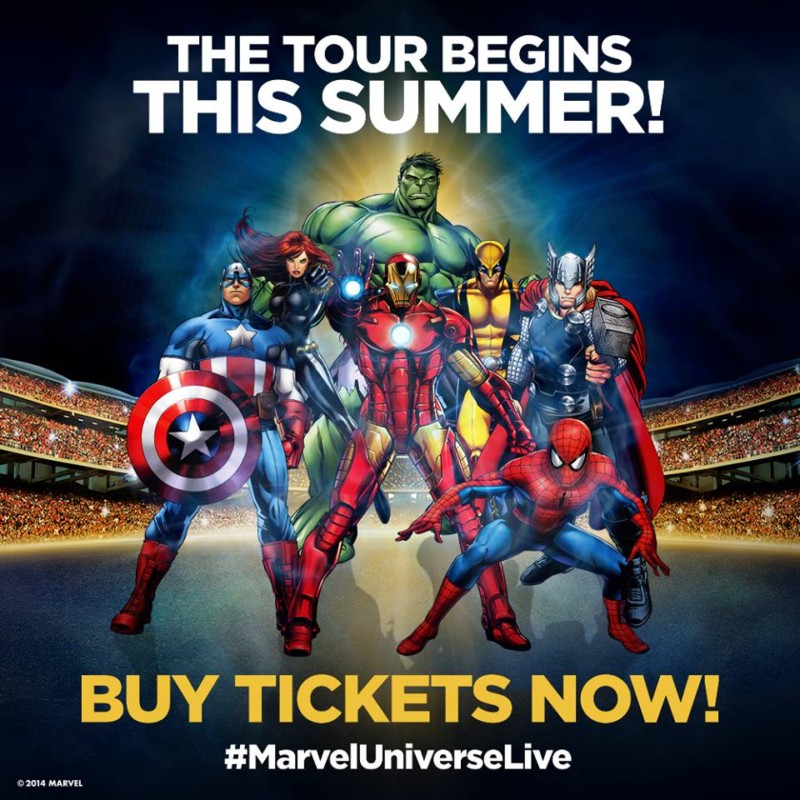 [quote]We are working hand in hand with Marvel to give fans a revolutionary live show experience that introduces an original story that is faithful to the Marvel canon and utterly captivating from beginning to end! — Juliette Feld[/quote]Ellenton, FL, USA — After much anticipation, Feld Entertainment, Inc., the world’s leading producer of touring live family entertainment, today revealed details about the most ambitious live show in its history, with new information about the epic storyline and tour dates for Marvel Universe LIVE! Featuring the most Marvel characters ever assembled in one production, this high-caliber arena spectacular will put fans right in the middle of one of the most electrifying battles between good and evil ever conceived. Produced by Feld Entertainment, this first-ever live Marvel tour makes its 85-city debut in July in Tampa, FL, followed by the world premiere at New York City’s Barclays Center on Wednesday, August 13. The first leg of its North American tour will feature stops in Washington D.C., Philadelphia, Nashville, Miami and Atlanta, among many others.  Tickets for Marvel Universe LIVE! are on sale now.

Marvel Universe LIVE! will captivate audiences with an authentic and original story that brings more than 25 Marvel characters together on one epic quest.  The story is framed around the battle over the Cosmic Cube, the source of ultimate power and one of the most feared and coveted treasures in the Marvel Universe, that has been shattered into pieces by the Mighty Thor in order to prevent it from falling into the wrong hands. With the pieces scattered across the globe, Thor’s villainous brother Loki devises a scheme to clone its powers, inciting a threat that could not only decimate Earth but also obliterate the Universe.

To defeat Loki, Marvel’s biggest Super Heroes must band together, including The Avengers – Iron Man, Captain America, Hulk and Thor along with Spider-Man and Wolverine, must trek across the globe to retrieve the Cosmic Cube fragments and unite them. As the Super Heroes track the Cube, they will encounter some of their biggest adversaries including Green Goblin, Doctor Octopus, Red Skull, Madame Hydra, Aldrich Killian, Electro and more, in the quest for the very same fragments. These foes have no problem teaming up if it gets them closer to their ultimate goal of world domination.

“Marvel Universe LIVE! will be the most remarkable live event that the world has ever seen with an absolutely epic story line and jaw dropping technological advances. Fans will feel like they’ve stepped into a Marvel blockbuster film come to life with nonstop movie style action and stunts,” said Feld Entertainment Executive Vice President and Marvel Universe LIVE! Producer Juliette Feld.

“To see all the elements of this spectacular live show come together has been truly incredible,” said Marvel’s Chief Creative Officer Joe Quesada. “The technology utilized in the show is not only going to blow your mind, it is going to take you to a whole new Marvel world like nothing fans have ever seen before. What Feld Entertainment has done is going to astonish and amaze fans.”

Marvel Universe LIVE! launches new innovations in set design, aerial stunts, pyrotechnics and state-of-the-art show elements that bring movie style special effects to the live entertainment arena.  Audiences will see the awe-inspiring world of Super Heroes come to life before their eyes with a dynamic cast comprised of some of the industry’s most talented stunt performers. Utilizing their talents and aided by a unique combination of never before seen arena mechanics some of Marvel’s mightiest will come to life with profound results. These true-to-comic creations will be supported by innovative lighting design and transformative 3D projection that will take the audience on a journey around the globe with these timeless characters. To support this massive undertaking, Marvel Universe LIVE! will not only utilize the entire arena floor, but also perform within a multilevel aerial space creating a unique experience that puts audiences right in the middle of the action in ways they could only dream about prior.

Joe Kleimanhttp://wwww.themedreality.com
Raised in San Diego on theme parks, zoos, and IMAX films, InPark's Senior Correspondent Joe Kleiman would expand his childhood loves into two decades as a projectionist and theater director within the giant screen industry. In addition to his work in commercial and museum operations, Joe has volunteered his time to animal husbandry at leading facilities in California and Texas and has played a leading management role for a number of performing arts companies. Joe previously served as News Editor and has remained a contributing author to InPark Magazine since 2011. HIs writing has also appeared in Sound & Communications, LF Examiner, Jim Hill Media, The Planetarian, Behind the Thrills, and MiceChat His blog, ThemedReality.com takes an unconventional look at the attractions industry. Follow on twitter @ThemesRenewed Joe lives in Sacramento, California with his wife, dog, and a ghost.
Share
Facebook
Twitter
Linkedin
Email
Print
WhatsApp
Pinterest
ReddIt
Tumblr
Previous article
Gaylord Rockies to Include Indoor and Outdoor Waterpark
Next article
VIDEO: Seven Dwarfs Mine Train