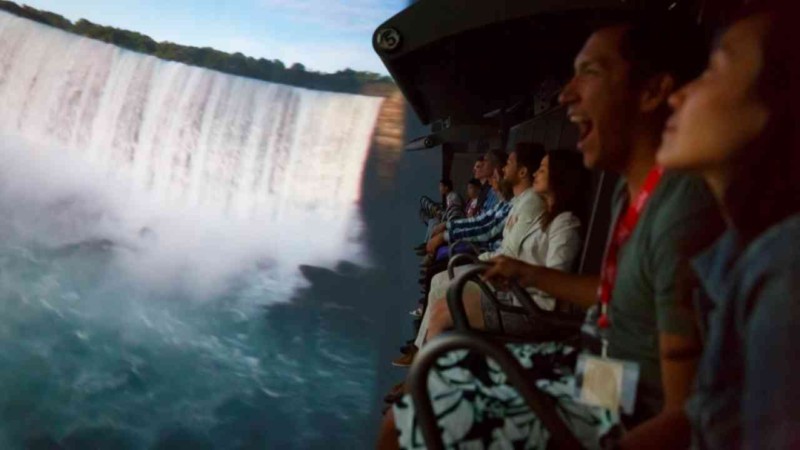 Miami, FL, USA and Kitchener, ON, Canada — Tourists and locals are flocking to Vancouver’s latest must-see attraction, FlyOver Canada, which takes visitors on a spectacular virtual flight across some of Canada’s most spectacular scenery. Opened in the summer of 2013 at a cost of $20 million, FlyOver Canada is located in the former IMAX theatre at Canada Place pier in the heart of downtown Vancouver.

The experience begins with a pre-show called Uplift, produced by Moment Factory of Montreal, using eight Christie DWU675-E 1-chip DLP projectors. Groups of up to 61 guests are brought into a 360 degree immersive multimedia show that gives context and sets the stage for the main virtual flight ride.  “As we built up the company we started talking to Christie about various aspects of this project. Moment Factory then specified Christie for the preshow projectors so that got us hooked up with the(Christie) DWU670-E projectors,” said Eric Sambell, director, construction &technology, Soaring Attractions.

After Uplift, visitors enter the main theatre where they strap into their seats and are raised in front of a 20 meter hemispherical domed screen to experience an awesome flight from east to west across Canada.  The flight includes iconic sights such as Niagara Falls and the CN Tower, but also some more hidden gems from the farther reaches of the country.  FlyOver Canada features an original score composed by Calgary’s Six Degrees Music. In addition to the stunning imagery and score, the seats move in sync with the visuals and special effects such as wind, mist, and scents, round out the immersive experience, making the audience feel as if they are truly riding on the wind.

Eric Sambell, Director, Construction and Technology for Soaring Attractions, says the main challenge they faced in design was that they “needed to integrate many different devices to run automatically and maintain synchronization between the ride and the rest of the building.” He continues, “we were faced with a variety of different devices which needed to be precisely timed. We also needed the system to be able to react to delays in loading the ride and adjust timing throughout the building.”

Guests encounter a thrilling immersive experience including the jagged peaks of the Canadian Rockies, cosmopolitan cities, the rugged East Coast and more via the Christie D4K3560 3-chip DLP projector and images produced by Sherpas Cinema.

“After considerable research by the technical and creative team at Soaring Attractions, the owner/operator of Fly Over Canada concluded that Christie was also the clear 4K projector choice for the main ride.

“We chose the Christie D4K3560 projector solution because we needed the brightness and intensity to light a 19-meter diameter surface area. Obviously we needed the brightest projector and as much resolution as we could get,” continued Sambell. “That meant a 4K solution but because it’s a motion ride we needed 60 hertz to avoid motion blur – which led us to the D4K3560.”

The Christie D4K3560 projector is part of the Christie TruLife electronics platform offering customers superior image and video quality for the most comfortable and realistic viewing experience.

“The projector sits out on a perch, which made it a bit of challenge but the installation went smoothly and Christie made sure everything was perfect; they came through with everything right when we needed it. Everyone, from the Christie field application engineers to Geoff Chick(central and western regional sales manager, Canada), really stepped up and made things right.”

The show opened last summer and, according to Sambell, ran at capacity on weekends and well-exceeded expectations in the months that followed. He said people have returned up to ten times and the reaction from people of all ages has been overwhelmingly positive.

FlyOver Canada opened in the summer of 2013 and in early 2014 hosted a limited engagement of a double feature with the show “Flight of the Dragon” which soars over China.

Soaring Attractions is the owner and operator of FlyOver Canada in Vancouver, BC. It was founded in 2011 by Stephen Geddes and Andrew Strang. FlyOver Canada opened in June 2013 and operates 7 days a week, 364 days per year.

Joe Kleimanhttp://wwww.themedreality.com
Raised in San Diego on theme parks, zoos, and IMAX films, InPark's Senior Correspondent Joe Kleiman would expand his childhood loves into two decades as a projectionist and theater director within the giant screen industry. In addition to his work in commercial and museum operations, Joe has volunteered his time to animal husbandry at leading facilities in California and Texas and has played a leading management role for a number of performing arts companies. Joe previously served as News Editor and has remained a contributing author to InPark Magazine since 2011. HIs writing has also appeared in Sound & Communications, LF Examiner, Jim Hill Media, The Planetarian, Behind the Thrills, and MiceChat His blog, ThemedReality.com takes an unconventional look at the attractions industry. Follow on twitter @ThemesRenewed Joe lives in Sacramento, California with his wife, dog, and a ghost.
Share
Facebook
Twitter
Linkedin
Email
Print
WhatsApp
Pinterest
ReddIt
Tumblr
Previous articleJack Rouse Associates Develops Singapore’s KidsSTOP Interactive Children’s Science Museum
Next articleThe Producers Group Provides Expertise to the Creation of Four Major Attractions at Chimelong Ocean Kingdom