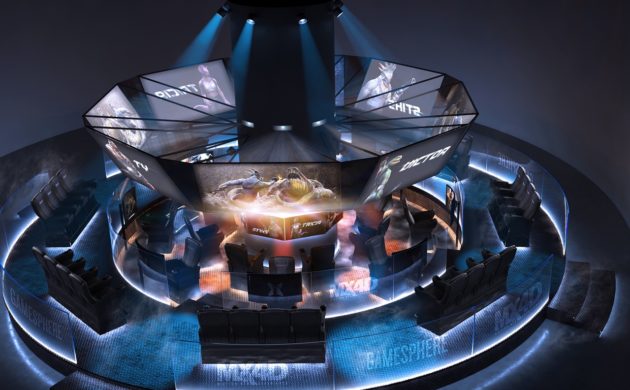 According to MMI VP/CTO Dan Jamele, MMI is “venturing into the next level of immersive action in game play and spectatorship in eSports. By combining traditional cinema screens, monitors, or VR headsets with full motion, immersive MX4D® seats, we are creating a new paradigm in realism that is unmatched.  We see the future of this technology to be spectacular in terms of generating new revenue streams for cinemas, theme parks, and other entertainment venues.”

MMI, which contributed key technology to the Santa Clara theme park attraction, excerpted a few minutes of heart-pounding visuals from the ride, then expertly integrated its signature motion effects MX4D® seats and software to create a “whole new animal” — i.e. a VR experience that showcases the massive potential of adding 4D interactive elements to VR.  In the mini “demo theatre” at MMI’s booth at the E3 show, visitors sat in the same MX4D® Motion EFX seats contained in the actual attraction, but donned VR headsets for a 3D, 360º tour and sneak peek of the experience. These spectators were then be taken on a wild, interactive adventure as their seats moved and reacted to scenes from “Mass Effect: New Earth” action in the VR headset.

Drilling deeper into melding 4D Motion with the super-hot eSports trend, MMI unveiled its concept for a visually arresting “GameSphere” attraction utilizing a circular arena type floor plan featuring a high-tech central gaming area for players on the inside, with viewing sections for spectators on the outside. GameSphere’s arena is outfitted with MMI’s proprietary MX4D® immersive technology, replete with pitch, roll, and heave motion seats, as well as special effects include fog, water/air blasts, seat pokers, neck ticklers, scents and more.

States MMI Director of Sales and Marketing, Shawn Forgaard:  “GameSphere offers a new, social, high tech competitive gaming experience that not only engages the players, but immerses the spectators in all of the action as well. It’s perfect for malls, casinos, Family Entertainment Centers, cruise ships, and more.  We are very excited about all the possibilities GameSphere has to offer to our clients.”

MediaMation also debuted its new Arena eSports division at E3. Building on the same real-time physics engine developed for its  REACTIVr™, MediaMation is currently adapting its popular MX4D® theatres to host totally immersive eSports competitions.  With hundreds of full motion MX4D® theatres installed worldwide in some of the most popular cinema locations, this is a natural progression and provides an unparalleled experience for audiences  as well as a highly sought-after alternative use for cinema owners.  As each theatre is already full equipped with state-of-the-art 3D projection, sound, 4D effects and MX4D® Motion EFX seats, adding real time eSports action provides a new paradigm for attracting both players and fans and generating revenue for these theatres.

Inside the theatre, each viewer can choose to align with one of the eSports players competing at the front of the theatre and immerse themselves into the action and effects of the game.

According to Jamele:  “These theatres already exist and more are being built every month.  Cinemas are located in prime areas with plenty of parking, concessions, staff, and infrastructure already in place making them the perfect venue to hold these eSports competitions. As their popularity grows, plans are in place to further enhance their utilization by networking multiple theatres together for regional and national competitions as well.”

Housed in an ATV-themed vehicle for demo purposes, MediaMation’s proprietary REACTIVr™ technology and  real-time physics engine offer the first of its kind, multi-player interactive Virtual Reality full motion experience.  This innovative technology elevates the user’s experience to a new level by allowing the ATV driver to travel anywhere throughout the arena while the passenger operates the various “guns.”  Driver and shooter work together trying to score the most points by knocking opponents out of the target area and pass through as many scoring targets as possible. The ATV realistically reacts to bumps, hazards, terrain, and other motion and effects game elements in real-time as opposed to running a pre-set program.  Geared towards all ages, the fun, simple and realistic “game play” will allow multiple two-player units to challenge each other on the playing field for more than a simple “shooting gallery” experience.

This networked, VR-based MediaMation branded  MX4D® adventure utilizes actual physics data gleaned from on-screen scenarios (driving on gravel, barreling over hills, motoring through water puddles, etc.) to create a highly-immersive interactive gaming experience with the expected Virtual Reality 360º degree vantage point for each player.  In short, MMI’s physics engine reacts to the game as it progresses, and applies the appropriate simulated response, providing riders with an accurate sense of motion and overall realism.  Each vehicle has an integrated motion platform (pitch, roll, and heave) along with other MX4D® effects all tied to the in-game action — air and water blasts, wind, scents, neck ticklers, and more.

The REACTIVr™ unit is offered in either a vehicle themed, or two-seat MX4D® “themable pod, with the capability of up to four units networked for competition. MediaMation anticipates further upgrades and enhancements to this next-generation technology.

Joe Kleimanhttp://wwww.themedreality.com
Raised in San Diego on theme parks, zoos, and IMAX films, Joe Kleiman would expand his childhood loves into two decades as a projectionist and theater director within the giant screen industry. In addition to his work in commercial and museum operations, Joe has volunteered his time to animal husbandry at leading facilities in California and Texas and has played a leading management role for a number of performing arts companies. Joe has been News Editor and contributing author to InPark Magazine since 2011. HIs writing has also appeared in Sound & Communications, LF Examiner, Jim Hill Media, and MiceChat. His blog, ThemedReality.com takes an unconventional look at the attractions industry. Follow on twitter @ThemesRenewed Joe lives in Sacramento, California with his fiancé, two dogs, and a ghost.
Share
Facebook
Twitter
Linkedin
Email
Print
WhatsApp
Pinterest
ReddIt
Tumblr
Previous articleDNP Imagingcomm America Corporation Provides Photo Printing Solutions for Attractions Industry
Next articleProtec Designs Creative Presentations for Trade Shows to Showcase Services