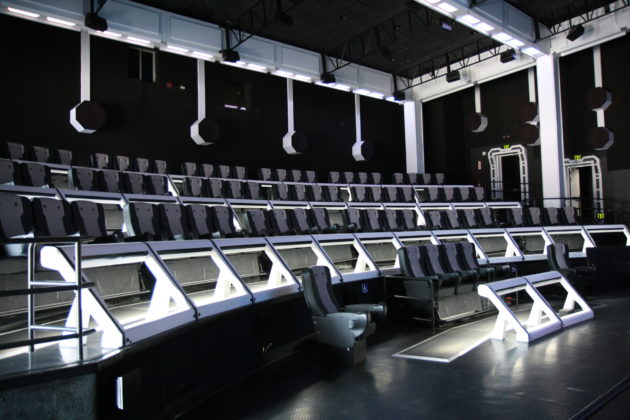 The next-generation, 4D holographic ride spotlights MediaMation’s signature MX4D® motion seats, which have been widely adopted by major theme park operators as well as in cinema chains throughout the globe.

The attraction features “immersive” special effects cued to sounds and visuals in the theatre such as water/air blasts, seat/neck ticklers, back pokers, scents, and other effects emanating from MMI’s patented individual seat armrests.  The installation also marks the first integration of “sensory mats,” a new safety feature that signals a row of seats to stop motion should a rider jump off his/her seat while the seats are moving.

Notes Christian Dieckmann, Corporate VP, Strategic Growth, Cedar Fair, regarding the company’s choice of MediaMation technology for this project: “We knew we needed a state-of-the-art motion system to complement the massive 3D LED screens and deepen the immersive aspect of the experience.  After looking at a number of options, we chose MediaMation and their MX4D® Motion EFX seats.  In addition to having a fantastic range and intensity of motion, their seats came ready-made with other 4D effects such as water, wind, smell and ticklers.  The installation and programming process was also very straightforward, which was a huge benefit on a complicated project like this that integrated so many different technologies for the first time.”

Adds Dan Jamele, MMI VP/CTO:  “Obviously, MediaMation is thrilled to be a part of this new attraction at California’s Great America.  We fully expect it to draw big crowds and create lots of repeat riders for the experience.”

Joe Kleimanhttp://wwww.themedreality.com
Raised in San Diego on theme parks, zoos, and IMAX films, InPark's Senior Correspondent Joe Kleiman would expand his childhood loves into two decades as a projectionist and theater director within the giant screen industry. In addition to his work in commercial and museum operations, Joe has volunteered his time to animal husbandry at leading facilities in California and Texas and has played a leading management role for a number of performing arts companies. Joe previously served as News Editor and has remained a contributing author to InPark Magazine since 2011. HIs writing has also appeared in Sound & Communications, LF Examiner, Jim Hill Media, The Planetarian, Behind the Thrills, and MiceChat His blog, ThemedReality.com takes an unconventional look at the attractions industry. Follow on twitter @ThemesRenewed Joe lives in Sacramento, California with his wife, dog, and a ghost.
Share
Facebook
Twitter
Linkedin
Email
Print
WhatsApp
Pinterest
ReddIt
Tumblr
Previous article
Leyard and Planar Receive Seven Awards at InfoComm 2016; 8K Video Wall Powered by Single 7thSense Server
Next article
InPark goes to InfoComm – Part 1