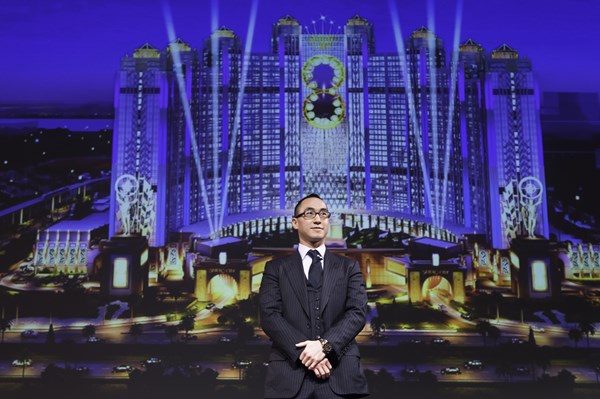 Studio City will encompass the pinnacle of international and Asian leisure-destination inspired entertainment, supported and endorsed by icons of Hollywood’s entertainment industry.

In a world first, a sneak peek of a tantalizing new film trailer promoting “The Audition” — a special short-movie set around a Studio City storyline which marks the very first time Leonardo DiCaprio, Robert De Niro and Brad Pitt have all starred together under the direction of Academy Award-winning film director, Martin Scorsese — was provided at today’s unveiling event in Macau, China. The movie was produced by acclaimed Hollywood producer, RatPac Entertainment’s Brett Ratner, the director of movie blockbusters, “Red Dragon”, ”X-Men: The Last Stand”, “Hercules” and the “Rush Hour” film franchise.

Mr. Brett Ratner said: “This short film is a historic event because it is the first film ever to star such legendary actors as Robert De Niro, Leonardo Dicaprio and Brad Pitt in one film together. Mr. Lawrence Ho and Mr. James Packer served as Executive Producers and convinced iconic filmmaker Martin Scorsese to direct the film whom I was thrilled to have the opportunity to collaborate with. The cooperation between Mr. Scorsese and the Melco Crown Entertainment brand is synergistic because of the fact that Mr. Scorsese directed the film “Casino” starring Robert DeNiro. Mr. Scorsese has collaborated with Mr. DeNiro on 8 films and with Mr. DiCaprio on 5 films and is working with Mr. Pitt for the first time. Our hope is that the trailer for “The Audition” gives audiences an early look into what will surely be an important cinematic experience directed by one of the most culturally influential directors in the history of Hollywood films. I look forward to the Global Premiere of the film at the launch of Studio City in mid-2015.”

Set against a backdrop of Art Deco-inspired architecture, Studio City will deliver movie-star treatment to all its visitors, with the most diverse collection of entertainment offerings ever seen in Macau; a glamorous two-tower hotel; and highly sophisticated and immersive shopping and dining experiences.

“It will take the entertainment-inspired leisure destination concept to new levels, in a cinematic setting developed in partnership with the world’s leading entertainment brands, supported and endorsed by many of the legends of Hollywood – including this very special short-film collaboration with Brett Ratner, Martin Scorsese, and superstars Leonardo DiCaprio, Robert De Niro and Brad Pitt.”

Melco Crown Entertainment also announced a partnership to bring the unrivalled portfolio of many of the most iconic DC Comics’ Super Heroes and Warner Bros.’ classic characters to life, in collaboration with Warner Bros. and DC Entertainment.

“We are also thrilled to announce a collaboration to bring the unrivaled portfolio of some of the most iconic DC Comics’ Super Heroes and Warner Bros.’ classic characters to life, together with Warner Bros. and DC Entertainment. We are excited to introduce Macau to the exhilarating Batman Dark Flight, a virtual-reality ride that will allow fans of the Caped Crusader to soar over Gotham City, and we look forward to unveiling the Warner Bros. Family Entertainment Center, where families and children can play among many of their favorite characters,” said Mr. Ho.

When completed later in 2015, Studio City’s towering facade will feature a new, iconic, Macau landmark – the Golden Eye – which at 130 meters will be Asia’s highest Ferris wheel. It is inspired by having two asteroids shooting through a Gotham City building. 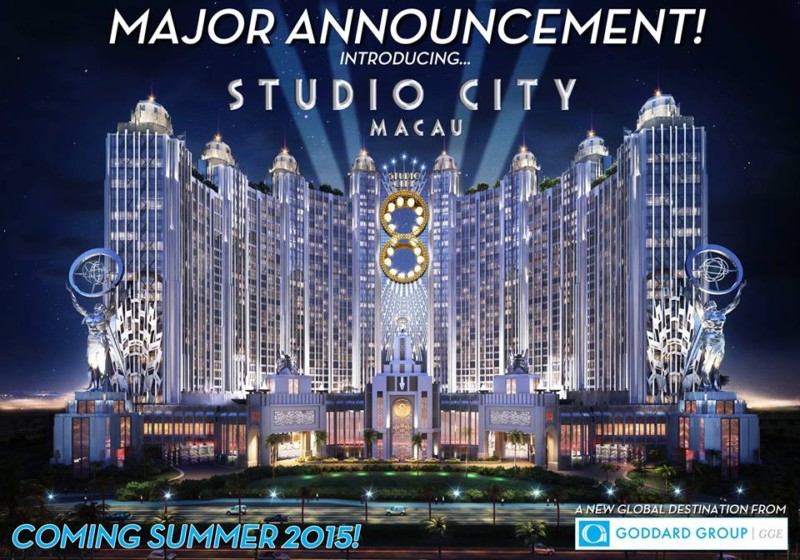 Studio City is designed to be the most diversified entertainment resort offering in Macau, with more world-class entertainment amenities than any integrated resort in the market. It will represent the pinnacle of entertainment-driven leisure destination experiences in Asia.

The world’s first Batman film franchise digital ride, DC Comics’ Batman Dark Flight, delivers visitors an exhilarating adventure through the night, in an action-packed motion ride, providing thrill-seekers with a virtual reality Batman experience. Fly through Gotham City, following Batman around the city as he brings some of the most notable Super-Villains from his Rogue’s Gallery to justice.

Kevin Tsujihara, Chairman and CEO, Warner Bros. commented, “The Warner Bros. and DC Comics portfolio of properties offers a unique and engaging experience for fans of all ages. We are delighted to collaborate with Melco Crown Entertainment to bring these characters to a world-class project like Macau’s Studio City.”

Mr. Franz Harary said: “My magic has taken me around the planet introducing me to the world’s greatest illusionists. Today, I am proud to bring those incredible wizards to Macau, showcasing their art in a place designed to let their magic shine! Welcome, to the House of Magic at Studio City—sure to become the premier performance venue for magicians globally!”

Visitors can dine like the stars, with a diverse array of gourmet experiences across a range of exciting restaurants and bars to suit every taste. Studio City offers an eclectic collection of over 30 outlets comprising the very best of Asian and international fine-dining, together with cafe, lounge and casual eatery options.

The Boulevard at Studio City will bring the world’s best retail experiences to life in Macau. Showcased in a movie-studio environment, seamlessly transporting guests from an upscale arcade to high energy lifelike streetscapes, shoppers will be entertained at every turn. Luxurious fashion, unique timepieces and chic accessories will tempt customers as they stroll the 300,000 sq. foot mall.

The sophisticated and glamourous mix of the hottest fashion labels in the world today has been handpicked to delight Studio City’s discerning, fashion-conscious shopper.

Merchandised and managed by Taubman Asia, The Boulevard at Studio City will be Macau’s shopping hot spot.

Studio City, along with its sister property, the highly-successful City of Dreams Macau, represents the next phase in Melco Crown Entertainment’s ongoing strategic mission to aggregate, develop and deliver world-leading, highly innovative entertainment brands catering to the rapidly growing leisure and entertainment demands of enthusiastic leisure destination travelers, both regionally and internationally, seeking unique and ever more exciting travel experiences.

Joe Kleimanhttp://wwww.themedreality.com
Raised in San Diego on theme parks, zoos, and IMAX films, InPark's Senior Correspondent Joe Kleiman would expand his childhood loves into two decades as a projectionist and theater director within the giant screen industry. In addition to his work in commercial and museum operations, Joe has volunteered his time to animal husbandry at leading facilities in California and Texas and has played a leading management role for a number of performing arts companies. Joe previously served as News Editor and has remained a contributing author to InPark Magazine since 2011. HIs writing has also appeared in Sound & Communications, LF Examiner, Jim Hill Media, The Planetarian, Behind the Thrills, and MiceChat His blog, ThemedReality.com takes an unconventional look at the attractions industry. Follow on twitter @ThemesRenewed Joe lives in Sacramento, California with his wife, dog, and a ghost.
Share
Facebook
Twitter
Linkedin
Email
Print
WhatsApp
Pinterest
ReddIt
Tumblr
Previous articleVIDEO: Falcon’s Treehouse Paints the Ceiling at Chimelong Ocean Kingdom
Next articleGiant Screen Veteran Jennifer Lee Hackett Joins nWave as Director of Sales and Distribution, Americas