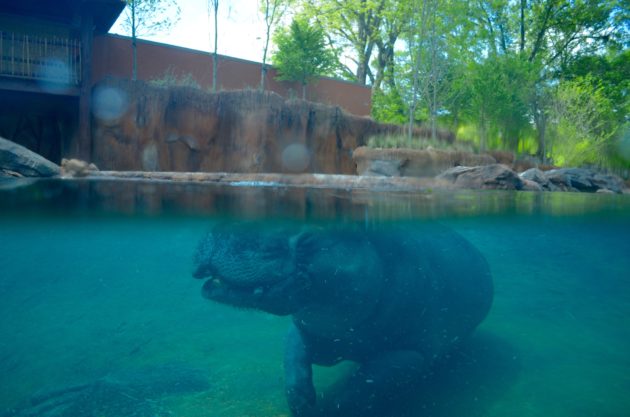 Memphis, TN, USA — Memphis Zoo is excited to announce its world-class Zambezi River Hippo Camp exhibit opened to the public Friday, April 29 with a special ribbon-cutting ceremony. Zambezi is the first major exhibit to open since Teton Trek in 2009. Once known as the “Hippo Capital of the World,” Zambezi is the culmination of the Zoo’s long history with hippos spanning more than 100 years.

“This is the most ambitious exhibit we’ve constructed to date – in terms of both the architecture and animals curated,” said Matt Thompson, director of animal programs at Memphis Zoo. “The Zambezi River Valley is a lesser-known, but extremely important part of the world. We can’t wait for visitors to learn about this area through a cultural experience like never before. Besides our new and rare animals, there will also be interactive stations throughout the exhibit for both children and adults to enjoy. It’s been a long time coming, and we are excited to finally show it off!”

The 4-acre exhibit is a tribute to the animals, culture and architecture of the Zambezi River Valley in Africa featuring hippos and Nile crocodiles with spectacular viewing areas that bring you up-close and personal with the animals. There are three hippos, including one new male hippo from Disney’s Animal Kingdom (“Uzazi”) and two females from the Memphis Zoo (“Binti” and “Splish”). Joining them in Zambezi are four Nile crocodiles – three females and one male – that arrived from South Africa via FedEx. Ranging in size from 12 to 14 feet, these crocodiles are among the largest of their kind in North America. Both exhibits include underwater viewing areas. The hippo area contains 200,000 gallons of water, all of which can be purified in an hour thanks to a state-of-the- art, custom-built filtration system.

The Zambezi exhibit is also home to other rare animals such as okapi, nyala antelope and patas monkeys, as well as yellow-backed duikers, lesser flamingos and cape vultures. Other African birds are featured in a free-flight aviary.

To highlight the culture of the Zambezi River Valley, there are cultural touches adorning the exhibit such as dugout canoes, a safari vehicle, tribal drums and decorative masks. The exhibit also pays homage to the African coffee trade, with a coffee farm themed exhibit. The exhibit also features three rondavels, or round houses. The largest rondavel is available as rental space for weddings, corporate functions and other events, and features underwater viewing areas for both the hippos and crocodiles.

The Zoo worked with local and regional partners to combine state-of-the-art animal facilities and technology to ensure the ultimate cultural experience for visitors. Zambezi was designed by Torre Design Consortium, Ltd. (the architects behind Cat Country, Primate Canyon, CHINA, Northwest Passage and Teton Trek) and built by Zellner Construction Company. Engineering services were provided by A2H. Speak Creative designed the microsite, iBeacon program and app for the exhibit.

Joe Kleimanhttp://wwww.themedreality.com
Raised in San Diego on theme parks, zoos, and IMAX films, InPark's Senior Correspondent Joe Kleiman would expand his childhood loves into two decades as a projectionist and theater director within the giant screen industry. In addition to his work in commercial and museum operations, Joe has volunteered his time to animal husbandry at leading facilities in California and Texas and has played a leading management role for a number of performing arts companies. Joe previously served as News Editor and has remained a contributing author to InPark Magazine since 2011. HIs writing has also appeared in Sound & Communications, LF Examiner, Jim Hill Media, The Planetarian, Behind the Thrills, and MiceChat His blog, ThemedReality.com takes an unconventional look at the attractions industry. Follow on twitter @ThemesRenewed Joe lives in Sacramento, California with his wife, dog, and a ghost.
Share
Facebook
Twitter
Linkedin
Email
Print
WhatsApp
Pinterest
ReddIt
Tumblr
Previous articlePHOTOS: Memphis Zoo’s Zambezi River Hippo Camp
Next articleHershey’s Chocolate Tour to Celebrate Grand Re-Opening on May 14 With New Technology and New Cows