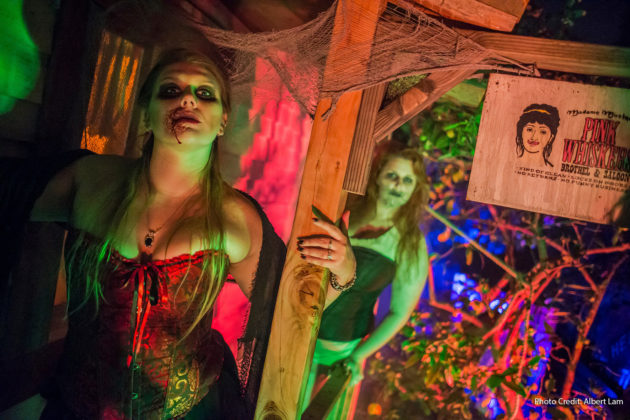 Los Angeles, CA, USA — One of the most exciting and unique components of Midsummer Scream – California’s premier Halloween, haunt and horror festival – will be its Hall of Shadows dark zone, featuring roaming monsters, entertainment, and 9 terrifying mini haunted attraction experiences.

Hall of Shadows will occupy more than one third of the Halloween festival’s 90,000 square-foot show floor this year, giving thousands of fans the opportunity to preview home and professional haunts each day, included with their admission to Midsummer Scream. In addition to the haunted attractions, those brave enough to venture into Hall of Shadows will experience a full-blown scare zone, Toxicity, high-energy performances by the Decayed Brigade slider team three times each day, and many terrifying monsters lurking in the fog.

Created by Larry Bones and his crew at Bone Yard Effects, Toxicity is an immersive experience set within the walls of a genetics lab that has suffered a toxic explosion which will leave guests screaming as they are attacked by twisted, mutated scientists from all sides. Bone Yard Effects creates the makeup applications and prosthetics each year for Halloween Horror Nights at Universal Studios Hollywood.

Three times daily, the Decayed Brigade will perform and entertain guests within the Hall of Shadows as they showcase the art of sliding – a scare tactic that was created 40 years ago by monsters roaming the streets of Ghost Town at Knott’s Scary Farm. These men and women push their bodies and the laws of gravity to the limit in high-energy demonstrations that leave fans cheering and astounded.

Midsummer Scream is excited to present 9 stand-alone mini haunt experiences that allow fans to preview things to come this Halloween season. From home to pro haunts, guests may sample the handiwork of some of Southern California’s hottest haunted attractions throughout the weekend at no extra cost with paid admission to the festival.

Featured at Midsummer Scream 2016 are:

Fear Station: Escape the Windigo – The harvest moon has awoken the Windigo from its slumber, and the creature is hungry for blood. No one is safe from the beast as it hunts its prey in the darkness. Will you escape the season of the Windigo?

Dead Zone 805 – Fight for survival as you enter the zombie-filled post-apocalyptic world where infection and violent gangs threaten you every step of the way!

Savage House – Every family has a secret… Enter the home of the Wytner clan, a family that has lived in the rural countryside, kidnapping tourists passing by for years. Witness the atrocities as they taunt and torture the unsuspecting victims that have ended up in their home.

Perdition Home– Houston, we have a problem! The notion that in outer space, no one can hear you scream simply isn’t true. Venturing into the depths of an ill-fated spacecraft, everyone will hear you cry for mercy when you face the horrors within.

The Fleshyard– Not every home is safe. Madness lingers beyond the threshold of a decrepit old cabin, concealing evil so vile that those who manage to escape will never be the same. The Fleshyard is a bad place. A very, very bad place…

Higgins Manor – You’ve wandered into the most feared place in the Old West: the Higgins & Co. Work Camp. Can you survive the rowdiest, most dangerousest, most horriblest clan of townsfolk this side of Deadwood? Why don’t y’all come take a gander and see feryerselves?

Spooky Hollows– Follow the trail of a madman through the basin swampland, where he attempted and failed to achieve mortality. Through sick and twisted science experiments, he left a trail of wasted souls in his wake before falling victim to his own worst nightmares.

Scareventures Presents: Sea of Terror–To date, man has explored less than 5% of Earth’s oceans. Perhaps there’s a reason why… Take a terror trip into the depths where undersea creatures lie in wait as you attempt to escape your watery grave. If dead men tell no tales, then where do the stories come from?

Gorlesque: The Haunted Burlesque – Are you “perfect” enough to join the Weltschmerz Society? Come find out and experience a naughty taste of the frights, frills, and frolic that awaits you this Halloween in Los Angeles!

“Hall of Shadows is one aspect of Midsummer Scream that I am most excited about,” said Rick West, Creative Director of Midsummer Scream. “When I think of Halloween, I instantly think of haunted houses; stand-alone attractions as well as home haunts are the very essence of the season. It’s completely thrilling to bring nine very different haunt previews to our guests in an environment that is totally unique to our show. Midsummer Scream’s Hall of Shadows is the closest anyone is going to get to the spirit of Halloween during the summer, and our haunt partners are ready to bring the terror!”

Tickets are now on sale, with new information regarding Midsummer Scream updated frequently at MidsummerScream.org.

Joe Kleimanhttp://wwww.themedreality.com
Raised in San Diego on theme parks, zoos, and IMAX films, InPark's Senior Correspondent Joe Kleiman would expand his childhood loves into two decades as a projectionist and theater director within the giant screen industry. In addition to his work in commercial and museum operations, Joe has volunteered his time to animal husbandry at leading facilities in California and Texas and has played a leading management role for a number of performing arts companies. Joe previously served as News Editor and has remained a contributing author to InPark Magazine since 2011. HIs writing has also appeared in Sound & Communications, LF Examiner, Jim Hill Media, The Planetarian, Behind the Thrills, and MiceChat His blog, ThemedReality.com takes an unconventional look at the attractions industry. Follow on twitter @ThemesRenewed Joe lives in Sacramento, California with his wife, dog, and a ghost.
Share
Facebook
Twitter
Linkedin
Email
Print
WhatsApp
Pinterest
ReddIt
Tumblr
Previous articleAsian Attractions Expo Breaks Records Sixth Year in a Row
Next articleMuseum of Flight’s Largest Expansion Opens June 25